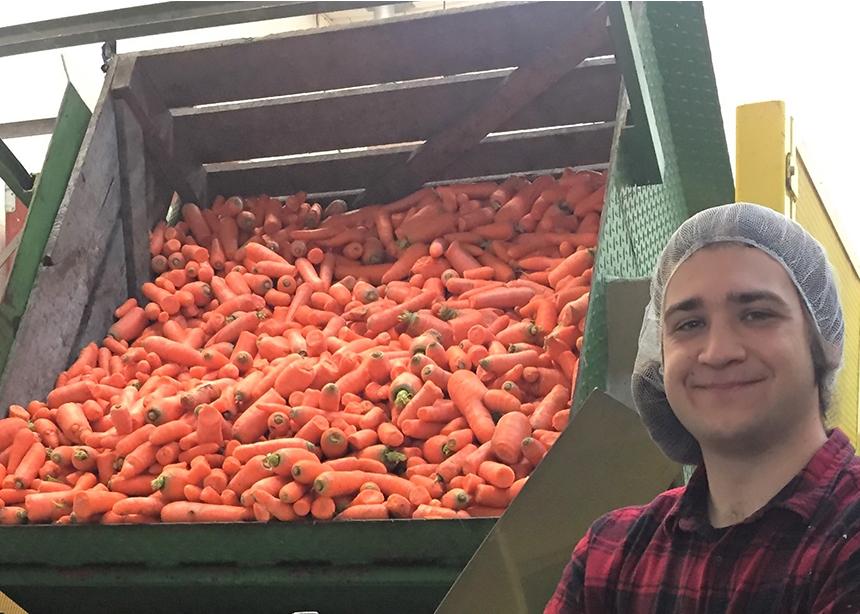 Dylan Ricci Adams is pictured with a load of carrots on their way to the washing machine. (Photo by Zach Charbonneau)

The work of farmers is difficult. They have to work with the land to bring about a decent crop in order to make a living. And even though they may successfully bring hundreds of hectares to fruition, there’s no guarantee that all of that crop can go to market. Blemishes, bruises, deformities and imperfections can be the difference between a piece of food someone will buy and something destined for the trash heap.

The Southwestern Ontario Gleaners is an organization that rescues non-marketable produce and processes it before delivering it to people in need around the world. It gives farmers the opportunity to see more of their crops go to hungry people instead of to the landfill.

Based in Leamington, the Gleaners has made quite an impact since its inception in 2014. In November, it hosted its second Christmas open house to thank volunteers and supporters, and to raise interest in the community by giving tours and letting people see first-hand what the Gleaners do. The Nov. 23 open house hosted more than 175 people, generating new volunteers and new donors.

“It’s all about getting people here,” said Joel Epp, general manager, of the open house.

Currently, the Gleaners operates with a volunteer base of about 300 people, with up to 30 volunteers—often composed of church groups or community members—onsite each day. The work is also made possible by 28 corporate donors, hundreds of individual donors, and, of course, farmers.

“It’s such a community effort, and we’re always looking for ways to grow that community,” Epp said.

The Gleaners receives deliveries by the tractor trailer-load. Recently, 22,700 kilograms of carrots arrived from Chatham. It takes about three-and-a-half hours to process 2,270 kilos for use in dehydrated soup mixes.

Todd Stahl, one of a few Gleaners employees, said, “It feels good to take produce people throw away or turn into pet food, to feed people.”

While the Gleaners is in the business of reducing food waste, its goes far beyond just rescuing produce from landfill.

“All the leftover peeling and cutting go to a local company that produces liquid fertilizer to be spread over Essex county farmlands,” Stahl said, adding that, apart from a few scraps that fall to the floor during processing, waste is almost non-existent in the SWO Gleaners facility.

The entire process of preparing carrots is ingeniously simple:

Once this is complete, the dried carrots are mixed with other ingredients, including previously dehydrated potatoes. Sometimes other ingredients, like broccoli or Brussels sprouts, have been dehydrated and are added to the mix. Beans are added for protein. The dried-soup mix gets packaged with a pack of seasoning and awaits shipment in the warehouse.

Stahl and Dylan Ricci Adams said that there are currently 800,000 servings of food in the warehouse that will soon to be delivered to Haiti and the Dominican Republic.

“The food is donated to other charities, and they do distribution on behalf of the Gleaners,” said Stahl. “Logistics are left to other groups so Gleaners can focus on what we do best.”

At the other end of the process, people in desperate situations are receiving nutritious food that needs a minimum of hot water to rehydrate and eat. Many recipients add their own local flavourings—and sometimes meat—to the mix to create a more robust meal for them and those they share food with.

Some of the international nongovernmental organizations that the Gleaners work with are Canadian Food for Children, Loads of Love and Speroway. These organizations have made connections around the world with communities in need or in crisis and with the Gleaners, which is able to be the bridge between Canadian farmers and a hungry world.

The Southwestern Ontario Gleaners has grown significantly over the past five years. By perfecting its operations since 2014, it has increased its yield from a million meals in its first year and is on track to producing four million by the end of this year. 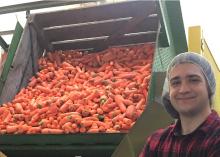 Dylan Ricci Adams is pictured with a load of carrots on their way to the washing machine. (Photo by Zach Charbonneau) 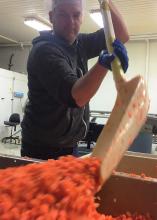 Todd Stahl shovels diced carrots into the auger that will deliver them to the Gleaners’ gigantic dehydrator. (Photo by Zach Charbonneau) 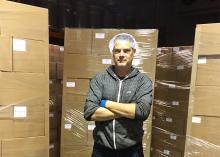 Todd Stahl is pictured in the Gleaners’ warehouse. Each skid has 42,000 meals on it, and the whole room currently holds 800,000 servings. (Photo by Zach Charbonneau)