A former refugee cites gratitude to Mennonites as motivator for generosity 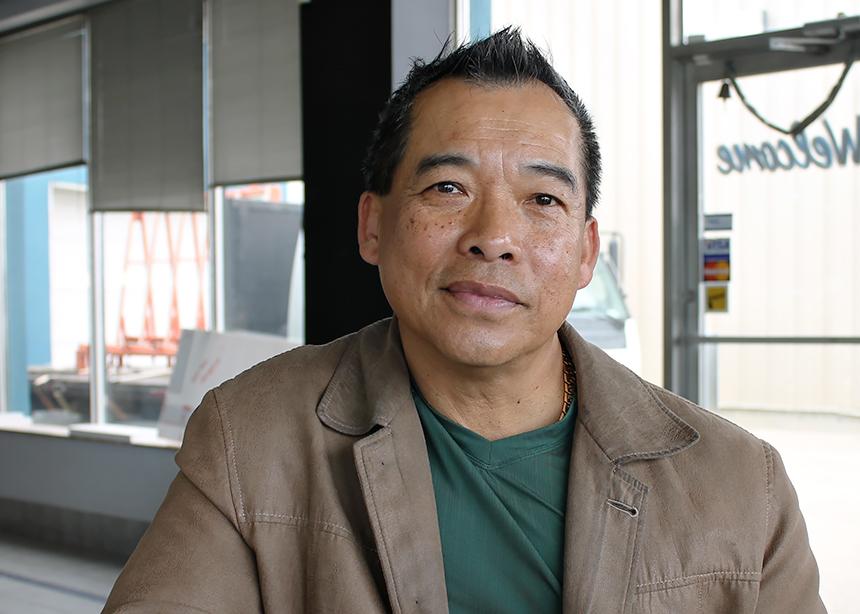 Thang Dinh, owner of Calsask Granite in Saskatoon, cites gratitude to the Mennonites who sponsored him 40 years ago as one of the reasons he likes to give back to his community. (Photo by Donna Schulz)

“We’ve experienced a lot of humbling stories,” says Phyllis Roth of her participation in the Saskatchewan Valley Hospital home-building project, but one story in particular stands out.

When Roth and a group of friends began building a home as a fundraiser for the new Saskatchewan Valley Hospital Foundation in Rosthern, they hoped local businesses would be generous. And they have been.

“Many companies contributed materials at cost or at a discount, and many have given their labour for free,” she says.

But one generous gift and the story behind it touched Roth’s heart.

The group approached Calsask Granite in Saskatoon to install quartz countertops in the high-end home. Calsask replied that it would donate the countertops and the cost of installation—a $9,000 contribution.

Roth met Thang Dinh when he arrived to take measurements for the countertops. When she learned he owned Calsask, she asked him what motivated his generosity. He told her of his gratitude to Canada and to the Mennonites for giving him a second chance at life.

Roth, who attends Eigenheim Mennonite, near Rosthern, told Dinh that she herself is Mennonite. And that’s when Dinh told her his story.

Born in Laos to Vietnamese parents, he was 17 when he defied his parents’ wishes and fled to Thailand. He felt there was no future for him in Laos. Food was scarce, as were jobs. He saw bodies of people killed by the communists floating down the Mekong River every day. He knew he was taking a huge risk but says he felt “it was so crucial” that he get out of Laos.

In Thailand, Dinh ended up in a camp with 50,000 other refugees. Here, too, food was scarce, and there wasn’t much to do. He wrote to his family in Laos, telling them never to come to the refugee camp. But that didn’t deter his older sister and younger brother, who eventually joined him in Thailand.

After a year, he got into a smaller camp exclusively for Vietnamese refugees. Although less crowded, with only 2,000 refugees, there still wasn’t enough food. It was a former Second World War prisoner-of-war camp with barbed wire everywhere, and refugees had to be in their rooms by 7 every evening, he recalls.

Dinh got a job teaching French in the camp, thinking it would be easier than the work his fellow refugees were made to do. One of his French pupils was a girl his age who had come to the camp with her two younger sisters. They were orphans.

He remembers attending Christian services offered by Seventh Day Adventist missionaries. As a Buddhist, he knew nothing about Christianity, but the promise of better food enticed him and he joined a committee to help with these services.

The missionaries introduced him to Mennonite Central Committee (MCC). Through MCC, Dinh and his siblings applied for sponsorship, along with their three “cousins,” the orphan girls who were in the camp with them. These girls, Dinh knew, wouldn’t be accepted for sponsorship without family.

They arrived in Saskatoon on Sept. 27, 1979. Nutana Park Mennonite Church sponsored them. Dinh fondly remembers his sponsors: Bruno and Elsie Neufeldt, John and Edna Peters, and Jake Sawatzky. He became especially close to the Neufeldts, saying, “They were just like my parents.”

He was 19 when they came to Canada, his older sister, 23, and his younger brother, 17. He would later confess to his sponsors that the three “cousins” weren’t really cousins, when it became apparent that he and the oldest girl were romantically attached. She would eventually become his wife.

Dinh started working almost immediately. His first job was cleaning bottles in a soft-drink plant. As soon as he could, he sent money to his 21-year-old sister and her husband, who were also in a Thai refugee camp with their child.

In 1980, he apprenticed as an electrician at the University of Saskatchewan and continued working there until 1996.

Meanwhile, Dinh and his wife had three daughters. Together, they operated a Vietnamese restaurant in downtown Saskatoon for 20 years.

In 2010, he and a daughter purchased Calsask Granite and ran the business together. Sadly, two years later, that daughter died of cancer.

Dinh says he doesn’t need to work anymore. “Working is my therapy.” He currently employs nine people and is very conscious of his responsibility to them. “I do not want to lay any of them off,” he says.

“I’m always proud to talk about the people who helped me,” he says. He remains deeply grateful to MCC and Nutana Park Mennonite Church for sponsoring him 40 years ago.

And it’s this gratitude, in part, that motivates him to give back to his community. “I will forever be grateful to the Mennonites for changing our lives,” he told Roth. 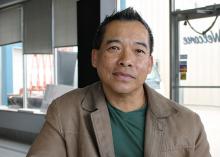 Thang Dinh, owner of Calsask Granite in Saskatoon, cites gratitude to the Mennonites who sponsored him 40 years ago as one of the reasons he likes to give back to his community. (Photo by Donna Schulz)

Thank you Donna Schulz for this great article. We always feel saddened by negativity in regards to immigrants. We too are sponsored immigrants! We come from a very multicultural European background rooted in strong Christian principles that encourage inclusive approaches to the care of "fellow man." We try to look for how differences enrich our lives and how similarities exist across ethnicity, culture and religion. The church groups within the Rosthern area have a wonderful track record of upholding the commandment "love thy neighbour" in the true global sense.