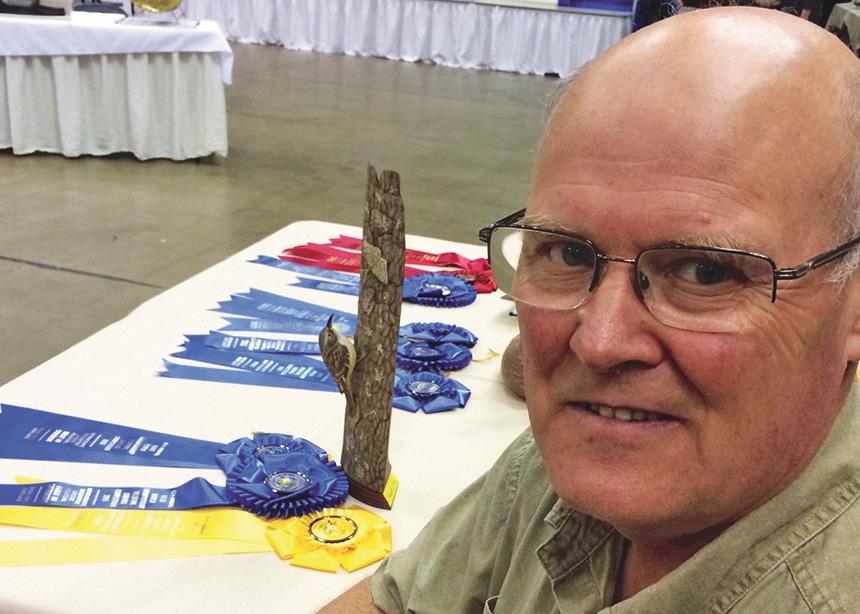 Reuben Unger poses next to one of his wildfowl carvings at the World Carving Championship in Ocean City, Maryland. (Photo courtesy of Reuben Unger)

"Well, I am a strong believer that all people have been given a gift,” says Reuben Unger of Clavet. “Whatever it is, everyone has a gift. If you have a gift, you use the gift, and don’t be afraid to tell people that you think it is a gift.”

The member of Pleasant Point Mennonite Church has a particularly unique gift—wildfowl carving—turning a piece of wood into a realistic bird sculpture. His sculptures are both artistic and incredibly detailed, right down to the hundreds of feather quills that he burnishes on every piece.

As a child, Unger taught himself taxidermy and continued doing that work into adulthood. While he found taxidermy interesting and excelled at it, it wasn’t the creative outlet he desired.

In the 1990s, while at an art show in Saskatoon, he met renowned wildfowl carver Leroy Royer. Unger mentioned his desire to learn the craft and told him that he would love to take a class, if Royer ever taught one.

Unger says: “Lo and behold, a few years later, I got a call from him out of the blue saying, ‘I’m doing a class for some friends, and if you want to join us, you’d be welcome.’ And I said, ‘Absolutely!’ ”

“Wildfowl carving was something that I couldn’t figure out on my own,” he admits, “but the instant we started [the class], I thought, ‘I was meant to do this!’ ”

That first class was in 1998, and Unger has had a sculpture going on his work bench ever since. He is ranked amongst the top wildfowl carvers in western Canada.

The process of creating a carving begins with a lot of research. Unger will spend a week researching a bird.

“I usually take a trip to the Royal Saskatchewan Museum in Regina,” he says. “They have steady skins of every bird in Saskatchewan. Often, I can borrow those steady skins to study in my studio. I also look at a lot of photographs and videos to get a sense of how the bird moves.”

After his research, Unger sketches a two-dimensional drawing of the piece on paper and then transfers that into a three-dimensional sketch on wood. He uses tupelo wood for carving, grown in the southern United States. The sketch on the wood includes all the feathering and anatomy of the bird, true to its actual size, right down to the millimetre.

He then carves, paints and adds all the details to the piece. “Everything is handmade,” he says. “The bird itself, but also the legs, feet and anything else on the piece.”

The realistic precision of a sculpture is not the only feature of Unger’s art,

“I try to tell a story with the piece,” he says. “I did a carving of a kestrel holding a sparrow wing because I was trying to portray the kestrel making an effort to survive, and to tell that story,”

Recently, Unger created a commissioned piece for a person in Texas. “He wanted a sculpture of a roadrunner chasing a Texas horned lizard,” Unger says. “So specific! I’ve never seen either of those creatures in real life before, so it was a real challenge.”

He entered the finished piece in the Prairie Canada Competition held in Winnipeg in May and, to his great surprise, he was awarded second-best in his category, the Carver’s Choice Award and the People’s Choice Award.

“I was just speechless,” he says. “It’s purely a gift that I’ve been given. It can’t possibly be coming from me.”

Unger’s humility speaks to a deeper intersection between his art and his faith: “Carving became a passion, and it’s a lot of fun. It’s relaxing and having time to sit and think. Honestly, I think it’s a gift from God. To this day, when I do a carving, I’m working on it, and when it’s finished, I don’t know how I got there! The hands are just led to do that.” 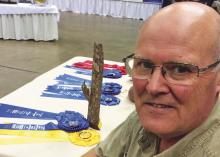 Reuben Unger poses next to one of his wildfowl carvings at the World Carving Championship in Ocean City, Maryland. (Photo courtesy of Reuben Unger) 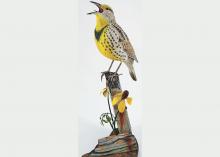 A meadowlark created by Unger. (Photo courtesy of Reuben Unger) 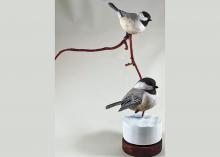