‘The gift of giving’ 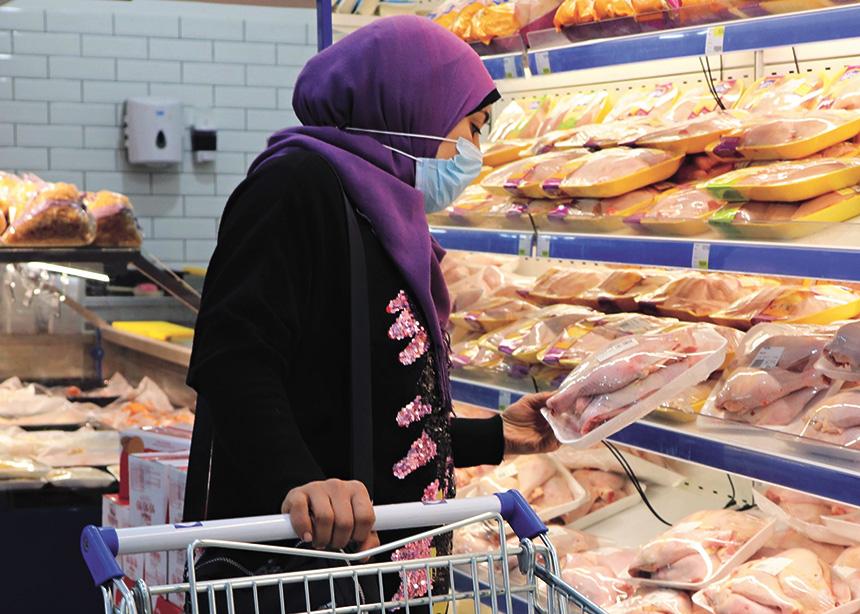 Aziza* shops for meat using monthly food vouchers given to her by MCC’s partner, Popular Aid for Relief and Development (PARD). The vouchers supplement her husband’s income, which is primarily spent on treating their six-month-old son’s lung disease. She uses the food to provide good nutrition to her five children under eight years of age. (*Aziza’s full name is not used for her security.) (Photo courtesy of PARD-2022)

Aziza, a 29-year-old mother living in Beirut, Lebanon, spends almost all of her husband’s income on hospital visits, oxygen and medication to treat her six-month-old son’s lung disease. (Her full name is not used for her security.)

The family, who lives in a one-room house with a leaky roof, had funds for little else, including food, until they started receiving monthly food vouchers. Popular Aid for Relief and Development (PARD), a partner of Mennonite Central Committee (MCC) distributes the vouchers.

“The quantity of food we’re eating increased, and there’s more variety in it,” says Aziza, expressing the relief of being able to feed her five children, all under eight years of age. “What does a mother want other than seeing her children eating and feeling happy?”

She is one of many people in Lebanon whose kitchen cupboards have emptied as economic hardships have continually devastated the country.

The vouchers enabled Aziza to buy things she previously could not, like chicken, milk and cheese—important sources of protein for her children. The food vouchers also have allowed her to save some money to pay for her son’s medical care.

Since 2019, the value of Lebanon’s currency has collapsed by nearly 90 percent and food prices have quadrupled, but salaries have remained the same. The already vulnerable country was further shaken in 2020, when a massive explosion of improperly stored ammonium nitrate in Beirut left 300,000 people homeless and thousands injured or dead.

Add political turmoil, the COVID-19 pandemic and decades of resource mismanagement to the mix, and the combination has caused poverty rates and humanitarian needs to skyrocket in Lebanon.

When PARD’s staff surveyed Palestinian and Lebanese households in six areas of Lebanon, they discovered that most families reported eating only one meal per day, with children getting slightly more, says Mira Moussa, the humanitarian aid project coordinator at PARD.

Many families couldn’t afford meat or even fruits and vegetables.

“In each area you find stories of people who are really suffering,” she says.

Seeing the need, MCC and PARD applied for, and received, a grant worth $761,844 from The Lebanon Humanitarian Fund of the UN Office for the Coordination of Humanitarian Affairs.

Since October 2021, PARD has been distributing monthly food vouchers, each worth about $19 per family member, to 900 households. Recipients also attended nutritional awareness sessions in the beginning of the program.

Lebanon hosts the largest per capita number of refugees globally, most recently from the continuing influx of Syrian refugees. They joined existing Palestinian refugees who found refuge there since the Palestinian-Israeli war in 1948 and subsequent conflicts.

Basam is a 46-year-old Palestinian refugee living in Beirut, Lebanon, with his wife and three children. He asked that his real name not be used. Like Aziza, he lives in an impoverished area of the city known as Daouk.

Basam was a barber for many years, but now he cannot afford to rent a shop. He works numerous jobs to support his family, from being a porter and a guard, to selling water, vegetables, perfumes and hats.

“I have been working day and night for 21 years,” he says. “Everything’s getting more expensive—the least expensive meal now costs a big amount of money, like mujaddara (lentils and rice).”

He uses his vouchers to buy rice, oil, chicken and frozen vegetables.

The vouchers aren’t enough to cover all his food expenses, “but now there is food in the fridge,” he says, whereas what he earned before in a day determined how much he and his family could eat that evening.

The food vouchers offer some stability, allowing recipients to imagine a future instead of just surviving day to day.

“We’re grateful to work tirelessly for the sake of supporting those we serve,” Moussa says. “Every distribution, the beneficiaries come excited to collect the vouchers. They are deeply grateful for this assistance.

“When helping such families who are suffering due to the hard economic situation that we are living [in] nowadays,” Moussa says, “I found the gift of giving in the eyes of those people.” 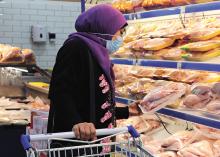 Aziza* shops for meat using monthly food vouchers given to her by MCC’s partner, Popular Aid for Relief and Development (PARD). The vouchers supplement her husband’s income, which is primarily spent on treating their six-month-old son’s lung disease. She uses the food to provide good nutrition to her five children under eight years of age. (*Aziza’s full name is not used for her security.) (Photo courtesy of PARD-2022) 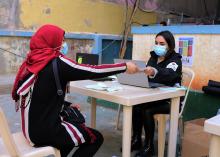 Aziza, left, receives a monthly food voucher from a staff member working for Popular Aid for Relief and Development, an MCC partner. (Photo courtesy of PARD-2022) 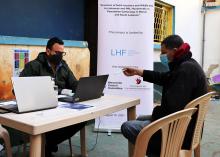 Basam* receives his monthly food voucher from a staff member working for Popular Aid for Relief and Development (PARD), an MCC partner in January 2022. The additional funds keep food in the fridge to feed him, his wife and their three children. (*A pseudonym is used for security reasons.) (Photo courtesy of PARD-2022)