Getting youth to World Conference four years in the making 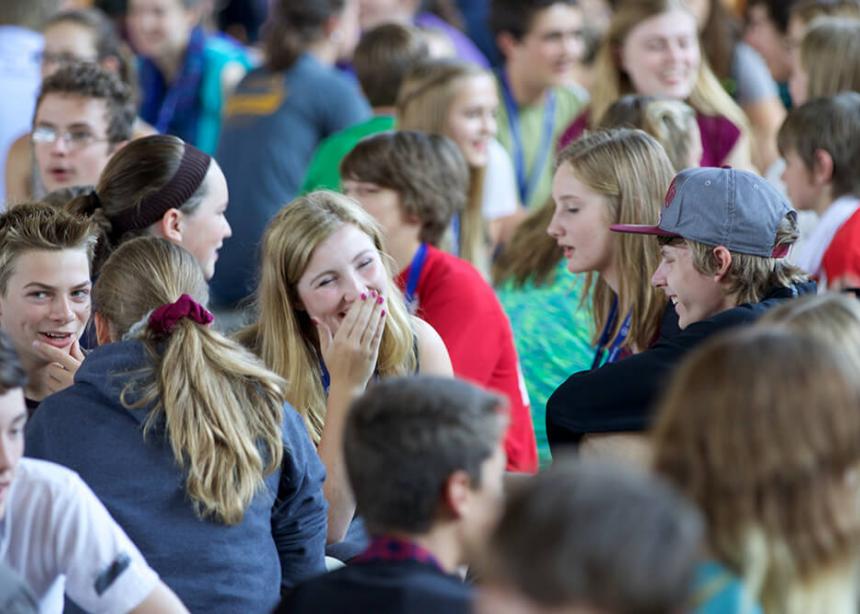 <p>Among the activities the Canadian youth were engaged in during the MWC assembly was finding and chatting with someone they didn&rsquo;t know. (Photo courtesy of Dave Bergen)</p>

Thanks to a great deal of planning, the 310 Canadian young people and their sponsors had the “global experience of a lifetime,” according to Kirsten Hamm-Epp, area church minister in youth and administrative planning for Mennonite Church Saskatchewan, who was the prime mover behind the efforts to get the youth to Mennonite World Conference (MWC) assembly held in Harrisburg, Pa., last month.

Hamm-Epp, who along with her colleague Dave Bergen, executive minister in Christian formation and chief administrative officer for Mennonite Church Canada, were appointed coordinators of the late-evening programming held at nearby Messiah College, where most of the assembly’s youth were staying. The lead-up to the 2015 event was in the works already back in 2011 when, at the Waterloo MC Canada assembly, it was decided that Canadian youth should take advantage of the 2015 MWC assembly.

“This meant keeping the youth assembly two-year cycle out of sync with delegates until after 2015,” says Hamm-Epp. “As a result of that decision, since the Fat Calf MC Canada youth assembly at Camp Assiniboia in 2013, the MWC assembly was promoted as the next large gathering place for Canadian youth.”

As early as May 2014, MC Canada invited youth leaders to put the MWC assembly on their radars and plan to bring their youth to Harrisburg. Throughout fall and winter regular updates were sent to youth leaders across Canada with general MWC information, registration tips, updates regarding a special one-day tour arranged by MC Canada at the Hershey Amusement Park, and more.

“Closer to the Assembly that list was narrowed down to those who were registered,” Hamm-Epp says, “and Dave and I became the point-persons for trouble-shooting and general questions regarding the assembly and lodging for Canadian groups. While we did not coordinate cross-Canada buses or transportation—that was left up to group sponsors or, in the case of Saskatchewan, the area church minister—we worked hard both prior to and during the Assembly to create a special experience for our Canadian groups which would help them bond together as a national group, as well as build on their global experience.”

Each area church responded differently across the country, says Bergen. Mennonite Church B.C., due to the great distance, did not engage anything centrally. However, one youth group from Emmanuel Mennonite in Abbotsford made their way by air to Pennsylvania, led by Chris Lenshyn. Mennonite Church Alberta also sent only a handful of youth, and the sending congregations made their own arrangements.

MC Manitoba, through Kathy Giesbrecht, associate director of leadership ministries, while not coordinating a bus, did provide significant coordination of planning and conversation with youth leaders who brought their youth to MWC. Some of these drove, others flew. One congregation (Fort Garry) rented a small bus and drove their 19 youth and sponsors there.

Mennonite Church Eastern Canada also helpfully facilitated the charter of a bus to bring youth to the assembly, said Bergen. In addition, numerous congregations filled their own vans and cars to get there.

Bergen credits Kirsten Hamm-Epp for the positive experience of the Canadian young people at the MWC assembly. “It was a distinct pleasure to work with her. Her creativity, maturity and energy were an incredible gift to the success of our Canadian youth experience there.”

Read more about the experience of Canadian youth:

Among the activities the Canadian youth were engaged in during the MWC assembly was finding and chatting with someone they didn’t know. (Photo courtesy of Dave Bergen)