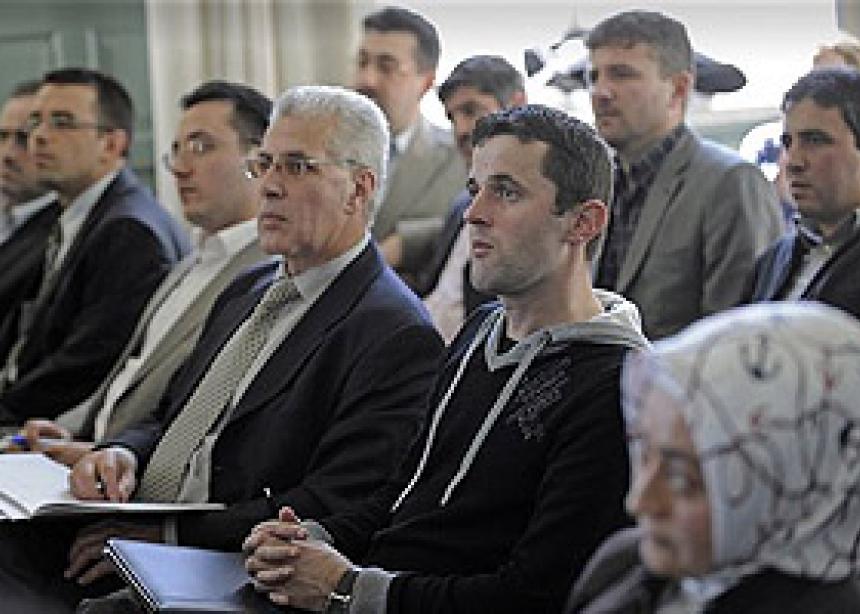 The first program began last year at Osnabrueck University, with another due to start this year at Tuebingen. "The idea was to have a program for imams because most of them are educated in Turkey, Morocco, Egypt or Bosnia," Moussa Al-Hassan Diaw, coordinator of the Osnabrueck program, said in an interview.

"The focus [of their previous education] is very much on theology and the society where they come from, but they don't have enough knowledge concerning the situation in Germany. Some imams don't speak the German language, for example; they don't know [German] history," he said.

The government is providing funding for Islamic theology departments at four universities ˆ Frankfurt, Osnabrueck, Muenster and Tuebingen ˆ that are developing programs focused on interfaith education and the place of Islam in German society.

About 3.5 million Muslims live in Germany, making Islam the second largest religion after Christianity. Conservative commentators and politicians have said Islam is not compatible with Germany's Christian heritage and modern secular culture. In some areas, protests have greeted the building of mosques.

The courses also appeal to Muslims born and raised in Germany, such as Dua Zeitun, a board member of the Al-Khalil mosque in Osnabrueck, where she is responsible for youth work. With diverse backgrounds and ages ranging from 25 to over 60, the class had plenty to discuss, Zeitun said in an interview.

"We had people from the Balkans, Pakistan, the Arab countries but ... we all had the same goal, which was to promote interfaith dialogue as well as teach about Islam," she said.

Despite already being involved in interfaith projects in Osnabrueck, such as organizing church visits for Muslim children, Zeitun said she came away with a better understanding of Christianity and Judaism and what they share with Islam.

A visit to a local synagogue was an eye-opener. "Everyone found it interesting," said Zeitun. "If we look at the stories of our prophets, there are so many similarities. Even in the way we pray ... We also believe in one God and one creator. That is the main, first belief that binds us."

Redzo Sekic, an imam from Bosnia who studied alongside Zeitun, said he had learned a lot about religious freedom in Germany. "It was great to visit churches here, and show others our mosque," he said in an interview. "It was important to see that our work and mission as religious figures is about 99 percent the same as those in other religions."

However, some students said they are frustrated that Muslims are constantly pressured to integrate, but society often seems unwilling to accept them. "I was born here and hope to die here, and I won't let anyone tell me that I am not German enough," said Zeitun. "But I do worry about the youth who have a dilemma as to where they really belong."

Program directors are also hoping they can resist the effect of radical Islam. Earlier this year, two American servicemen were shot at Frankfurt Airport by a young Kosovan Muslim who grew up in Germany and later said he had been radicalized by jihadist propaganda.

"What we have realized, and what [religious teachers] have themselves realized, is that they lose part of the younger generation to Internet preachers, who provide an understanding of Islam that is sometimes more radical or more political-based," said Diaw.

Diaw believes that by giving them the tools to communicate in German and tackle issues such as politics, sexuality and drug use, programs like his can help religious teachers steer youth away from extremism.

He also sees the program playing a role in finding an acceptable place for Islam in German society. "It's to help establish something like German Islam -ˆ it's not a special Islam or a Germanized Islam but an understanding of the Islamic religion that is rooted in Europe, in Germany," Diaw said.