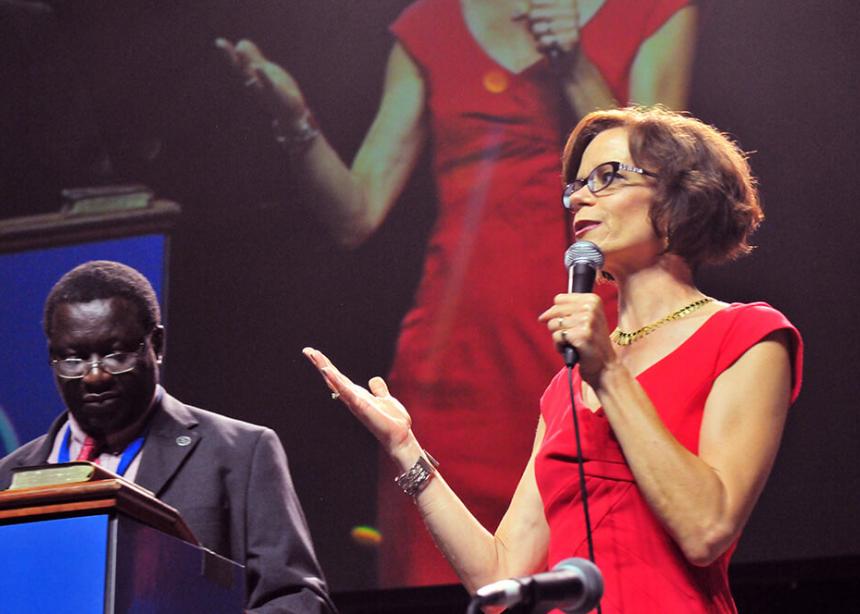 <p>Danisa Ndlovu (left) of Zimbabwe and Janet Plenert of Canada have completed six years as president and vice-president of Mennonite World Conference.</p>

In four days of meetings just prior to the July 21-26 Mennonite World Conference Assembly, the General Council gathered with about 120 representatives from MWC member churches around the world. About half the time involved sharing stories and reflecting on themes of unity and diversity. Members shared stories from Ukraine, Zimbabwe, Panama, Angola, Venezuela, India, South Korea and other countries. A common theme was appreciation for prayers and expressions of solidarity from other MWC member churches.

In their business sessions, the General Council sought to strengthen the organizational structure that make global relationships possible. Each of the four MWC commissions—Faith and Life, Mission, Peace, Deacons—which have been in place for only the past six years, reported on their vision and work. They have a wide range of involvements with the limited funds available to them.

To fund the work of MWC, each member church is asked for a “fair share” contribution based on the “purchasing power parity” of each country. All contributions from individuals and congregations of MWC member churches count toward their fair share.

In an evening gathering, the General Council expressed appreciation for Danisa Ndlovu of Zimbabwe, who is completing his six-year term as the MWC president at this Assembly. The incoming president, Nelson Kraybill of the United States, began his term as president immediately following the Assembly. The General Council also elected Rebecca Osiro of Kenya as MWC vice-president, to succeed Janet Plenert of Canada.

Danisa Ndlovu (left) of Zimbabwe and Janet Plenert of Canada have completed six years as president and vice-president of Mennonite World Conference.