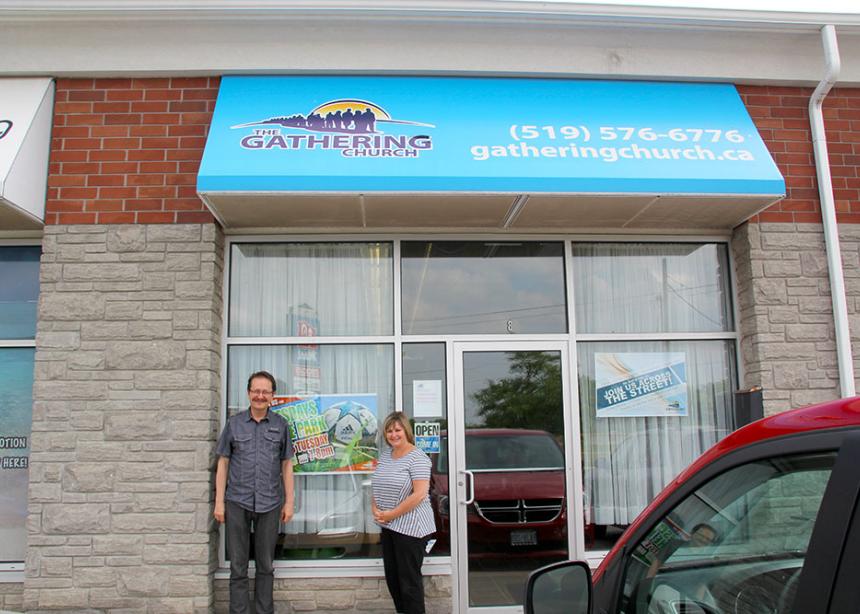 <p>Jim Loepp Thiessen and Catherine Gitzel stand in front of the Gathering Church&rsquo;s store front offices on Activa Ave. in Kitchener, Ont., across the street from the W. T. Townshend Public School, where they gather on Sunday mornings. The congregation celebrated its tenth anniversary in February this year. (Photo by Dave Rogalsky)</p>

Two in three church plants don’t make it past the five-year mark. That doesn’t mean they haven’t been successful, but long life is not part of most church plants. The Gathering Church, a full member of Mennonite Church Eastern Canada, celebrated its tenth anniversary quietly in February this year.

Pastor Jim Loepp Thiessen left a long-term pastorate in 2004 and was working as an interim when he felt the call to make southwest Kitchener his new church home. From the beginning the congregation has been focussed on being in the subdivision, and many folk there consider The Gathering their church, even if they only attend community events like the annual Pancake Breakfast, the Easter Egg hunt, or Tuesdays in the park free children’s activities. Occasionally someone from that scattered community will contact one of the pastors with a need, but mostly the congregation is the 120 or so who meet at W.T. Townshend Public School, including 55 children under ten years of age.

The congregation has four staff—Loepp Thiessen is the pastor, Catherine Gitzel associate, Rachel Brnjas has charge of children’s ministry, and Craig Stephens leads the youth. But there are also a women’s group, a men’s group, a young adult group, and a female youth group. Gitzel also has charge of the relationships with both the Williamsburg and the Chandler-Mowat community centres. At the latter the congregation provides food for lunches for 80 to 100 kids every Wednesday—sandwiches, muffins and veggie packs. All the activities are structured around building relationships. Some kids come early on Wednesdays so they can sit and talk with congregational volunteers.

The congregation sets up and breaks down the worship space every Sunday at the school across the street from the store-front offices they rent. Keeping a good relationship with the school’s principal and custodians is a priority, especially with 55 kids under 10 in the school every Sunday. While they are borrowing space they don’t have to worry about maintenance budgets and have more resources for other projects like the many community events they continue to run after ten years.

The energy in the congregation and its participants is palpable. There is no shirking the spiritual nature of the project—this is a church interested in serving Jesus by serving the community, regardless of whether folk come to the congregation or are simply ministered to. Loepp Thiessen sees going deeper with God, engaging the community in which they find themselves, and developing authentic relationships in that community as continuing goals into the years to come.

He says, “verbal proclamation comes out of serving,” for Mennonites. The Gathering keeps on creating opportunities to do that for its members. He says that Luke 8—the parable of the seeds—continues to inspire him. Not all the seeds they plant will bear fruit but they keep on planting.

Jim Loepp Thiessen and Catherine Gitzel stand in front of the Gathering Church’s store front offices on Activa Ave. in Kitchener, Ont., across the street from the W. T. Townshend Public School, where they gather on Sunday mornings. The congregation celebrated its tenth anniversary in February this year. (Photo by Dave Rogalsky)