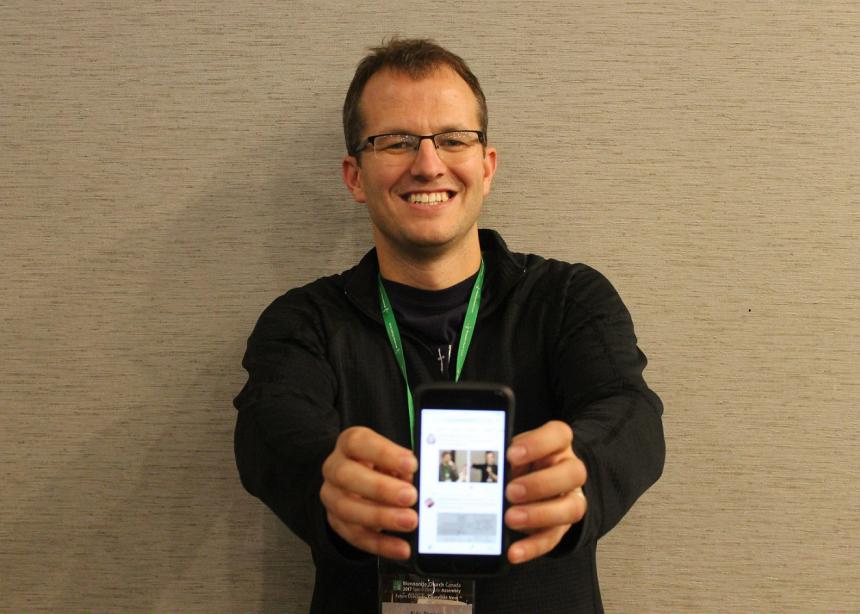 Chandler Burns, interim pastor at Bloomingdale Mennonite Church in Bloomingdale, Ont., was one of more than 15 delegates who were tweeting throughout the assembly, using the hashtag #mcassembly2017 to share their thoughts online.

One of the key reasons she tweeted at assembly, Chandler Burns said, is so that she could report in real-time what was happening to people who could not be at assembly.

“I think of if I were missing [assembly], where would it be easiest for me to follow updates?” the 27-year-old said. “I probably wouldn’t sit and watch the live feed… but there’s a chance I’d check in [on Twitter] and get a sense for what’s going on.”

My own personal reflection: Do we ask what God is calling us to do enough? #mcassembly2017

Between five and ten of Chandler Burns’ friends who weren’t at assembly were following her tweets. A few expressed their appreciation to her via text, and one friend sent her a message on Twitter asking for documents related to assembly so that he could do more research.

Kyle Penner, associate pastor at Grace Mennonite Church in Steinbach, Man., was tweeting throughout assembly for similar reasons as Chandler Burns. “You do it to connect with people who aren’t at your table [and] you do it for the diaspora of people who aren’t here,” said Penner, 34.

Penner was one of the more prolific tweeters at assembly, and his posts ranged from heartfelt expressions to GIFs that gently poked fun at assembly proceedings.

During Saturday morning’s business sessions, when the discussion turned to amendments to the bylaw to restructure MC Canada, Penner was one of a handful of delegates tweeting funny comments. “It’s a humorous way to interact with content that… at times can be less than engaging,” he said.

Micah Neufeld, a youth delegate from Stirling Avenue Mennonite Church in Kitchener, Ont., joined Twitter during assembly. It was the 14-year-old’s first time attending a gathering of the nationwide church, and he said checking the #mcassembly2017 hashtag from time to time to see what people were saying enhanced his assembly experience.

“Usually in this kind of stuff, you’re just sitting there and listening, but [with Twitter] it felt like you were interacting with people even though they weren’t necessarily next to you,” Neufeld said. “It gave you more options for communication, and it opened [you] up to more people's views other than just that of your table.”

Nothing like breaking into song at #mcassembly2017 to restart after a quick break.

Chandler Burns added that tweeting during assembly kept her on task. “This many people, this much discussion, it’s exhausting for me as an introvert,” she said. “[Tweeting] is a really good way of keeping me focused instead of shutting me down.”

It is a good thing my laptop has a long battery life, because I do not know how this would go without Twitter... #mcassembly2017

She discovered this while tweeting at the MC Canada Assembly in Saskatoon in July 2016. “As I was trying to follow along and tweet things as they happened, it actually helped me pay better attention to what was going on,” she said.

For people like Chandler Burns, Penner and Neufeld, Twitter replaced the pen and paper that some people were using to take notes during assembly. “It is a way of note taking in the public sphere,” Penner said. “It’s a way to look back at what you said.”

Those notes can come in handy later when interacting with people in your home congregation, Chandler Burns added. “It’s a good way for being able to report back,” she said.

Tweets about MC Canada’s Special Assembly can be found on Twitter with the hashtag #mcassembly2017.

And, we're done.
Thanks to all the people on twitter for making this better.
Thanks to everyone who had to scroll through a ridiculous number of gifs.
Thanks to those who don't care about church and didn't unfollow me. #mcassembly2017 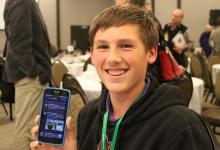 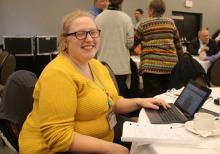