Friendships that go ‘a little deeper’ 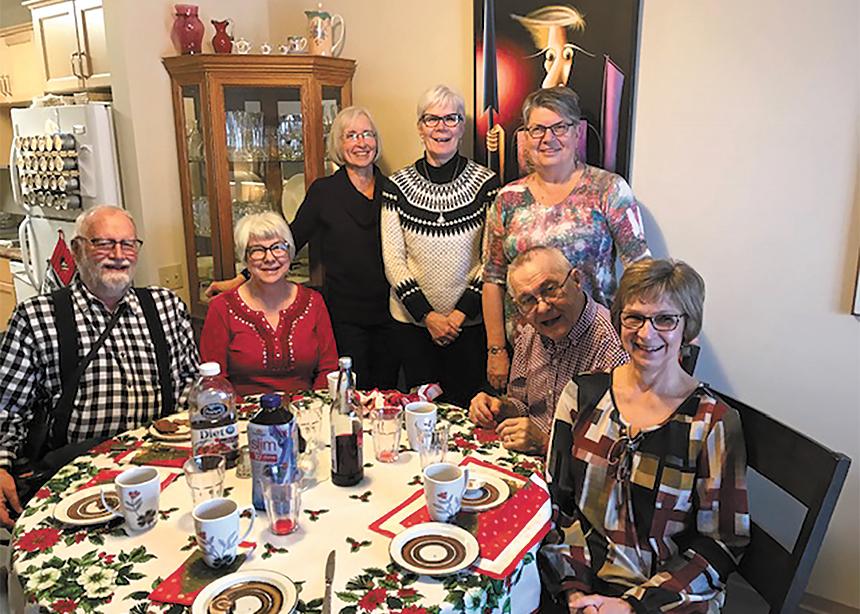 Three years ago, Claire Ewert Fisher was serving as Mount Royal Mennonite Church’s health minister. She knew that some older congregants were facing significant health challenges, so she invited them to be part of a group that could share their struggles and care for each other.

Eric and Verna Olfert have been part of the group from the beginning.

Eric sees it as “a place where spouses of people who are struggling with illness can get support.”

“I’m in a power chair, and Verna is my supporting spouse,” he says. “There are at least two or three other couples who are in that general boat.” He is quick to add, though, that “some people don’t have those kinds of problems but still find [the group] helpful as they go through transitions.”

The group meets each Thursday morning.

“We go around the circle and share what our week has been like,” says Verna. “Sometimes it’s a problem we’ve dealt with, sometimes it’s a funny story, and sometimes a person will say, ‘I don’t have much to share.’ ”

After each person shares, other participants can offer support or practical advice. “Someone may ask, ‘How can I get a ramp on my house?’ Well, we’ve done that already,” Verna says, noting that the experience of others can be a resource to those encountering a new situation.

While most meetings focus on personal sharing, the group has also invited guests to make presentations on relevant topics such as self-care while aging, wills and funeral planning.

Before the pandemic began, the group had a monthly potluck lunch. They occasionally met in each other’s homes, but some homes aren’t accessible for some members, so they usually meet at church.

“Last Christmas, there were a bunch of us without kids coming home, so we all crowded into our place and celebrated Christmas together,” says Verna.

Initially, Ewert Fisher invited people she thought would benefit from participating. But once the core group was established, Eric says they thought together about whom to invite to their group. In addition to regular Mount Royal Mennonite participants, the group has welcomed two couples from outside the congregation.

Several members have died in the intervening years, and the group has supported their spouses as they transitioned to widowhood.

Eric recalls a member telling the group he was suffering from dementia. “He said he had been diagnosed and was still figuring out what that meant,” Eric says. “He shared with us and allowed us to pray over it.”

For Verna, downsizing and moving to a smaller home was challenging. “Each week, we would regale them with what we had to do [that] week, we’d laugh and groan with all stuff we had to do,” she says. And, as Eric reminds her, often there were tears. But, she adds, “The group just carried us through that time.”

Tears are not uncommon in a group such as this. But, for Verna, the conversation and tears are often cathartic, enabling her to carry on with a lighter heart.

During the COVID-19 lockdown, the group met using Zoom. The online platform allowed members to continue being a community, and Verna says she and Eric really looked forward to those Thursday Zoom gatherings.

But, she adds, “On Zoom we had to be so quiet to listen to everyone else. We couldn’t be spontaneous as easily as we can in person.”

After a summer break, the group resumed in-person meetings in September.

The Olferts also belong to another small group in their church that focuses more on book studies and topical discussions.

“The people in [that] small group are also good friends, and have become better friends as part of discussing different topics,” says Eric, “but it isn’t about personal stuff.”

Verna agrees. “We have gotten to know people we wouldn’t have otherwise,” she says of the Baby Boomers Plus group, describing these friendships as ones that “go a little deeper than with just another church member.”

Because he is one of only two males in the group, Eric says his participation is somewhat limited. “It’s not as much about building peer friendships with other guys as I would like,” he says. “But they’re a good bunch of people, and I learn from them as well.”

The Olferts credit Ewert Fisher with the group’s success, describing how she modelled the trust she hoped to foster in the group. “I think she did very well,” says Verna. “She has a gift for that kind of thing.”

Ewert Fisher, on the other hand, attributes the sense of trust to the group dynamic. “They have discovered that this is a safe place,” she says. 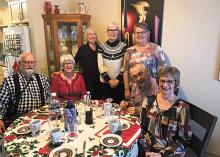