The story of ‘Bees for Burkina’ 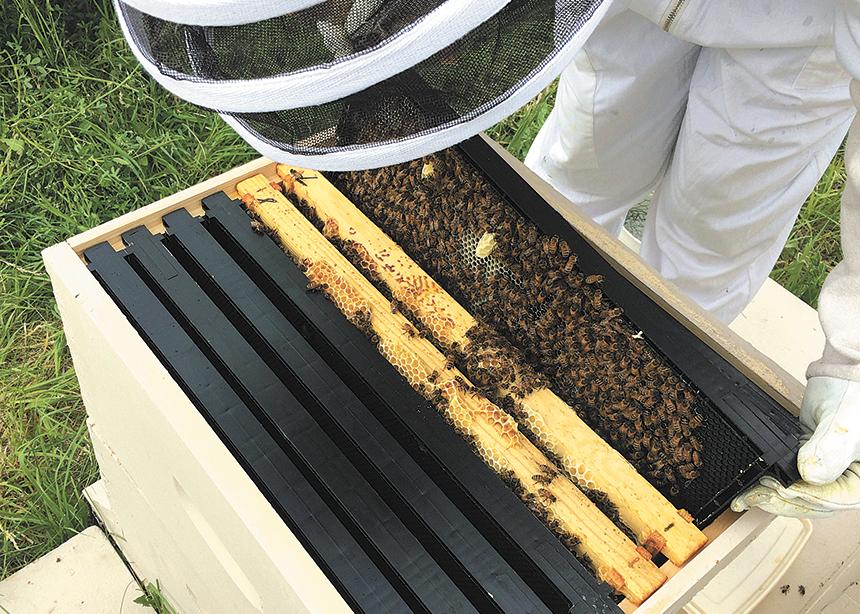 The hard work of some Alberta bees creates a sweet deal for two very different churches. The “Bees for Burkina” project gives people of Foothills Mennonite Church in Calgary a chance to buy local honey, while the profits provide Mennonites in Burkina Faso with financial assistance to build their church. The faith friendship between the two churches is deep, and this initiative helps to ensure their relationship “sticks.”

The story of “Bees for Burkina” is a litany of legacies involving international faith friendship and honouring the memories of two Albertans who have died in recent years.

The story began in 2014, when Foothills welcomed Josue Coulibaly into the congregation as part of Mennonite Central Committee’s International Volunteer Exchange Program. Coulibaly, a young man from the village of Orodara in Burkina Faso, took on the role of pastoral assistant.

“He just naturally had a way of challenging our ethnocentric tendencies, not in a way that was looking for pity, but by showing us how exciting it is to realize we have Mennonite sisters and brothers around the world,” says Doug Klassen, Foothills’ pastor. “Our faith has been broadened. The global church is a beautiful church."

Coulibaly returned to Burkina Faso in 2015 with the friendship between the churches off to a good start. Coulibaly and his family invited Klassen to Burkina Faso to preach at Coulibaly’s wedding in January 2017. The Foothills congregation encouraged Klassen to accept the invitation, and donations covered his costs.

In Coulibaly’s village, Klassen observed that the church had a good concrete floor, but no windows, doors or roof. The congregation had run out of funds and could not complete the building, so the wedding had to be held in a rented tent to accommodate the 500 guests.

While in Burkina Faso, Klassen also spent time with several church leaders. At one meeting, he was asked two pointed questions: “Do you allow women on your church boards . . . and . . . why is the amount of money coming to support International Witness work decreasing?” Klassen explained that women are on church boards, and that the North American church is in decline and that some Mennonites are questioning the “colonial” influences that were part of traditional missionary work.

Bewildered at this answer, one elder replied: “Before the Mennonites came along, we were sacrificing chickens on dirt mounds [a practice in the animist religion in the area]. We are extremely grateful for everything that the Witness workers brought when they came here.”

Before going to Burkina Faso, Klassen had mentioned in a sermon a concern for the plight of bees as reported on mainstream news. Joyce and Jim Harder, part of the Foothills congregation, offered to include him in their new beekeeping venture. Upon his return to Calgary, Klassen told his congregation about the unfinished building and his experiences with the Burkinabé people. He talked about it when out for supper with the Harders, and the pieces for the honey project began to come together. Joyce asked Klassen about using a hive to support Coulibaly’s church.

As the plan unfolded, a second legacy fed into the budding project. Beekeeping supplies were needed, and Klassen remembered that Ingrid Janssen had kept bees near Camp Valaqua. Janssen, a beloved co-manager at the camp, passed away in May 2015, and her supplies were in storage. Jeff Schellenberg, Janssen’s husband, gave Klassen use of the hives. The old boxes were cleaned and readied for bees, and wax from the old hives was melted and formed into candles.

The room where the honey extraction happens is a third legacy. A small kitchen, part of a suite in the Harders’ barn, is the perfect size to keep at 33 degrees Celsius for the extraction process. The suite is where the Harders’ late son, Tim, stayed when he was not working as a ski or whitewater rafting instructor. Tim was killed in 2013 in a tragic accident between Golden and Revelstoke, Alta. The honey extractor fits in the middle of his former kitchen floor. “Tim would have laughed,” she says. Using his room for a project that helps others is a way to honour his memory.

As the honey money was collected, a concern arose for Foothills. How were they going to get it to the Mennonite church in Burkina Faso? Tax regulations in Canada have strict rules that charities must follow to ensure money is used for its intended purpose. With the restructuring of Mennonite Church Canada and its International Witness program, work that had been in progress in Burkina Faso was ending and no new projects could immediately start. Since a roof for a building was a new project, it could not be funnelled through MC Canada.

Eventually, arrangements were made to send the money through Africa Inter-Mennonite Mission. In 2017, the first year of operation, the sale of candles and honey raised approximately $3,200 for the project that Joyce named “Bees for Burkina.” Late this past summer, 228 more jars of honey were offered for sale to people at Foothills, raising approximately $2,000 at the time of this writing.

The church building in Coulibaly’s village is complete, so the 2018 profit will support a church in the village of Fon, as per the request of Burkinabé Mennonite church leaders. The Fon church has experienced a recent growth spurt, with the arrival of Christians who were pushed off their land in nearby villages because of religious and political tensions. Honey money will be used to expand the size of this building.

The partnership between the Foothills and Burkinabé churches is an example of how a mission work can grow naturally and be mutually beneficial.

While the friendship and faith sharing between the Burkinabé churches and the Foothills congregation continues to grow, the issue of how best to transfer funds remains in process as Mennonite Church Canada congregations explore how the new relational model of International Witness partnerships will function. At the time of this writing, MC Canada staff Jason Martin, Director of International Witness, and Willard Metzger, Executive Director, were visiting Witness workers in the Philippines and Thailand. The following is an email interview with them (edited for clarity and length).

In light of the new structure for Mennonite Church Canada, how can individual congregations go about being involved in MC Canada Witness?
Congregations can become involved in Witness through congregational partnerships: through prayer, giving financially and relationship building with a Witness worker or family. Workers also visit Canadian churches, reporting, spending time in fellowship with partner churches, and making new connections. Churches can also organize learning tours to the Witness workers’ country of ministry. This is one way those who participated in the tour can become natural advocates for the workers and ministry.

Congregations can also participate in a Witness Support Team (WST), which would include the above-mentioned connections but would also include an advocacy role of awareness raising and fundraising. The WST is a response to the Joint Council recommendation that Witness workers would be enabled to achieve a minimum of 50 percent of the total costs related to their ministry. The WST is anchored in the worker’s home congregation, or at the very least, in a specific congregation.

Do Witness dollars have to be tied to individual workers attached to MC Canada?
No, Witness dollars do not have to be tied to individual workers but can be in support of international ministries in which MC Canada does not have workers, such as in Ethiopia, Benin, and Colombia. We encourage churches to first support MC Canada Witness workers before those of other agencies and denominations. Some Canadian donors give in support of Mennonite Mission Network (Mennonite Church USA) workers, and we have a joint ministry agreement with MMN that allows for this.

When a church like Foothills develops a relationship with a church overseas, how can they go about supporting a specific project?
Whenever congregations use receipted funds for international ministry they are in risk of not being compliant with the requirements of Canada Revenue Agency (CRA). Because of this, and to preserve good missiological integrity, MC Canada delegates affirmed that international witness should be housed with MC Canada, which has the mandate for this work.

What should congregations be aware of if they want to send funds overseas?
Forwarding receipted donations through MC Canada overseas is not a straightforward matter. All receipted funds must adhere to CRA requirements, which includes being able to show “end use control.” This “end use control” must align with MC Canada’s charitable purposes and annual plans. The Canadian Council of Christian Charities recommends that donors develop an agency agreement with our international partners, in order to send them donations. This would need to include an agreement on how the funds will be spent and a reporting schedule that would verify the expenditures.

Do you have advice for churches as they move into a relational funding model and more local or regional decision-making about overseas work?
Individuals and congregations interested in connecting to an international ministry (hopefully a Mennonite one!) can contact their regional church staff, who will then take that request (and questions) to our office. 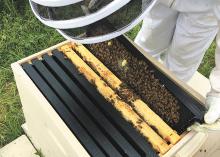 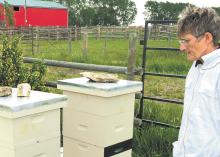 Joyce Harder and the hives that produced ‘Bees for Burkina’ honey. (Photo by Doug Klassen) 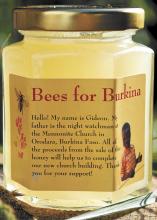 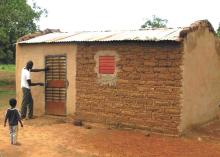 Each Sunday over 55 people meet for worship in the tiny church in the village of Fon, Burkina Faso. The Foothills church honey money from the summer of 2018 will go toward a necessary expansion of the church building since members have increased as some Christians have been pushed off their nearby lands due to tensions in the country. Pictured, Josue Coulibaly’s brother Emmanuel and his son are among the displaced. (Photo by Josue Coulibaly)