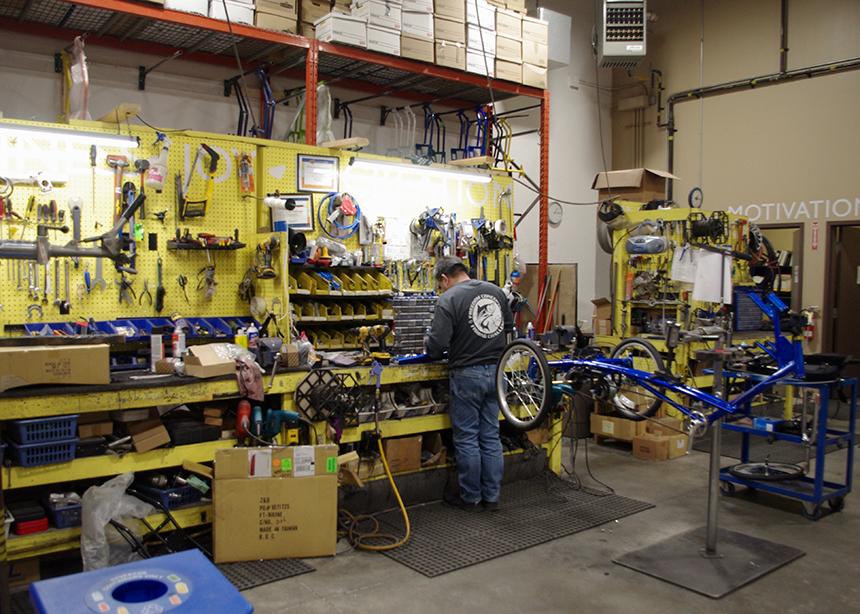 If you ever see a candy-apple-red tandem bicycle cruising through the streets of Winnipeg, you can be sure it’s the Dueck family.

“We go out pretty much daily, weather permitting, from as early in spring as we can go out until as late fall as we can,” says Linda Dueck. “We are well-known in our neighbourhood for the people with the red bike.”

Linda and her husband Rob have two daughters, Amanda and Megan. Megan, 21, has Global Developmental Delay and was born with very low muscle tone. The Duecks purchased a tandem bike from Freedom Concepts Inc. in 2010 so she could have the opportunity to cycle. “It’s an equalizer,” says Dueck. “It gives us the ability to ride, because if we didn’t have it. . . she wouldn’t be able to ride.”

Freedom Concepts has been designing and building bikes for people with disabilities since 1991. The Winnipeg company starts from scratch, welding all of its own frames and getting all the upholstery done onsite. It builds every bike to custom order, assembling each piece in a unique combination based on the rider’s needs.

It also builds what are called “custom custom” projects. Instead of using the typical custom parts the company regularly makes, the team designs and creates each part from scratch to produce a one-of-a-kind bike. In 2016, Freedom Concepts made a bike for conjoined twins in British Columbia.

These are some of Colin Bock’s favourite projects. He is lead engineer at Freedom Concepts and has worked there for 14 years. Bock, who attends First Mennonite Church in Winnipeg, loves the tricky bike orders because he really gets to know the clients through conversations with them, their parents and their therapists.

“No day is the same,” he says. “You don’t get stuck in a rut around here because there’s always something new popping up that needs to be addressed. There’s never a dull moment.”

One of his most memorable projects of 2018 was a bike for a boy born with no arms. The team brainstormed by riding a bike around the workshop, testing out different ideas.

Larry Penner, plant manager, configured the bike so it could be steered with his knees and sent a video to the family of himself riding the bike with his arms hanging at his sides, using only his legs to steer. The boy loved it. He loved the freedom he could have, without any straps or harnesses holding him back.

The team even got to meet the boy when he visited the workshop a few times.

“There is no person that we will not try to build a bike for,” says Penner.

Bock works from Winnipeg while his clients are across North America and even international, so it’s special when he gets to see the effect his work has. “When you can see the individual that you designed your product for actually successfully using the product, then you remember that,” he says.

Megan absolutely loves riding her bike. Other than being a lot of fun, it is an important tool that helps her develop muscle tone. A short ride for her is about three kilometres.

Megan and her parents often end up at a stretch of railway tracks to watch the trains go by, something Megan loves to do.

“We have been stopped many times because we’re sitting there waiting for a train,” says Dueck. “People will get out of their cars and come ask us where we got the bike. We’ve been asked many, many times.”

Before Megan owned her bike, she and her parents were part of a group that tested tandem bikes for Freedom Concepts while they were in development. Children’s Rehabilitation Foundation in Winnipeg also had tandem bikes from the company on loan during the summer, which the Duecks used many times. Megan was finally able to own her own bike through funding from the Foundation.

Bock has gotten to know the Duecks through helping them with bike maintenance that comes with such extensive use. “I’m impressed how many miles they put on the bike,” he says. “We’ve replaced their rear wheels a number of times and helped them fix this, fix that.” 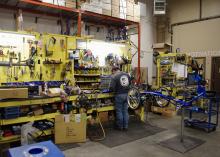 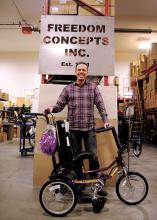