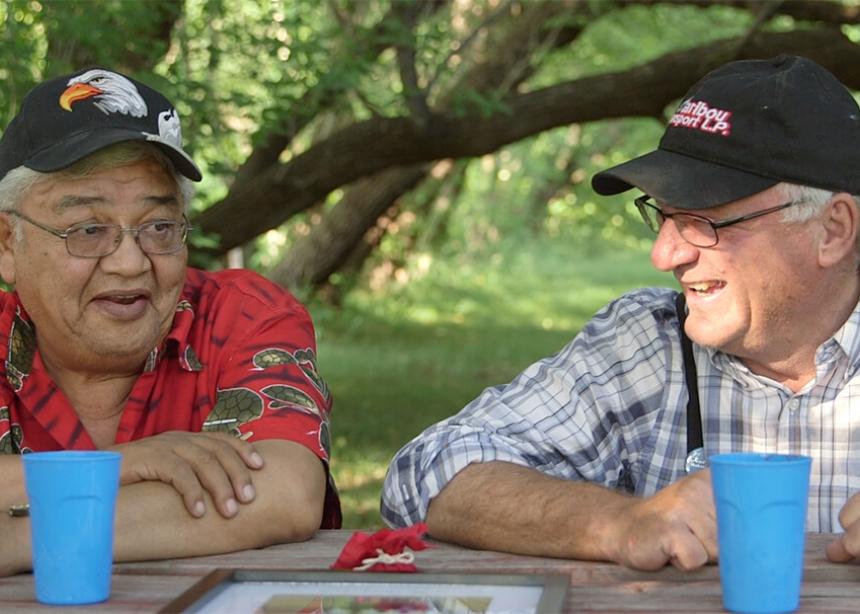 Long before the Calls to Action from the Truth and Reconciliation Commission or the celebrated United Nations Declaration on the Rights of Indigenous Peoples (UNDRIP), we already had a 4,000-page report with 400 recommendations that were praised by chiefs and church officials alike.

The report of the Royal Commission on Aboriginal Peoples was thorough and daring: “In just 20 years the revitalization of many self-reliant aboriginal nations can be accomplished, and the staggering human and financial cost of supporting communities unable to manage for themselves will end.”

Cue the dusty shelf cliché. While gains have been made, orchestrated dependence is still the modus operandi. Government money finds limited traction. The Indian Act remains. Ninety percent of homes in Pikangikum lack plumbing. Suicide crises regularly fall through the gaping holes in the collective ability to effect change. And many Canadians question the current course, understandably.

Now we have the new Murdered and Missing Indigenous Women inquiry and a new wave of official optimism emanating from Ottawa. Where do we Mennonites fit into this picture of perennially frustrated hope? What are the highlights and challenges in our indigenous relations work?

With my personal history in this work, I recall a time when Mennonite Central Committee (MCC) had service workers in five indigenous communities from coast to coast, as well as numerous office staff and summer gardeners in a dozen or so first nations. Now, despite growing acceptance of indigenous people within society and the church, MCC’s capacity has shrunk. MCC Canada is down from two full-time positions in the mid-1990s to one. MCC Manitoba is down from as many as four, to one. MCC Ontario is bucking the trend with two nearly full-time staff.

The gardening program is gone, and while MCC has staff in Timmins, Ont., and Happy Valley-Goose Bay, Labrador—areas with large indigenous populations—it no longer places people in first nations themselves. This mirrors international work that leans toward work with local partners, instead of sending people.

In broad strokes, we as a church are doing less work in first nations and more work among ourselves—learning tours, church presentations, publication of educational materials, MCC’s Myth Perceptions website (8,000 unique visitors in the last two years), films and the like.

Steve Heinrichs, MC Canada’s indigenous relations director, visits many churches and publishes materials that include input from leading theologians and thinkers. But he also says that if we do not move beyond listening and educating ourselves, these can become “another form of resource extraction.” Educating ourselves is a beginning, not an end.

Lyndsay Mollins Koene uses the term “listen into action” to express the same idea. As Indigenous Neighbours coordinator for MCC Ontario, she straddles education and action. She shares about an especially meaningful learning tour that resulted in a group of northern elders making a reciprocal visit to the Leamington area. She speaks about sending seed potatoes, instead of gardeners, and responding to a request from the youth council of Attawapiskat to assist in building a youth gathering place.

She also talks about making the water run in Pikangikum, where the absence of water and sewer infrastructure is particularly severe. MCC collaborates with Habitat for Humanity, the Anglican Church, the Assembly of First Nations and a couple of engineers to put plumbing into homes of the most vulnerable people. Ottawa has agreed to match the more than $400,000 the group has raised.

In Saskatchewan, MCC continues to be instrumental in efforts to seek redress for the Young Chippewayan Band, whose reserve land was given to Mennonite settlers in 1898. As documented in the film, Reserve 107, this contentious work has yielded deep connections between Young Chippewayan, Mennonite and Lutheran people in the area. In addition to facilitating relationships, MCC did much of the historical research essential to the Young Chippewayan struggle.  MCC's Leonard Doell speaks with much fondness of the partnerships MCC has developed over his 20 years.

Back in Ontario, Rick Cober Bauman—a one-time “native gardening” participant who now heads MCC Ontario—notes that the MCC office, as well as Conrad Grebel University College and numerous Mennonite churches in the Kitchener-Waterloo area sit on disputed land. He says that, for Mennonites, the relationship with indigenous people is “the most fundamental relationship to heal and get right.”

One step is MCC Ontario’s involvement in a project that will restore the Mohawk Institute Residential School in Brantford to its earlier state, as a reminder for future generations. Mennonite Disaster Service is also involved.

While all these of projects follow MCC’s decades-old practice of responding to indigenous invitations, they still enter the fraught territory of giver-receiver dynamics.

Heinrichs says we should embrace that risk. “We often play it cautiously because we don't want to mess up,” he says of the fear of slipping into colonial patterns. But he encourages church groups to carefully discern how to engage within the context of relationship and rooted in listening, recognizing that “it is going to be messy.” But, he adds, “that’s life, and there’s joy in the mess.”

Another part of the messiness is having constructive discussions with people who question the work. “I’m interested in going to the spaces where there’s all those questions that people have roiling within their hearts,” says Heinrichs. He calls that a “growing edge” for himself, something that requires “a tonne of genuine respect” and a willingness to understand where people are coming from, instead of shutting them down.

As documents, inquiries and governments come and go, Mennonites remain engaged in a wide range of gritty, relationship-based efforts, both with first nations and among ourselves. While we could do much more—the needs are severe and urgent—we have considerably more capacity for this sort of direct engagement than other denominations.

With numerous seasoned staff in place, the confidence of a rich history, a truly rare array of relationships and considerable interest in the pews, Mennonites are well positioned to step up our efforts. Perhaps the challenge now is to learn from some of the best work being done, engage genuinely with the doubters among us, get more people stepping boldly into the messiness of relationships, and be prepared to follow the unpredictable paths to action that relationships yield.

The challenge may also include expanding our theology to better allow us to walk and grieve with people when, despite our efforts, society’s actions do not match the stated optimism of the documents we hold up. 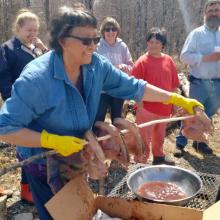 Fish is smoked over an open fire during an Aski (Cree translation for 'land') learning tour. (Photo courtesy of Lyndsay Mollins Koene) 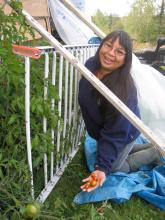 A Sachigo First Nation grows tomatoes to provide food security for herself and her family. (Photo courtesy of Lyndsay Mollins Koene)

This is an interesting summary of Mennonite engagement with indigenous issues, but missing from this analysis is the sobering fact that non-indigenous Canadians, including Mennonites, are not even close to committing politically to the cost of decolonization. First Nations are intimately acquainted with this reality and that's why they have made strategic use of the courts and on occasion blockades and confrontations. The little progress being made has come largely through these hard-fought, lengthy and expensive legal battles and confrontations like Oka and Caledonia. Royal commissions, inquiries, TLC, UN Declarations will all come and go but, in the ongoing absence of political will, First Nations are slowly and inexorably moving towards enforcing reparations for stolen land, broken treaties obligations, and breaches of trust that will support meaningful self-government.

Mennonites and their institutions have been primarily involved in symbolic gestures of relationship building but could make a substantive difference by donating cash to legal defense funds, land claims research offices, mental health agencies, child welfare agencies, infrastructure development funds, the list goes on.
In fact, a golden opportunity has presented itself to MCC Ontario. The much-publicized Maude Lewis painting is raising a substantial amount of money for MCC. I can think of no better use for this windfall than to donate it to the Save the Evidence infrastructure project. Full restoration of the Mohawk Institute Residential School in Brantford is a multi-million dollar project, and sending money rather than job-killing MDS volunteer labour would be an important reset for how Mennonites might move towards a more constructive engagement.