Owners respond to the destruction 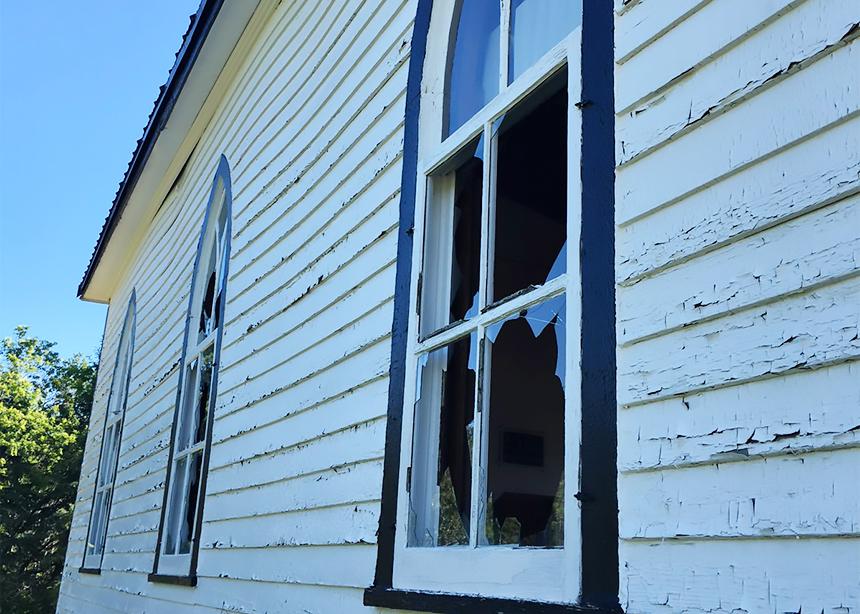 The former meeting place of Horse Lake Mennonite Church had some unwelcome visitors on the evening of June 21. Vandals threw rocks and bricks and broke every window of the historic site. (Photo courtesy of Patty Neufeld)

“When I first saw it, I thought, ‘We might as well burn it down.’” says Patty Neufeld, of the former Horse Lake Mennonite Church building. “It was really depressing.”

The church building was vandalized sometime during the evening of June 21. Though nothing appears to have been stolen, every window in the 111-year-old building was broken.

That evening a local resident drove by the church and noticed a car in the back of the churchyard. The following day, Neufeld’s mother, Esther Jantzen, received a phone call, telling her that the church had been vandalized. She called the RCMP, who came to investigate.

Police found a number of bricks and rocks that were likely used to break the glass, along with several beer and water bottles. Grouped together in one place, they found a beer bottle, a rock, and a handwritten note that read, “Memories don’t throw away.”

Neufeld says she has no idea what the note might mean or who could have committed the vandalism. She wonders whether it might have been the result of a graduation party in the area.

“They threw lots of rocks,” says Neufeld, “as if they were trying to break out as much of the glass as possible.” Rocks and bricks appear to have been thrown from the outside in as well as from the inside out.

Horse Lake Mennonite Church, which had been a Mennonite Church Saskatchewan congregation, closed in 2016 after 74 years as an active faith community. Since then the building has been purchased by Neufeld’s husband, Stan, and son, Matthew. Their hope is to preserve the building as a historic site.

“[We] wanted people [who] have gone to the church over the years to be able to come back and see it,” says Neufeld, who also hopes that people driving by would feel welcome to stop and pray.

This isn’t the first time the church has been vandalized. Fifty years ago, the church’s windows were broken in a similar incident. Neufeld recalls what happened.

“I remember both of my grandmothers walking out of the church with tears streaming down their faces,” she says.

Years later, one of the boys who did it returned to the community as a man and confessed his crime, saying how badly he felt about it.

Over the years, there have been other small acts of mischief, including broken window blinds, damaged books, a defaced Bible and the theft of some cushions.

But most visitors are respectful. There is a guest book in the church, which visitors are encouraged to sign. Neufeld says almost every time she or her husband stop to check on the church there is a new signature in the book. Among the visitors Neufeld knows about is a woman from Duck Lake who goes to the church to play piano.

Neufeld’s daughter, Shelly Anne, set up a fundraiser through Facebook to help raise money to replace the broken windows.

“We’ve had people giving as much as $200,” she says, “and there have been lots and lots of messages. The response has been very supportive, even from people who don’t go to church.”

Meanwhile, the windows have been secured against the elements and the Neufelds are researching replacement options. Some options are more costly than others, but, as Neufeld says, “Anything we do will be a lot of work as we have to remove bits of glass and putty.” 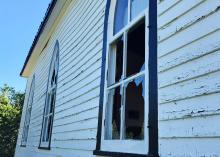 The former meeting place of Horse Lake Mennonite Church had some unwelcome visitors on the evening of June 21. Vandals threw rocks and bricks and broke every window of the historic site. (Photo courtesy of Patty Neufeld) 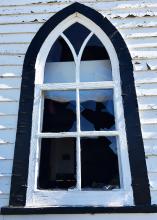 Every window in the former Horse Lake Mennonite Church building was broken when vandals threw bricks and rocks through them, both from the inside and the outside. (Photo courtesy of Patty Neufeld) 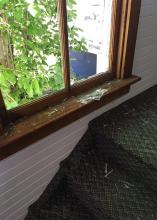