Food waste a resource for change 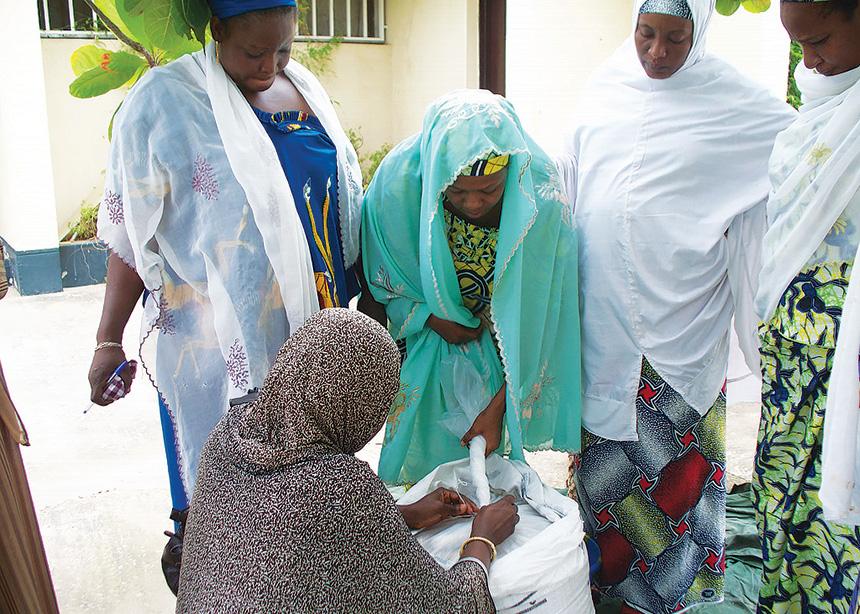 Women carefully close one of the inner layers of a PICS bag, which is designed to protect contents against insect damage. (International Institute of Tropical Agriculture photo / Creative Commons 2.0)

Humanity wastes 931 million tonnes of food each year. This figure—from the 2021 United Nations Environment Programme Food Waste Index Report—is an estimate with an admittedly wide margin of error, but it is probably the best of the wildly varying estimates of food waste in the media.

The energy it takes to produce, process, store and transport this wasted food accounts for up to 10 percent of global greenhouse-gas emissions.

Wasted food is a potential resource

Loop Resource is a Canadian initiative that diverts food from 60 grocery-store dumpsters to food banks and livestock farms. Started by a farm family in Dawson Creek, B.C., it has spread over Western Canada. The initiative reduces feed costs for farmers and disposal costs for stores. It reduces landfill usage and increases availability of food to those in need.

According to the Loop website, the average store they work with produces 270 to 450 kilograms of organic waste daily.

On another continent and at a different point in the food system, improved storage methods reduce food waste in low-income countries. Mike Salomons is a technical advisor with Canadian Foodgrains Bank (CFGB). He says that, in the past decade or so, the organization’s focus has broadened from simply increasing agricultural production, because increased production does not help if, for instance, the grain spoils or cannot be sold for a worthwhile price. The focus now is on “food systems.”

In order to improve food security and livelihoods, it is important to look at post-harvest storage, Salomons says. The most notable advance in this area is the Purdue Improved Crop Storage (PICS) bag, developed at Purdue University in Indiana. A PICS bag is a simple, triple layer bag that can hold roughly 50 kilograms of dry grain. When each of the three bags are individually twisted closed and tied with a string, they form an airtight seal, depriving insects of the oxygen they would need to live.

The bags are available in at least 34 countries in Africa, Asia and Latin America. Since 2007, more than 20 million PICS bags had been sold.

Salomons says the bags have been a “game changer” within the last five years for CFGB and its partners.

Another big focus related to food waste in CFGB’s work has been marketing. In simple terms, CFGB partners help farmers team up so they can market collectively. Better marketing can mean less food goes bad due to lengthy storage periods, and sometimes it prevents scenarios in which produce rots in the field because there is no buyer.

Doug Dyck grows grain near Plum Coulee, Man. He notes the potential for grain to rot in storage if it goes into the bin too hot and moist. This is managed very effectively by ensuring grain is sufficiently dry, and aerating it once temperatures cool outside. Unlike when Dyck started farming, aeration capacity is standard in new grain bins in his area, allowing air to be blown up through the grain.

In the Manitoba climate, winters take care of insect threats in storage.

“Waste is virtually nonexistent on our farm,” Dyck says.

Marg Rempel also farms in southern Manitoba, although her operation includes hogs, goats and chickens, in addition to grain. In terms of livestock, she cites numerous examples of Manitoba farmers using byproducts from food-processing plants:

Rempel says some of these diverted products make up almost 50 percent of some of the 13 different rations she uses for pigs at different stages.

Nathaniel De Avila diverts food on a smaller scale. The 32-year-old Winnipeg building contractor is a veteran dumpster diver. And a deep thinker. When asked about the origins of his interest in waste, he talks about noticing dumpsters at a Frito Lay distributor on his daily commute to Iowa Mennonite School in Kalona, Iowa, as a teenager. After putting two and two together, he and his friends had a virtually unlimited supply of Flamin’ Hot Cheetos.

Now he generally passes up the non-nutritious foods in favour of produce, meat, dry goods and other higher-quality items. While stats about millions of tonnes of waste are hard to comprehend, De Avila sees first hand the “unconscionable” quantities of highly “rescuable” food tossed in dumpsters.

Far from just looking for free snacks, he thinks about the profit motives that create unnecessary waste. The system calculates how to make the most money per item, driven in part by consumers who might act differently if they spent a bit of time draped over the edges of dumpsters.

This still leaves the largest portion of food waste: household waste. The internet abounds with tips for reducing household waste. In many cases, reducing waste involves revisiting some of the old impulses and practices that “progress” has hammered out of our cultures.

De Avila’s challenge is to think carefully, and collectively, about the food system. To ask big questions. This could lead us to a dumpster, a Bible, the CFGB website or, if we follow the stats, to the nether regions of our fridges. 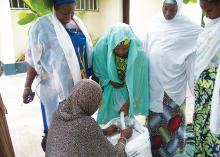 Women carefully close one of the inner layers of a PICS bag, which is designed to protect contents against insect damage. (International Institute of Tropical Agriculture photo / Creative Commons 2.0)