Finding God in my neighbourhood 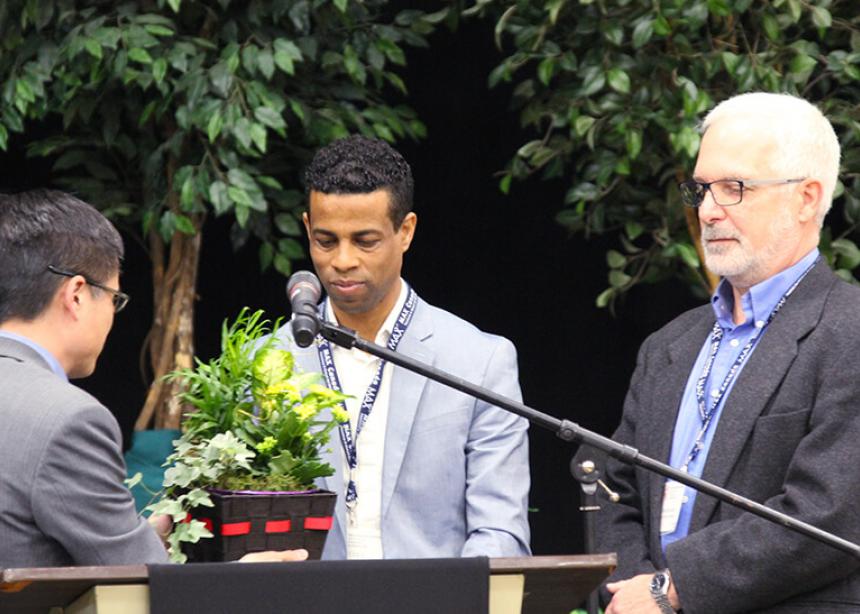 Brian Quan (left) pastor of the Toronto Chinese Mennonite Church, and MCEC assistant moderator, and Missions Minister Brian Bauman give a plant to Jonathan Abraham, pastor of the Shalom Worship and Healing Centre, to welcome the congregation as an emerging congregation in MCEC. (Photo by Dave Rogalsky)

Stuart Murray, author of The Naked Anabaptist, encouraged Mennonite Church Eastern Canada delegates to become mobile temples, moving out of their buildings and into the neighbourhood to speak out the good news of God’s redeeming presence. At the annual church gathering held in Leamington on April 28 and 29, 2016, he encouraged the church to work with non-churched people, meeting the needs of the community, rather than building churches. Murray and Alex Ellish told stories about God at work in their neighbourhoods in Britain.

In his second presentation, Murray explained why he has hope for the future of God’s work in the world. There is a moral vacuum at the heart of western culture, he said, so the Christian story of God at work in the world can help people make sense of the big story of human existence. He called on Christians to be a hopeful minority.

Stories from MC Eastern Canada’s church planters accentuated the missional theme on the afternoon of April 30.

Jordan Thoms spoke of working in an under-resourced neighbourhood in Toronto, where he shepherds a group of about 20 who meet Thursday evenings to worship and study Scripture together. Thoms is one of several young (twenty-something) leaders Colin McCartney shepherds, mentors and trains in Toronto.

McCartney’s wife Judith is working on a church plant among “soccer moms.” After a year, she has many meaningful relationships. Just as Murray taught, she has a long-term commitment to these people and their needs. (Urban Expression in Britain tells their church planters to not even think about beginning worship for at least a year.)

Shalom Worship and Healing Centre, an Eritrean congregation meeting at First Mennonite Church, an intra-cultural Spanish and English congregation in Kitchener, Ont., was accepted as an emerg-ing congregation by the area church.

Michael Monnette and Lynd Renaud, a married couple from near Montréal, were given time to share their vision of a church in the highly secularized environment there. Roi des Rois (King of Kings) meets in a neighbourhood which was “ground zero” in a war between the Hells Angels and Rock Machine motorcycle gangs in the 1990s. One of the former bikers now plays drums in the congregation’s worship services.

ReLearning Community, a program to equip lay and pastoral leaders to reach out into their communities based on local need and congregational passion, and the Anabaptist Learning Workshop, a new effort to train the leaders in both new and older congregations, were highlighted as ways congregations can equip themselves for missional work.

In other business, a balanced budget was achieved through congregational giving and the careful use of reserves. The 2016-17 spending plan was approved. The Legacy Initiatives Fund, based in large part on the bequest of Harold and Enid Schmidt of Baden, Ont., continues to fund new mission initiatives.

The situation of the building and property at 74 Fir Valley Court in Toronto, the site of the now-closed Warden Woods Mennonite Church, has not been resolved through mediation and will probably go to court for clarification on its ownership. The Warden Woods Community Centre claims ownership, but MC Eastern Canada’s legal counsel has said the area church cannot give the building to the Centre since the purpose of the building is no longer a church.

Due to some sexual boundary crossings by MCEC pastors, Carol Penner, is preparing a resource with stories and questions for discussion, to equip leaders and members to name and address boundary care in congregations.

The Future Directions Task Force’s final report took a major time slot on Saturday. In the morning, a report on regional meetings noted that the vote would not be on the “back story,” with its specific ideas for future structure, but only the four-page summary. David Martin, executive minister, noted that consultations have shown that congregations were passionate about MC Canada and missions.

Among those who responded was Dave Tiessen, pastor of Bethel Mennonite Church near Elora, Ont., who challenged the process to look at spiritual and theological perspectives, not only structural and financial ones.

Sylvia Hook of Erb Street Mennonite, Waterloo, Ont., wondered if connections between the five area churches would weaken if there wasn’t a delegate body at the national level.

Several speakers noted that this exercise was probably more about the MC Canada shortfall in funding than anything else.

When the motion to accept the report was on the floor in the afternoon, many questions were aired, including whether there was time for feedback after the MC Canada delegate sessions in Saskatoon in July. Other questions dealt with the implications on national schools, how a national identity could be preserved and how local congregations could support national initiatives without direct connections to the national body. It quickly became clear that there was no strong consensus.

Cyrille Fapoussi of Avon Mennonite Church, Stratford, Ont., said that unity requires a spiritual foundation and suggested the process should be focussed on Philippians 1:27: “Only, live your life in a manner worthy of the gospel of Christ, so that, whether I come and see you or am absent and hear about you, I will know that you are standing firm in one spirit, striving side by side with one mind for the faith of the gospel” (NRSV).

Alicia Good of North Leamington Mennonite Church, Leamington, wondered whether theologians had been engaged in the process.

Questions about international mission continued to be raised. Tom Yoder Neufeld of First Mennonite, Kitchener, suggested an amendment, which quickly drew David Martin and Willard Metzger, MC Canada executive director, into a side conversation. Moderator Paul Wideman spoke passionately about the need for MC Eastern Canada  to maintain a trusting relationship with western area churches, and the need for trust within this area church.

After a break, a revised motion that explicitly stated that MC Eastern Canada delegates would be kept informed of the process over the next two years, and that they would have the chance to vote on a more fully developed proposal, was overwhelmingly accepted.

To see video clips of the annual gathering, go to MCEC’s website: https://mcec.ca/annual-church-gathering-highlights

Brian Quan (left) pastor of the Toronto Chinese Mennonite Church, and MCEC assistant moderator, and Missions Minister Brian Bauman give a plant to Jonathan Abraham, pastor of the Shalom Worship and Healing Centre, to welcome the congregation as an emerging congregation in MCEC. (Photo by Dave Rogalsky)

Jordan Thoms, church planter from Toronto, is introduced by Colin McCartney who works with supporting and training church planters in under resourced neighbourhoods in Toronto. Thoms also released a CD of his Christian infused rap music which was produced with help from the MCEC Legacy Initiatives Fund. (Photo by Dave Rogalsky)

Church planters Lyne Renaud and Michel Monnette, a married couple from near Montreal, share their vision of a church in the highly secularized environment of Quebec at the MCEC annual church gathering. (Photo by Dave Rogalsky)