New Hamburg Mennonite Relief Sale has given every penny to MCC 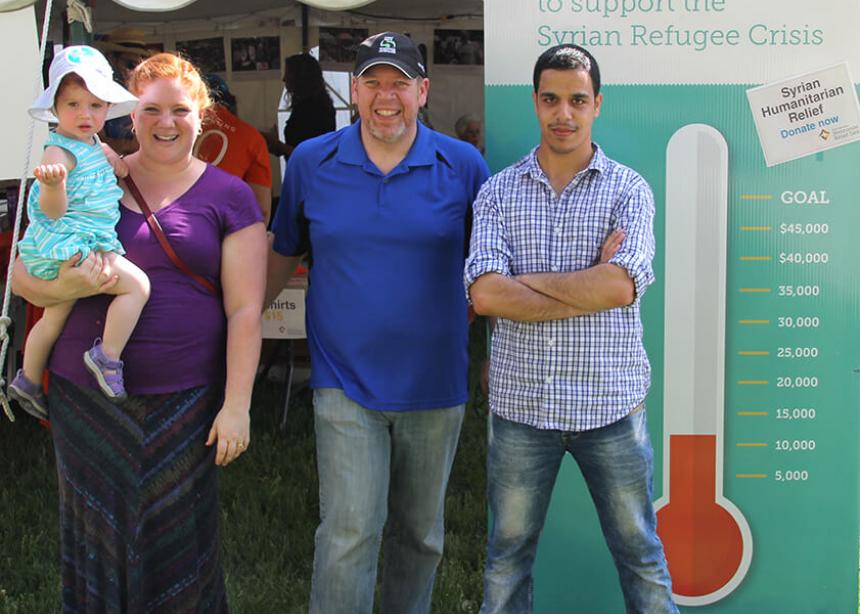 The way Ross Shantz remembers it, his father Ward contacted his buddies from the Second World War conscientious objector camp at Montreal River and they began the New Hamburg Mennonite Relief Sale in 1967.

Following the example of a sale that had begun a decade earlier in Pennsylvania, the New Hamburg group raised funds to cover expenses so that every dollar earned at the sale went to relief. While some balked at the idea of needing to get something in order to give, the encouragement among these frugal Mennonites was to spend more than a thing was worth because it was giving to a good cause.

Over the next 50 years, the sale raised more than $12 million. While not part of Mennonite Central Committee (MCC) Ontario, the Relief Sale and its sister Heifer Sale have given every dollar to MCC for relief work around the world—so far. John Reimer, the current Relief Sale chair, says that the committee has never had to dip into sale proceeds to cover expenses, but he can see the day when that might be necessary. And funds aren’t the only concern for the future.

At the North American Relief Sale Board’s gathering that took place at Conrad Grebel University College the week before this year’s May 27 and 28 sale, many of  the boards noted increased difficulty in finding volunteers. Volunteers are getting older, and younger people do not seem as interested as they were in the past.

Reimer says that the sale has become technologically savvy, but needs to become more so in the future. This makes handing jobs on difficult, as it is not just what the past volunteer knew that is important, but how to implement that knowledge in a new time. That said, though, the new feature this year was a crokinole room staffed by young adults who enjoy playing games.

Another new item this year was a focussed fundraising effort specifically for Syrian humanitarian relief. Shantz convinced the group to try to raise $50,000 for this project; over the two days, cash donations for Syria totalled nearly $4,000.

In total, about $310,000 was raised at the 2016 Relief Sale, with about half of that coming from the quilt auction alone.

Fiftieth-anniversary events included the planting of two trees at the New Hamburg Fair Grounds and the placing of a park bench. At the sale itself, old quilts were displayed and a 50th anniversary tent had memorabilia and photos from years past on display.

As usual, there was a feature quilt among the 230 that were auctioned, and Peter Etril Snyder, a local painter originally from Erb Street Mennonite Church in Waterloo, Ont., painted a work specifically for this 50th-anniversary event, incorporating material from photos and newspapers. The painting was auctioned off for $5,000; it was bought by Snyder’s brother-in-law who says he just “wanted to keep it in the family.”

When thinking about the sale, Reimer says the committee has increased its efforts to show the connection between faith, churches and the sale. Colourful signs at each booth named the congregation doing the selling.

In the 50 years since the sale began, society has changed and visitors do not necessarily understand the connection between Mennonite Christian faith and service to others. That and a continuation of the inter-Mennonite nature of the sale, with Old Colony Mennonites from around Aylmer, Ont., selling traditional Russian Mennonite and Mexican food, and new Mennonites like the Lao and Hmong churches of Kitchener selling spring and egg rolls.

“Different groups working together to help those less fortunate,” Reimer says of their efforts.

At this year’s sale, Muslim volunteers worked alongside Mennonites in thankfulness for the work MCC has done in helping Muslim refugees. 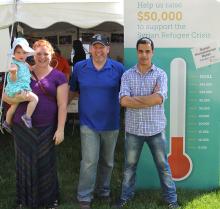 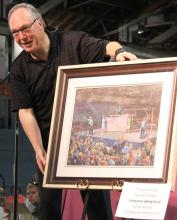