A father’s struggle with his gay son 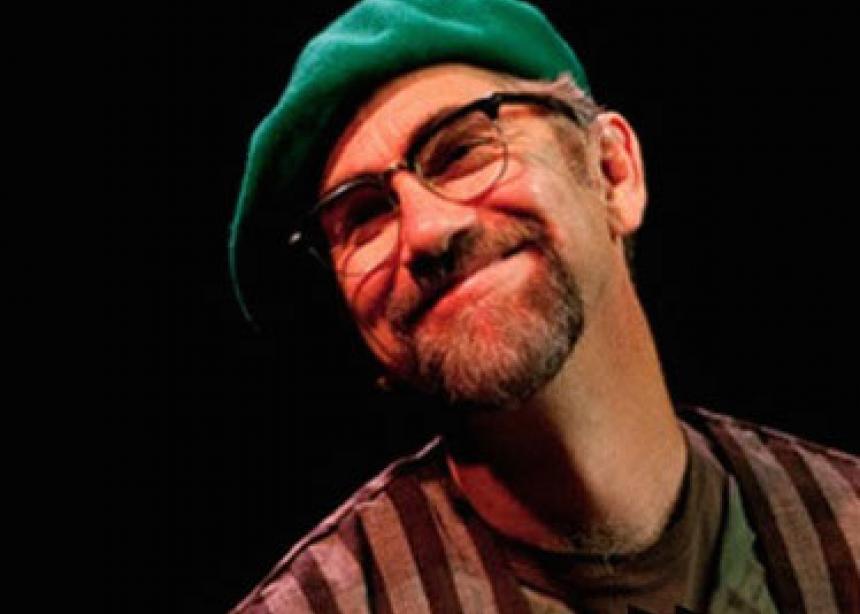 “It’s a good thing you in the church are discussing homosexuality, because otherwise I don’t think you would be discussing sex at all,” was one of many funny lines Ted Swartz threw to an overflow crowd, acting as a widowed father in his 50s named Daryl in dealing with his son, Jared, “coming out” as a gay man.

At a time when the Mennonite church is struggling with persons of same-sex attraction, the hour-long monologue by one of its own brought comic relief to this often-intense subject, albeit with serious undertones. Listening for Grace bills itself as “a play about fathers and sons. It’s a play about faith, about the church, about sexuality, and a play about finding commonality and listening to the stories of others.”

And so it was. I came away from the event emotionally exhausted. While the subtext was very much about sexuality, the complex dynamics of a family and church together experiencing life and death, joy and pain, disappointment and triumph, pulls spectators through a labyrinth of feelings that drains you of emotional energy.

Daryl, the father, first loses his wife Grace. Not fully recovered from that loss, he then thinks, at mid-life, he is losing his son, too, especially when he learns from him, very casually, that he is gay. “Dad, I need to tell you,” Jared tells his father over coffee, “I’m gay.”

Dumbstruck, the shocked father doesn’t know what to say. “It wasn’t what I expected to hear,” says the surprised father. “And I wish Grace was here. I felt pain. I felt confusion. It was hard for him to tell me that, his own father. And I didn’t want him to tell anyone else.”

Daryl struggles with what to do with the new information. “Why does it feel like I’m being asked to choose between my son and my church, between my son and my God?” he asks himself. He reaches out to his extended family, first his own mother, Jared’s grandmother for whom he holds special affection. Daryl is told “she always knew.” She asks him to visit his cousin, Aaron, with whom he shared many a playful moment growing up.

Oh, the wisdom of grandmothers!

Aaron, now living with Michael, the latter of whom has been thrown out by his family, turns out to be gay, too, but has managed with his partner to find his way outside of family and church. Here, the description of life as gay partners, dripping with satire, are some of the best lines in the play. Aaron, playing with his cousin’s emotions, tells him how totally gay his life is.

“Well, after a night of gay sleeping,” Aaron tells him, “Michael and I have a gay cup of coffee. Then we have a gay breakfast [granola] and then off we go to our gay workplace. We come home and make a gay supper. After our gay dining, we play some gay games. Then the cycle begins all over again.”

Like Job, Daryl is also visited by three church friends, all representing various attitudes toward gays presently in the church. First, Mel, appealing to Daryl’s faith, acknowledges a God of grace and mercy, but insists God is also a judge—supposedly of this “sin”—using the well-worn cliché of “God loves the sinner, but hates the sin.” Steve, too, wants Daryl to get on with his life and act like this didn’t happen, while another unnamed friend tells him the most important thing for Daryl is to love his son, just like God loves him.

“This play has no agenda,” says Swartz, “and doesn’t claim to have answers. Instead, it’s a play that takes seriously the idea that the church is a community of people on a journey. It is about journeying with Daryl as he wrestles with questions of life and faith, and, most importantly, we hope this play will encourage audiences to engage in conversation, to tell a great story and to help us think beyond what we first imagined . . . as we listen for grace.”

Swartz, along and his musical accompanists, Patrick Ressler and Justin Yoder, toured southern Ontario for five days in early February 2015. 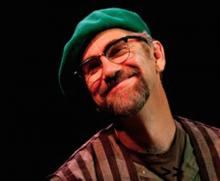 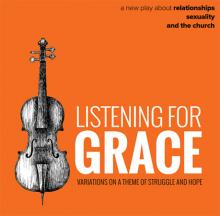 John Zylstra writes that "the well worn cliche of "God loves the sinner but hates the sin", just like the well worn cliche "Believe on the Lord Jesus Christ and you will be saved." is the essence of the gospel." The second statement about believing in Jesus is certainly in the Scriptures. Somehow that cliche about "loving the sinner but hating the sin" never got written into any holy Scriptures. If we want to be truly Scriptural as we discern and proclaim "the essence of the gospel," we would do far better to recognize that such partial "truisms" need to be tested carefully against Scripture and the example of Jesus.