‘A fantastic model at Springridge’

How a small church in rural Alberta picks up the slack for its 0.3 FTE pastor 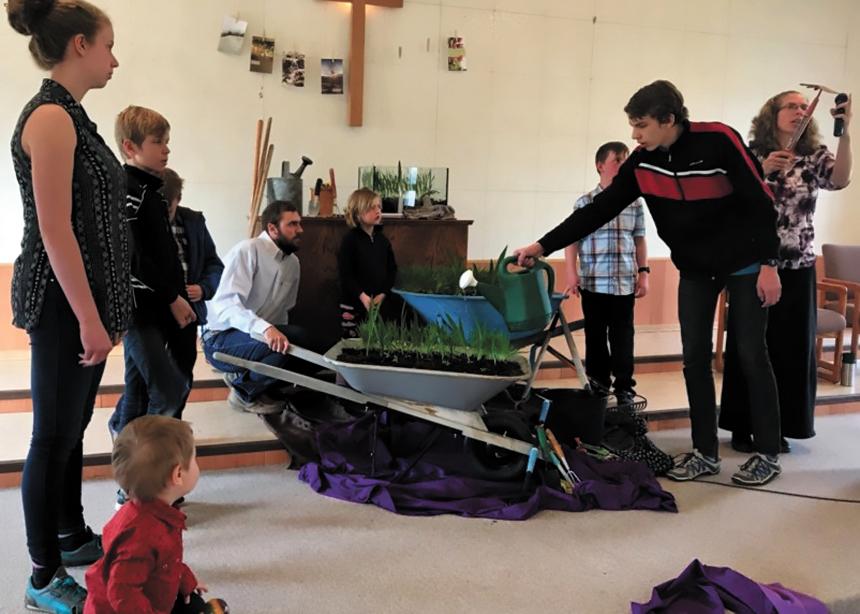 A 2019 Lenten service at Springridge Mennonite Church in Pincher Creek, Alta. Plants were grown at the front of the sanctuary and then compared to how congregants nurtured God-like growth in their own hearts and lives. Pastoral leader Tany Warkentin is pictured at right. (Photo by Del Willms)

A small rural church had a 0.5 full-time equivalent (FTE) pastor. Now its pastor has retired and it decides to hire a 0.3 FTE pastor. Is this realistic? How will the new pastor spend her time?

In January 2019, Springridge Mennonite Church in Pincher Creek approached Tany Warkentin, a long-time member, and asked her if she would be willing to serve as its part-time pastor.

Warkentin had not really thought of being a pastor except as a co-pastor with her late husband Jeff, who passed away of meningitis at age 32 in 2011. The couple had served as Witness workers for five years with Mennonite Church Canada in Burkina Faso, before returning to her childhood home in Pincher Creek that year. She felt that “together” they could have been a great pastoral team. Alone, she knew some of the needed pastoral gifts would be missing.

The only way Warkentin could take this job was to be honest and upfront about her weaknesses. A traditional pastor does preaching, teaching, visiting and counselling, and this was not realistic for a 0.3 FTE position. She felt her strength was not in preaching, so how would that work? Preparing sermons is time consuming and she wondered if that would be the best use of her time.

Leaders and congregants had a frank discussion, and right away there was agreement that the church needed a fresh vision that had to include more people participating in worship and community life. They would do something new. They were all going to be open, no matter their age. Everyone was going to need to step up.

The idea was to break the service up into smaller segments so it would be easier for people to participate. Since sermons mostly focus on head nurturing, Springridge Mennonite decided to shift to more heart nurturing by exploring multi-sensory worship. Warkentin, whose official title is pastoral leader, would act more as a facilitator than as a traditional pastor.

At first, there was some anxiety around what individuals would be asked to do, but relationships in the church are generations deep, with a strong level of trust. It also helped that everyone knew Warkentin from when she was a child growing up in the church.

It was decided that the church would try to find two guest preachers a month. On the other Sundays, alternative ideas would be explored.

“I couldn’t speak highly enough about the CommonWord online resources through MC Canada and the Canadian Mennonite University,” Warkentin says, especially the material the church found for its Lenten, Good Friday and Easter services, including growing and weeding plants; darkening the sanctuary with curtains; holding different objects throughout the service, such as rope and wood; and exposing the light and plants to joyful singing on Easter morning.

Readers theatre, skits, reading excerpts from books, showing video clips and sharing personal testimonies are all used as substitutes or partial substitutes for traditional sermons. Springridge Mennonite will also have someone read a sermon that was written by a pastor, or listen to the audio, on occasion.

Material can easily be found online, including from MC Alberta pastors. On Eternity Sunday, the congregation baked bread during the church service for communion while presenting a reading written by Pastor Chad Miller at Foothills Mennonite Church on Jesus as the “bread of life.”

Recently the congregation worked its way through the book The Bible Unwrapped by Meghan Larissa Good, an Anabaptist pastor. Some of the chapters focus on books of the Bible, including Jonah, Joshua and Job. One person in the congregation read the background of that week’s book of the Bible, another person read the Scripture, and then another read the portion of the chapter that told the story in an engaging way with modern-day applications.

Springridge Mennonite is a congregation of 30 to 35 people attending each Sunday. Three families have children, there are a couple of young adults, and the rest are mostly between 60 and 70. Congregants have found themselves being refreshed and renewed as they do more and the pastor does less.

Warkentin worries when she sees other pastors wearing down, as they are repeatedly expected to perform at a level of excellence in all areas. “I would love to see our churches say to their pastors, ‘We know you are weak in these areas, so we will take that role as a church,’ ” she says. “I think we have a fantastic model at Springridge.” 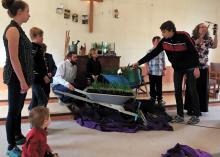 A 2019 Lenten service at Springridge Mennonite Church in Pincher Creek, Alta. Plants were grown at the front of the sanctuary and then compared to how congregants nurtured God-like growth in their own hearts and lives. Pastoral leader Tany Warkentin is pictured at right. (Photo by Del Willms)

Hugo Neufeld, left, a guest speaker from Trinity Mennonite Church in DeWinton, Alta., invites a variety of people from Springridge Mennonite to the front, representing the rich diversity of God's people in the Pincher Creek congregation. (Photo by Del Willms)