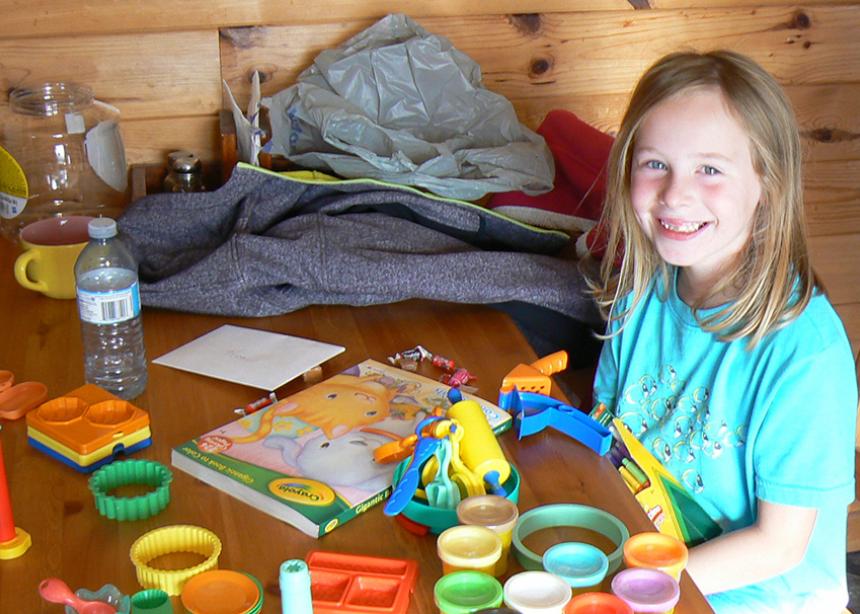 Karalynn Warkentin, 7, loves colouring, playing with her dogs and being outside. (Photo courtesy of the Warkentin family)

The Warkentins are ringing in 2018 as official Canadians, but the journey to reach permanent-resident status was anything but easy. Jon and Karissa Warkentin and their five children, who attend Nordheim Mennonite Church in Winnipegosis, Man., received the announcement they could stay in Canada on Dec. 5, 2017. It came after a long struggle with Immigration, Refugees and Citizenship Canada, which initially rejected the family’s application because of their youngest daughter’s disability.

Originally from Colorado, the Warkentins moved to Waterhen in 2013 to open a lodge for hunting, fishing and other outdoor activities. Karissa says they made the move because they wanted to spend more time together as a family, and she and Jon wanted to teach their kids the value of hard work.

“We wanted to make a lifestyle change so that we could be closer to our kids before they were grown up and gone, and also so that we could pursue more of our passion than necessarily just a career to put food on the table and money in the bank,” she says.

When they decided to embark on this new adventure they had no idea what to expect. “We just prayed about it and felt that God was saying, ‘Yeah, I want you to buy this place.’”

The Warkentins’ business, Harvest Lodge, was successful, and the family quickly became an important part of their community. Even the province of Manitoba supported the family and their contribution to the economy and community.

However, when the Warkentins applied to be permanent residents of Canada in the fall of 2016, they received an unsettling response several months later. Immigration Canada deemed their youngest daughter medically inadmissible because of her disability.

Karalynn Warkentin, now seven years old, is diagnosed with epilepsy and global developmental delay due to a series of severe seizures she experienced several years ago. This means that Karalynn is cognitively around three to four years old, says Karissa. But since the seizures happened all on one day over two years ago, and Karalynn hasn’t had any since then, she doesn’t take any medication for them or frequently visit the doctor. In fact, all she requires is an individualized education program and an educational assistant at school. Yet the federal government still claimed that Karalynn could be a significant burden on the education and medical systems. When the family hired a lawyer and submitted a request for reconsideration, the government rejected it, saying their decision was final.

The Warkentins were then facing the possibility of having to leave everything behind by the end of 2017, when their work permits were set to expire. But when hundreds of people protested and the family appealed to the federal court, the government reconsidered.

“We had almost a thousand signatures on an online petition. It was 95 pages printed out front and back of comments and signatures from people all over Canada and the United States,” says Karissa.

The outpouring of support they experienced overwhelmed the Warkentin family. People from across North America sent emails of support to the family.

“There have been several people who have made anonymous donations to our lawyer for our legal fees, in the amount of like $5,000,” says Karissa. “When you let God . . . truly be in control of your life, He blesses you in ways that you wouldn’t even think to ask for.”

Nordheim Mennonite Church and the Warkentins’ community were strong supports during their difficult year. The Warkentins have attended Nordheim since 2013, when they first moved to Manitoba. Andrew Wiens, pastor of Nordheim Mennonite, says Jon has preached several times and Karissa and her daughter Grace are often involved in worship music.

“We preferred a congregation where it felt more like a family and that there was more active participation,” says Karissa.

The church’s small, family-like community continually checked in with the Warkentins and asked them how things were going.

“We’ve been on the weekly prayer list in the bulletin for the whole year,” Karissa laughs. “When Karissa asked for support or asked for people to write letters to our MPs and to the minister in charge of immigration and refugees and such, there was quite a strong response from people from the church and . . . the community,” says Wiens.

The congregation has been a support by just being good friends, says Karissa. “Some people from our church gave us presents like maple syrup and ketchup chips and coffee crisp bars, and another guy we did some business with . . . he came over with a big huge Tim Hortons gift basket [to say,] ‘Welcome to Canada!’ . . . Now we throw an ‘eh’ in there every once in a while just to be silly.”

The Warkentin family hopes their experience will force Immigration Canada to look at its policy and question whether it actually matches Canada’s current values. For now, though, they are just excited to settle into their new life as Canadians and celebrate with their community. 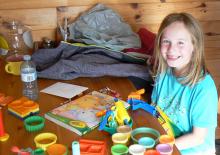 Karalynn Warkentin, 7, loves colouring, playing with her dogs and being outside. (Photo courtesy of the Warkentin family)

Love the smiles and the happy, respectful, honoring of process and laws and the beginning of the story. Congratulations. Welcome.