CMU students use time off from school to record new EP 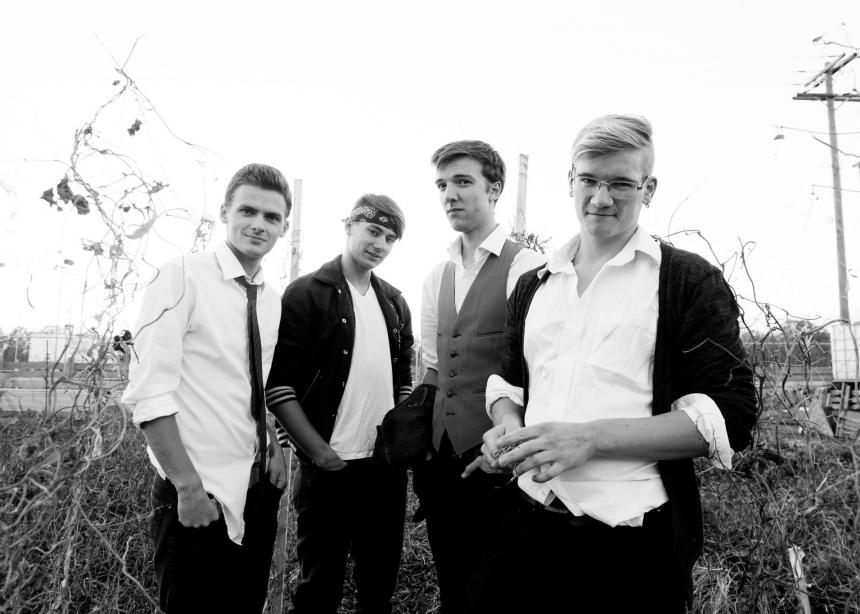 Most university students use reading week to study or go on a quick vacation, but not the members of Pocket Change, a Winnipeg rock band. While their peers were hitting the books or the ski slopes this past February, the band members were busy recording their new EP, Party Culture.

Made up of four Canadian Mennonite University (CMU) students—singer-guitarist Mike Wiebe, pianist Brandon Letkeman, bassist Jonas Cornelsen and drummer Nolan Kehler—Pocket Change spent six days this past February at Private Ear Recording, a popular studio in downtown Winnipeg. Each day, the band worked from 9 a.m. to 11 p.m. on its music. It was an intense schedule, with some recording sessions stretching until after midnight, but the band looks back on the time fondly.

“It was like a family camping trip, just minus tents and with a lot more guitars,” Wiebe says. “We were all pretty inundated with school work, so we kind of said we’ll do less school during reading week and then hit the books hard when school starts up again.”

There’s no telling what impact this had on their grade-point averages, but one thing’s for certain: It resulted in a solid EP. Party Culture is an engaging collection of five experimental rock songs reminiscent of three other Winnipeg bands, all with Mennonite members and connections to CMU: The Liptonians, The Waking Eyes and Royal Canoe. The melodies are strong and the music is firmly rooted in the rock genre, but certain production choices, be it the electronic flourishes, ethereal keyboard lines, stacked vocal harmonies and occasional distorted vocals, give Pocket Change’s music an out-of-this-world sound.

Wiebe credits John Paul (J.P.) Peters, the EP’s lead recording engineer and producer, with helping the band realize its vision. He likens Peters to Willy Wonka. “J.P. was the Candyman,” Wiebe quips, “except that instead of making chocolate, he made our musical dreams come true.”

Peters helped Pocket Change strengthen its songwriting. His knowledge of the studio and experience with the recording process were also assets to the young band.

“His mind is a well-oiled machine,” Wiebe says. “We learned how to make very quick decisions about our music and our arrangements, and get things done very quickly, but still with great quality.”

The result is light years beyond the three-song debut recording Pocket Change released in 2011, some two years after Wiebe formed the band while he was a high school student at Mennonite Collegiate Institute in Gretna, Man.

Wiebe says the band’s lyrics are his observations of everyday events. The EP takes its name from the first song on the disc.

“Nothing we write about is terribly profound in the sense that I don’t think we’re trying to change the world with our poetry,” Cornelsen says. “It’s a collection of experiences and a light-hearted spin on the everyday, and I think the idea of a ‘party culture’ captures that.”

Wiebe says that watching the career trajectory of certain Winnipeg groups has given him an idea of what is possible for rock musicians who come from a Mennonite background. “Seeing local bands like The Waking Eyes and Royal Canoe, and even Alanadale and other bands who have come out of CMU, has enabled me to . . . have more respect for what Mennonites can do, and how our entrenchment in the musical world has so many more possibilities than singing four-part harmony in church,” he says. “Now, we sing four-part harmonies on stage.”

The band members are excited for people to hear Party Culture. They are also in the midst of contemplating their next move as a band. Just like earlier this year, band commitments may take up their reading week this coming February.

“We’ve batted around the idea of taking the EP on tour during reading break, maybe three to five shows in Saskatchewan and Alberta,” Wiebe says. “Can we handle each other for that long? We did it in the studio. Let’s see if we can do it on the road.”