Family of artists share their work in new book 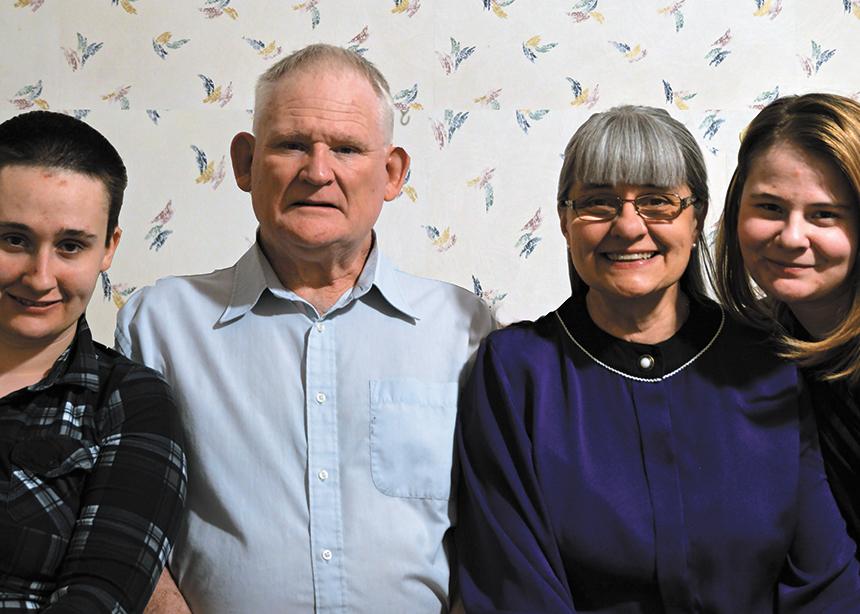 Many individuals dream of writing a book, but it’s not often that an entire family writes a book together. Three generations of artists from the Proudfoot family compiled a book of short stories, essays, paintings, sculptures, photographs, prints and poetry. It was published in February 2019 by Friesen Press.

The idea began with Robert Proudfoot, a member of Edmonton First Mennonite Church for the last 29 years, who worried that the writings and paintings of his mother Norma would be lost. Robert writes fiction and nonfiction, and his daughters are very creative. His youngest daughter, Alicia, recently graduated with a master’s degree in fine arts from the Nova Scotia College of Art and Design in Halifax, N.S., and his older daughter, Annora, plays multiple musical instruments and writes poetry.

According to Alicia, “My father had a dream of bringing all our creativity together. A keepsake we could share with others.” Robert mentioned how their faith journeys intersected with their creative endeavours, just as God creates to communicate with us.

The only family member who doesn’t consider herself to be an artist is Valerie, Robert’s wife, who describes herself as the audience for the art. In order to participate, she did co-write one chapter with her friend Donna Entz. Valerie (nee Braun), was born in Didsbury, Alta., and grew up as a Mennonite pastor’s kid while her father David Braun served as General Conference minister for the province.

The cover of the book, Enduring Art, Active Faith: 3 Generations Create! was designed by Alicia, who thinly sliced and layered pieces of Irish Spring soap for the “clean and fresh” book cover.

Alicia likes her art to include an element of playfulness while exploring complex topics. Her master’s thesis involved making couch art. Her many pieces playfully explore the family couch to show how society is uncomfortable with illness. As a harp player, she has even made a couch harp, which was displayed in the Hernandez Art Gallery in Milan, Italy.

Among her other accomplishments is a 2017 commissioned sculpture for the West Fraser Performing Arts Centre, which replaced the Roxy Theatre after a fire in 2009 in Hinton, Alta. The piece was entitled “The Spectator in Retrospection.” Alicia leaves for Italy in the summer of 2020 to sculpt a one-metre yo-yo from a slab of marble, through a grant from the Alberta Association for the Arts.

Annora, a massage therapist, plays guitar, piano and trombone. The book includes multiple pieces of her poetry, originating from diary entries over a decade. When her father asked her to choose a few selections for the book, she found it interesting to see the repeated themes of faith and relationships. She found herself inspired to have another look at her faith journey and chose to be baptized at Edmonton First Mennonite Church in July 2019 at the age of 29. At her baptism, she read one of her poems that speaks of her view of God, free will, community and the journey of faith.

Robert loves to write and he contributed a variety of nonfiction and fiction pieces collected over his lifetime. Having worked for many years as an environmental scientist, he is now self-employed and has more time to reflect.

The book is divided into four parts and includes the family’s experiences with Mennonite Central Committee in Nigeria from 1988 to 1991. It covers diverse themes with serious topics such as racism, Valerie’s struggle with bipolar disorder, and the loss of family farms, as well as some lighter topics such as a story about a giant radish.

Many wonder if “Proudfoot” is an Indigenous name, but it is actually Scottish. Robert’s family has been in Canada for the last 200 years. Choosing to become a Mennonite and a pacifist was somewhat difficult, says Robert, as his family has a long history of participating in war.

Enduring Art, Active Faith: 3 Generations Create! was a two-year project. It is a hodge-podge of offerings, Valerie says, “there is definitely something for everyone!”

The book can be borrowed from CommonWord or purchased through the family’s website: proudfootfamilyart.ca.

This article appears in the Jan. 20, 2020 print issue with the headline, "Enduring art, active faith." 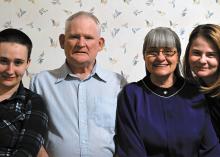 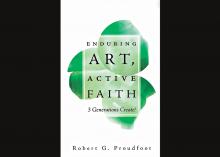 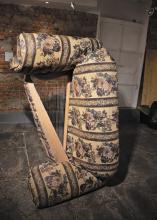