Fair trade under the mask 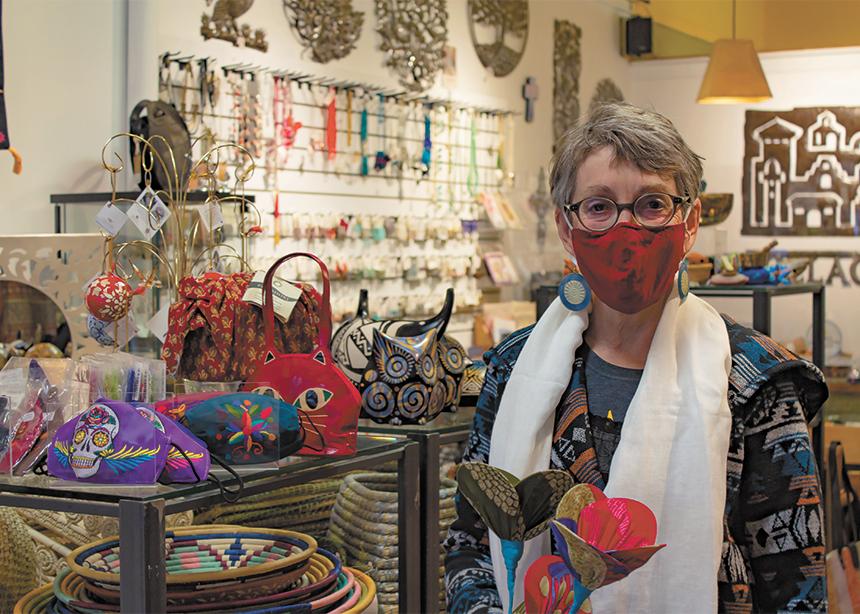 Although most of the Ten Thousand Villages (TTV) stores closed in Canada in the spring of 2020 when the TTV Canada entity ceased to exist, seven stores decided to stay open and continue to offer fair-trade products.

Four of these stores—in Abbotsford, B.C.; Cobourg, Ont.; and Brandon and Steinbach in Manitoba—continued to operate with the TTV brand (tenthousandvillages.ca) through a licensing agreement with Mennonite Central Committee (MCC) Canada .

The other three stores, operating independently, decided to rename their stores. They are now known as Villages Port Colborne (villagesportcolborne.ca) in Ontario; and Villages Calgary (villagescalgary.ca), and Village Goods in Edmonton (villagegoods.ca/service/about).

Most of the managers from these stores share information and ideas with each other at monthly online meetings, and their commitment to creating opportunities for artisans in developing countries to earn income, by bringing their products and stories to Canadian markets through long-term, fair-trade relationships has only grown stronger during the pandemic over the  past year.

Jane Nigh, manager of Villages Port Colborne, says, “Going on our own has given me a new appreciation for the broader fair-trade movement.” As an independent business, the store joined the Fair Trade Federation this past year, in order to give the store the credibility that TTV had given it. “It is opening the world of fair trade to us in a way that we didn’t see earlier,” she says.

The transition to being totally independent has not always been an easy process. Meeghan Gavin, manager of TTV in Brandon, says that the store is now purchasing products from more than 50 different suppliers in more than 30 countries. “We are constantly learning new skills—from social media and advertising, to volunteer recruitment and training—to share the important impact fair trade has on the lives of our artisan partners.”

“The largest challenge of losing [TTV Canada] has been sourcing all the fair-trade products ourselves,” says Derrick Cunningham, manager of the Cobourg store. Many of these products come from fair-trade wholesalers in the United States and involve shipping and duty charges. A new learning curve includes planning, implementing and promoting local campaigns.

Laura Drapeau, manager at Villages Calgary, says that overall sales dropped by 19 percent during the pandemic, while Brandon saw a decrease of roughly 16 percent, and Cobourg was down about 20 percent. A Canada-wide webstore was launched in early 2020, resulting in a great response from fair-trade supporters. E-commerce sales account for roughly 10 percent of total sales.

Manager Roberta Taylor says, “Village Goods’ sales were about 60 percent of the previous year.” A webstore opened two weeks after the beginning of the pandemic to support curbside pick-up sales; half of the sales are now done online and half by telephone.

Due to the pandemic, Villages Port Colborne was closed to in-store shoppers from March till June 2020, January to March 2021, and now again in April and May for six weeks. Other stores also were in lock-down several times. Capacity restrictions and physical distancing are the norms when the stores are not in lockdown.

Another loss facing the stores last year was the cancellation of offsite sales and summer outdoor festivals. Some stores were in lockdown over the Christmas season, which also caused a major loss in revenue.

But Laurie Koop, manager of TTV outlet in Steinbach, says, “We have been consistently busy.” She cites three reasons for the steady pace: People are supporting local businesses during the pandemic; shoppers are realizing that buying fair-trade products helps sustain livelihoods in other parts of the world; and with the closing of the two TTV stores in Winnipeg, city customers don’t mind the hour’s drive to the Steinbach store.

Volunteers continue to be the backbone of these independent fair-trade stores, but it has been difficult to get or train new volunteers with physical-distancing protocols in place due to the pandemic. A few volunteers have had to step back for health reasons, while others still help behind the scenes, unpacking products and getting websites and online commerce working. The hours of operation vary from store to store across the country, as do lockdown orders in the various provinces.

However, fair-trade products continue to be available, and a difference continues to be felt, especially by the creators of the products in countries around the world, say the managers of these seven Canadian stores. 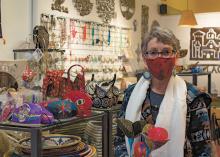 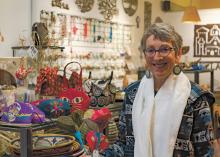 As the manager of the Cobourg, ON store, I thank people throughout Ontario that are passionate about fair trade and who have sought out both the Port Colborne store and our store to help keep the mission going and the fair trade philosophy alive in Eastern Canada.

Thank you to all of my remaining colleagues who are working at keeping fair trade retail alive in Canada! Fight the good fight and prosper in supporting workers around the world. Thank you for your passion!