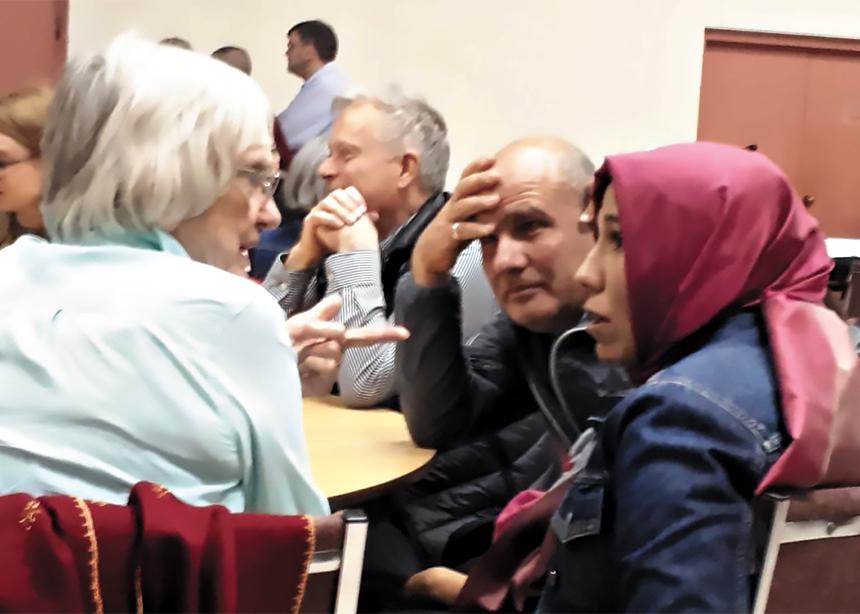 People from different cultural and religious backgrounds enjoy food and conversation around tables at the Iftar meal hosted by Breslau Mennonite Church on May 14. (Photo by Janet Bauman)

On May 14, Breslau Mennonite Church hosted an iftar meal after sunset, marking the end of the daily fast for Muslims during the holy month of Ramadan, a season of fasting, prayer, reflection and charity observed by millions of Muslims around the world.

Each week during Ramadan, a different church in Waterloo Region hosted an iftar meal as a way to nurture understanding and friendship between Christians and Muslims. Breslau and Waterloo North Mennonite got involved for the first time this year, while Floradale and Stirling Avenue Mennonite have participated before in hosting these bridgebuilding meals.

The meal at Breslau, featuring Turkish food, was prepared by volunteers from the Kitchener-Waterloo branch of the Intercultural Dialogue Institute, a non-profit organization that aims to promote respect and understanding among people of all cultures and faiths, and to reduce stereotypes, fears and prejudices. Formed in 2010, it has 11 chapters across five Canadian provinces. Its K-W branch was developed through participation in the Epp Peace Incubator in the Centre for Peace Advancement at Conrad Grebel University College in Waterloo.

Prior to the meal, Salih Kara, an Institute volunteer, took time to explain Ramadan and the practice of fasting in the Muslim tradition. This year, Ramadan stretched from May 6 to June 4. From dawn until sunset, healthy, adult Muslims are encouraged to fast—no eating, drinking (even water), smoking, foul language, gossiping or obscene conduct. Children are introduced to fasting in stages, until they participate fully in their early teens. Fasting is a way to “find freedom from the tyranny of carnal desire,” said Kara.

During Ramadan, Muslims spend more time in the spiritual disciplines of prayer, and reading and reflecting on the Qur’an. According to Kara, Ramadan is a time for Muslims to “draw closer to God by intensifying their faith.”

Ramadan also has a social aspect. It is a time for empathy and compassion for those who are poor or less fortunate. Kara described it as “the month of overflowing with God’s mercy.” During Ramadan, many Muslims prepare food hampers to be shared with those in need, as a tangible way to show gratitude for the “limitless bounties of God.”

Eleanor Epp-Stobbe, Breslau’s pastor, offered words of welcome and led in a prayer of gratitude and blessing for the meal and the opportunity to share around tables across cultures and religions.

Ali Ihsan Okan, president of K-W Institute, offered the Muslim call to prayer to break the fast at sunset. The lines between guest and host blurred, as both communities extended and received hospitality.

Kara told the group that Ramadan is a time to emphasize community. Iftar meals are not meant to be eaten alone. They are meant to be shared with family, neighbours, friends and strangers.

There was an intergenerational mix of around a hundred people gathered from the Muslim community, Breslau Mennonite, other nearby Mennonite churches and the town of Breslau.

Many, who had been fasting all day, chose dates as the first sweet bites to break the fast, as per tradition. The mood was celebratory, with a buzz of conversations around the tables, as people enjoyed the flavourful Turkish meal.

Leon Kehl, who has participated in a number of Muslim-Mennonite dialogue initiatives in Waterloo Region for well over a decade, sees hosting iftar meals as a way for Mennonite churches to demonstrate a commitment “in the public sphere . . . to build bridges of understanding.” It has an “outward focus” that helps neighbours get to know each other; and offers people a way to respond to a series of tragic events in the world, where people, in their places of worship, have been violently attacked and killed. It is a way of showing that “religion doesn’t divide us.”

Kehl shared an email he received from a woman the day after Floradale Mennonite hosted an iftar meal. After expressing thanks for the meal, the warm welcome and the opportunity to learn about Muslims at “more than a superficial level,” she concluded by saying, “It is of the utmost importance these days that we see each other’s humanity, and you provided me with the opportunity to do that, not only with Muslims but also with Christians (I am Buddhist).”

Epp-Stobbe wondered what positive effects might ripple out from hosting an iftar meal at Breslau. Some participants were seen exchanging phone numbers, looking for ways to extend the fellowship begun around a shared table. 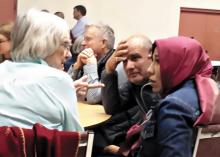 People from different cultural and religious backgrounds enjoy food and conversation around tables at the Iftar meal hosted by Breslau Mennonite Church on May 14. (Photo by Janet Bauman)

I'm all for genuine understanding. After all, if I'm wanting to promote the Gospel by way of a conversation, or series of conversations, with an unbeliever, I really do need to understand their point of view in order to convey to them how the Gospel relates to - *and* conflicts with - that point of view.

I also have no problem with Christians hosting a meal to which they invite unbelievers (whether Muslims or anyone else), if indeed that event promotes genuine understanding and dialogue.

However . . . you lost me with this line: "Ali Ihsan Okan, president of K-W Institute, offered the Muslim call to prayer to break the fast at sunset."

From the Biblical perspective, that isn't a legitimate prayer. Yahweh, the God of the Bible, doesn't accept that prayer. Respectful, back-and-forth dialogue is certainly legitimate - indeed, a *must* - but here it appears you've gone from dialogue to an unbiblical *recognition* of a false religion as if it were on par with God's scriptural revelation of Himself and the Gospel message.

What makes this acquiescence anti-Gospel is that it occurred on "Christian turf": i.e., church property that has ostensibly been dedicated to the glory of God was temporarily turned over to the expression of false religion. If the same event had occurred on neutral ground, such as a community centre, then of course one would expect to hear both religions expressing themselves openly.

By the same token, if Muslims invited me or a church group to visit a mosque, I'd be willing to attend (with the hope of promoting the Gospel) - but I'd fully expect that on their home turf *their* religion would dominate when it comes to open expression. I wouldn't expect them to acknowledge or offer any sort of affirmation of Christianity.

"Thus the people were divided because of Jesus." (John 7:43)

And so it appears to me that Breslau and like-minded churches have contravened the Apostle John's warning: "If anyone comes to your meeting and does not teach the truth about Christ, don’t invite that person into your home (i.e., to promote their false religion) or give any kind of encouragement. Anyone who encourages such people becomes a partner in their evil work." (2 John 10-11)

Ironically, the Greek term behind "partner" there is /koinōneō/, from which we get the well known /koinonia/, "fellowship." In a Christian context that specifically refers to our fellowship *in Christ* - not mere socializing. So when Ms. Bauman speaks of event participants "looking for ways to extend the fellowship begun around a shared table" - what sort of "fellowship" does she mean: genuine spiritual fellowship that honours God - or the sort of "fellowship" that His word condemns . . . ?