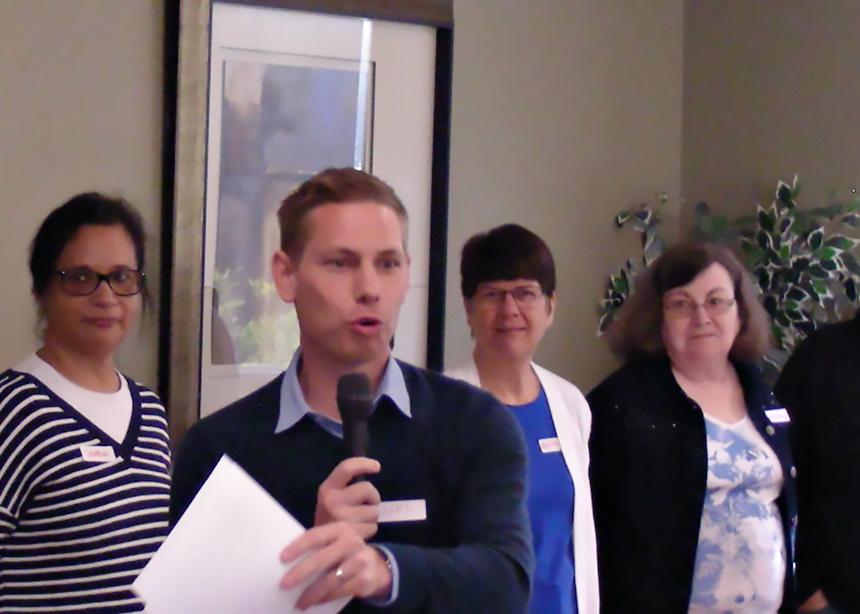 Sociologist Joel Thiessen of Ambrose University in Calgary and president of the Flourishing Congregations Institute, led the seminar, sponsored by the Mennonite Faith and Learning Society (MFLS), and hosted by Columbia Bible College. The event drew 48 participants, among them pastors and laypeople.

The Flourishing Congregations Institute in Canada is currently conducting a comprehensive survey of Canadian churches—Catholic, mainline and conservative Protestant—on what makes a flourishing congregation.

David Leis, MFLS chair, said the idea for the seminar arose because the church is in a time of decline. “Our conference is really struggling; there is a major decline in membership and giving,” he observed.

Thiessen spent the morning focusing on changes in society that have resulted in faith and religion playing a much-less-dominant role in society than they once did. British Columbia has Canada’s highest rate of what Thiessen called “religious nones”—those who claim no religious affiliation of any kind—at 44 percent. These people tend to define religion as the organized church, as opposed to personal belief. Some describe themselves as “spiritual but not religious.”

Those figures sharply contrast with statistics from 1971, when only 1 percent claimed to be “nones.” Thiessen cited social acceptance, apostasy, the rise of Christian fundamentalism and the religious right, and because people raised in the church have left it and then raise their children apart from the church, as reasons for the change. “Things we may have taken for granted a couple of generations ago, we can no longer,” he said.

Understanding the “nones” and being in conversation with them are key to growing the church, Thiessen said. This group tends to be open-minded, and its members are searching for meaning and purpose in life, have an aversion to imposed beliefs, and span the range from theists and deists to agnostics and atheists. Those who have left the church and later return tend to do so for reasons of marriage/children/death, a personal crisis, a personal invitation from someone, or because of parents who remain close and supportive even if the child remains apart from the church.

Today’s parenting styles also differ from those of earlier eras, when families would expect to attend worship services together. Today’s parents are more likely to give children a choice of activities instead of taking them to weekly church services.

In what he called “the most important takeaway of the day,” Thiessen emphasized that “parents are the most important faith influencers,” as they model their faith, instruct their children, and create space and a place for dialogue.

When asked to define characteristics of a flourishing congregation, participants suggested ideas such as:

Congregations cannot be all things to all people, so it helps for congregants  to have a clear vision on equipping and training each other as leaders and disciples.

While religious “nones” tend to be mistrustful of evangelicals, evangelicals also tend to have negative feelings about the “nones,” making bridging the gap between the two groups all the more difficult.

In the afternoon, a panel consisting of April Yamasaki, a writer and Purpose magazine editor;  Tim Kuepfer, pastor of Chinatown Peace Church; James Nickel, former MFLS president; and Mark Birch, current director of Mennonite Brethren church planting in North America, were invited to comment on the Institute’s findings and to share from their own experiences reaching out.

In referring to “the art of neighbouring,” Birch said, “You can’t control the role of the Holy Spirit in evangelism.”

More practically, Yamasaki, the former pastor of Emmanuel Mennonite in Abbotsford, suggested sending postcards to homes in the neighbourhood surrounding a church’s building. 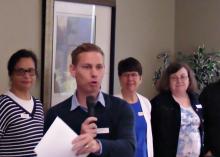