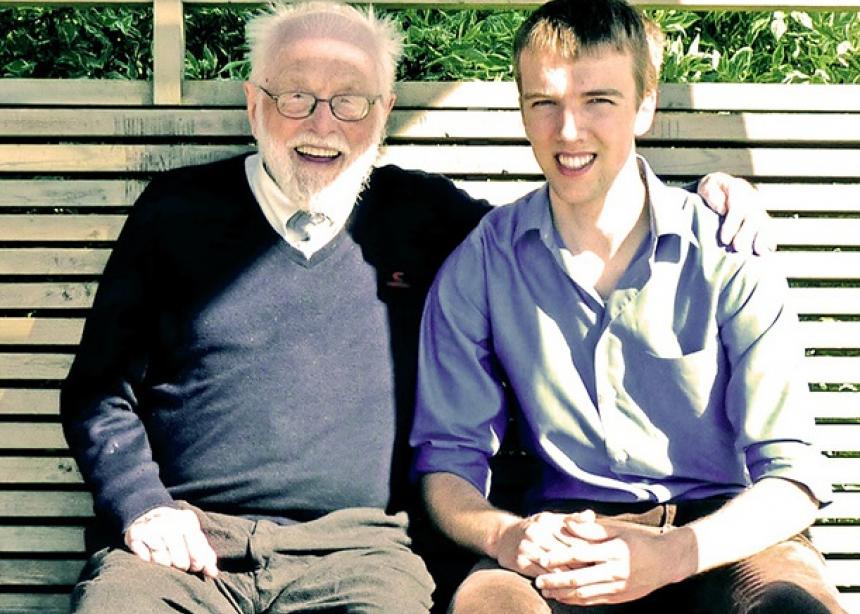 Jonas Cornelsen jokes that, at the age of 22, he’s retired.

While most of his peers are looking to start their careers, the Winnipeg native and recent university graduate moved to Vancouver last month to live with, and care for, his 97-year-old grandfather, Erwin Cornelsen.

Although he is as healthy as a 97-year-old can be, Erwin and his family decided that having Jonas live with him and help him with his daily routine and chores around the house would be beneficial.

“He has a very sharp memory, he speaks well, and he’s very aware of what’s going on,” Jonas says. “That’s so exciting because there’s just so much . . . he can teach and express in terms of his life story and what he’s reflected on, and his own personal faith journey is very interesting. It benefits me to know those stories.”

Jonas lived with Erwin for four months in 2013 while Jonas was working at Erwin’s church, Sherbrooke Mennonite. “He was my roommate, my landlord and my grandfather, and that wacky combination of things really worked out well for us,” Jonas says.

Formerly the pastor of Sherbrooke Mennonite Church, Erwin lives in the same house he bought in 1957, a year after emigrating from Germany to Canada.

When Jonas thinks about the four months he spent with Erwin in 2013, the biggest thing that sticks out for him was observing the ways in which his grandfather’s faith sustains him. “[He] delights in walking through each day and naming where God is at work,” Jonas says.

Erwin’s day always begins and ends with Bible study and prayer, and when he goes to church each Sunday he circulates around the room during coffee hour, checking in with people to see how they are doing.

“Seeing the way that he’s lived for so long, and lived well, really was inspiring to me,” Jonas says. “Interacting with people from other generations really helps us get to know different perspectives on meaning and values and all those things. It’s as good for me as it is for him in a lot of ways.”

Erwin says that he is very happy to have Jonas living with him. “He is a very intelligent person, and very friendly and helpful,” Erwin says. “I couldn’t ask for any better grandson.”

Jonas graduated from Canadian Mennonite University in April with a bachelor of arts degree with double majors in political studies as well as communications and media. He wrote an honours thesis exploring the political theology of A. James Reimer and capped off an impressive undergraduate career by being named class valedictorian as well as being awarded the President’s Medal, given annually to two graduating students in recognition of their qualities of scholarship, leadership and service.

“Living with a guy like my Opa can continue to teach me [those values],” Jonas says. “I’ll have what I need. I’ll even earn a modest wage and all that. But, for me, the importance of doing it is a lot more in trying to walk the talk of caring for each other and expressing alternative ways of living to what we often consider success or a career track.”

Jonas has committed to living with his grandfather for at least a year, after which he, Erwin and their family will decide if a longer stay is warranted.

“Part of what really intrigues me about this opportunity is it isn’t governed by contracts and rules, but it’s genuinely about how we find our security in a relationship and how both of us benefit from this arrangement—economically, physically [and] spiritually,” Jonas says.

Leaving his friends and family in Winnipeg behind has been challenging, but Jonas knows those relationships will be there when he comes out of “retirement.” 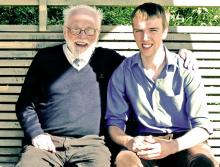 '[He] delights in walking through each day and naming where God is at work,' Jonas Cornelsen, left, says of his Opa Erwin. (Photo courtesy of Jonas Cornelsen)

I don't know which of these two men is more fortunate - the grandson or his Opa. What a wonderful story - heartwarming, fun, enviable! Thanks to Jonas and his Opa for sharing their adventure with us.

I think it's a refreshing new idea to see people working out issues in life to help each other out. Life doesn't need to be about wages all the time, sometimes God calls us to do more important things like taking care of others for a while.