An experiment in generosity 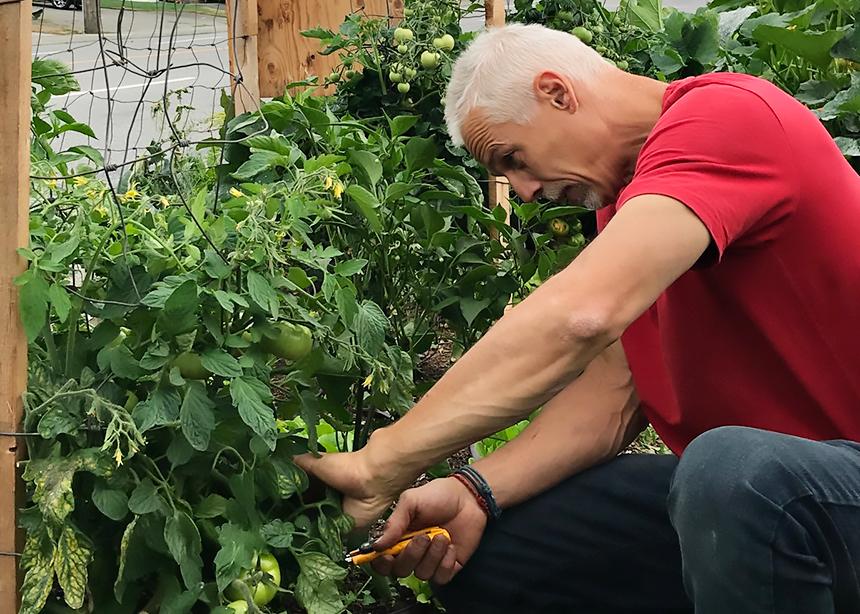 It’s been said “there’s no such thing as a free lunch,” but it turns out there is at Emmanuel Mennonite Church.

Passersby at the church on Clearbrook Road this summer have been seeing a thriving community vegetable garden along with signs inviting them to help themselves to whatever they wish. In addition to English, the signs are in Punjabi, to accommodate residents in the neighbourhood around the church, predominantly immigrants from India.

The idea for a community garden came from church member Al Friesen, a retired teacher who has always enjoyed gardening and had heard of similar gardens in Los Angeles, the United Kingdom and other places.

“I wanted to plant food for the community, to see where it goes,” he says. “We’re Mennonites and have a farming background. Why don’t we grow food?”

Earlier this year he wondered if the space containing juniper bushes at the front of the church property couldn’t be put to more practical use. He approached Emmanuel’s Missions, Peace and Justice Committee with his idea to replace some of the bushes with a garden. When the church council eventually okayed the idea, he set to work clearing out the bushes, and then planning and planting the garden.

The church assisted with costs, and Friesen also got donations of compost from farmers and an irrigation system from a church member. People from the congregation got on board with the garden, including a children’s group, and two neighbours also responded enthusiastically by donating seeds and volunteering to help maintain the garden.

Response to the community garden has been interesting, notes Friesen, who acknowledged that such a project is a risk. Would people coming by either vandalize the plants or take all the produce, leaving nothing for others? The opposite has been true, he says. Some people are reluctant to take anything from the garden, despite the sign that reads “Free food.” People have come to the church door, reports Pastor Bob Boehr, asking, “Is it really free?”

Nevertheless, Friesen feels the project has been a success so far. Most of the vegetables have been picked as they ripen. Sometimes passing motorists have honked their horns and given Friesen a “thumbs up” sign as he’s been working in the garden. A neighbour across the street has seen some homeless in the area helping themselves to the food. Non-gardening church members have also taken advantage of the garden’s bounty.

This year’s crops have included cucumbers, potatoes, radishes, peas, beans, spinach, lettuce and more. Friesen says that he might add some plants more familiar to the cultural background of those living in the neighbourhood next year. 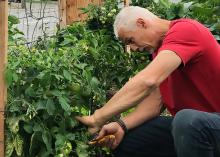 Very creative idea. Imagine free food in Canada's Garden of Eden! Two questions: Do fellow church members in your church help in the weeding, pruning, etc., or is it a one-person project? Secondly, where did Mr. Friesen practice his teaching career?

In response to Jacob Froese's question: yes, there are others in the church who do help, but the primary person responsible is Al Friesen. He taught in the Abbotsford public school system.