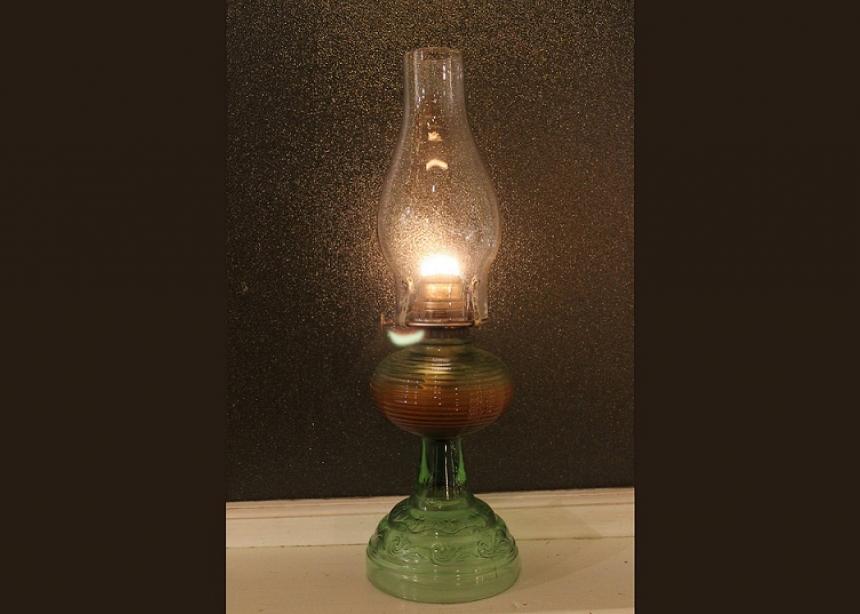 Oil lamps light the sanctuary of the little church as guests arrive to experience ‘Christmas by lamplight.’ (Photo by Donna Schulz)

Old-fashioned oil lamps graced each windowsill in the tiny sanctuary, their steady flames bathing the room in warm light as people filed into the pews. The people came to experience “Christmas by lamplight.”

The Mennonite Heritage Museum and Interpretive Centre in Rosthern hosted the event in the church that stands next to the museum on the southeast corner of the Rosthern Junior College campus.

Built in 1905, it was the first home of Rosthern Mennonite Church. When the congregation outgrew the small structure, it became home to the New Church Society of Rosthern. The building served that congregation until it disbanded in 2016 and donated it to the museum. (Read more about the church’s move to the museum grounds here.)

“Christmas by lamplight” began in 2017 with two evenings of carol singing and storytelling. This year’s event was held on Dec. 19 and 20. The invitation was open to the whole community, but since space in the little church is limited, those who wish to attend were asked to RSVP.

“Christmas by lamplight” featured two evenings of carol singing and storytelling in a historic church building at the Mennonite Heritage Museum and Interpretive Centre in Rosthern, Sask. (Video by Donna Schulz)

He says the event is a good way of getting people into the building, to see what it’s like. “We want it to be used,” he says. Since last year’s event was so well attended, the board decided to make it an annual event.

While it’s a festive event, it also acts as a small fundraiser for the museum. Funds raised will go toward replacing several windows and the church’s front door.

Although the building does have historical links to the Mennonite community, says Epp, “it’s not just another Mennonite object in town.” He adds, “With multiple faiths [in the community] we wanted the people of Rosthern to feel it was their place to visit.”

The museum board is hoping to offer a series of audio-visual presentations in the church, pertaining to the life of Mennonites in Russia. Epp says the museum would definitely consider similar presentations about other faith groups as well.

In addition, Rosthern Junior College teachers are beginning to bring their students to the church for classes related to Anabaptist and Mennonite history.

Oil lamps light the sanctuary of the little church as guests arrive to experience ‘Christmas by lamplight.’ (Photo by Donna Schulz)

Guests arriving for ‘Christmas by lamplight’ at the Mennonite Heritage Museum’s church building in Rosthern, Sask. (Photo by Donna Schulz)