Ex-offender finds new life and home in the church 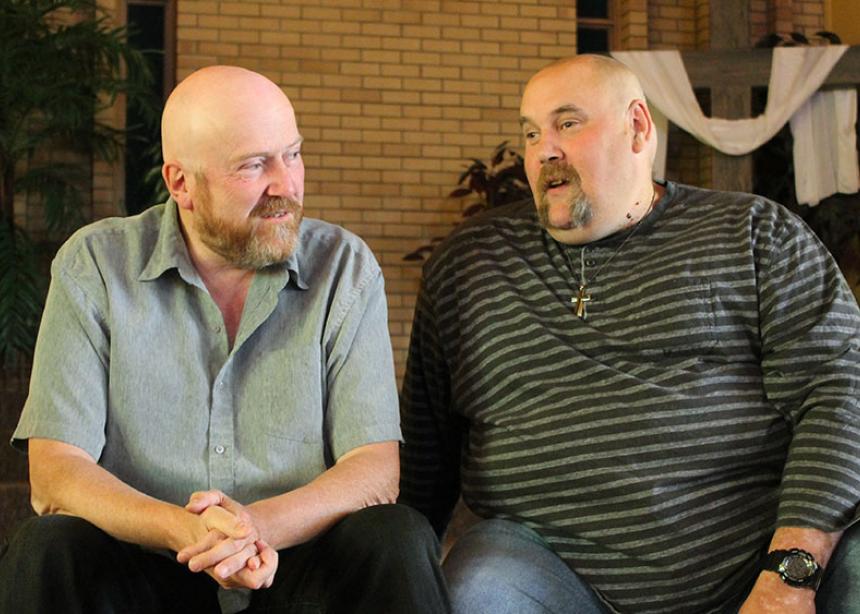 He’s the newest member of Mount Royal Mennonite Church and he loves his church. Ryan Grills started attending Mount Royal just over two years ago, when he was released from the Regional Psychiatric Centre in Saskatoon.

Grills is an ex-offender. He has served time at numerous correctional institutions throughout western Canada for a long list of violent offenses. While at Headingley Correctional Centre near Winnipeg, feeling alone and desperate, he cried out, “God, if you’re real, send someone.” It was the middle of the night. Two hours later, the prison chaplain showed up. He’d been awakened with the sense that God wanted him to talk to Grills. “We talked for about four hours,” he says, “and when we were done I prayed the sinner’s prayer. Gave my life to the Lord. And everything’s been turning around ever since.”

One step Grills took toward turning his life around was writing a letter to a church. He said he knew churches cared for people in prison, and the reply he received from Douglas Mennonite Church in Winnipeg proved him right. The pastor gave Grills’ letter to Carl DeGurse and the two began a correspondence that would grow into a lasting friendship. (Canadian Mennonite featured a story on their correspondence in the July 30, 2007 issue.

Once in Saskatoon, Grills participated in the Person 2 Person program. Eric Olfert, a member of Mount Royal, was Grills’ regular visitor, but Dave Feick, who coordinates the P2P program through the Micah Mission, and Mount Royal pastor Garth Ewert Fisher also became his good friends. Even before his release, Grills got a day pass and attended a Sunday service at Mount Royal. “I was very, very nervous because I only knew Pastor Garth and Eric and the chaplain who brought me,” Grills recalls. “You’ve got to remember, [I’d] never really been in a church before.” Feeling too self-conscious to sit with the congregation, Grills opted for the balcony. There Trevor came up to him “with this big smile on his face and says, ‘Hi, how are you doing? Glad you came,’” says Grills, and remembers thinking, “This place is kind of cool.”

Grills’ relationship with Feick and the Micah Mission continues now while he’s on parole. A couple of years ago, Feick bought him a Bible for his birthday. Grills says, “I made him a promise that I would read that Bible every single day, and I’ve kept that promise.”

Grills friendship with Ewert Fisher has also grown since his release, and there is teasing aspect to it that bespeaks deep affection. “I got an awesome pastor,” he says and, turning to Ewert Fisher, quips, “Ten bucks, please!” But then, more seriously, he adds, “I got nothing but respect for Pastor Garth, he’s been so good to me.”

And so, on May 24, Grills was baptized on confession of his faith into the Mount Royal church family. “My baptism to me means gaining community,” he says, “officially making it public, my love for Jesus Christ.” Of the baptism itself, Grills says, “When Pastor Garth and Pastor Jaime put that water on my head, I just felt like a totally different person. It was like night and day.”

The newest member of Mount Royal Mennonite is eager to work in the church. “I love the people that come to this church,” he says, “I would do anything to help them.” He dreams of working with youth, both within the church and beyond, preventing them from getting into trouble by offering them something more worthwhile. “I want them to know that God has changed my life,” he says.

Just as God has changed Grills’ life, his presence is changing Mount Royal Mennonite. “I think he’s helped broaden our definition of who a neighbour is,” says Ewert Fisher. They are learning that their neighbours may come “from a very different background than we did,” he says, and that welcome is “a mystery” that means accepting “people who walk through our doors and who are given to us as a gift.”