Everything is under the authority of Christ 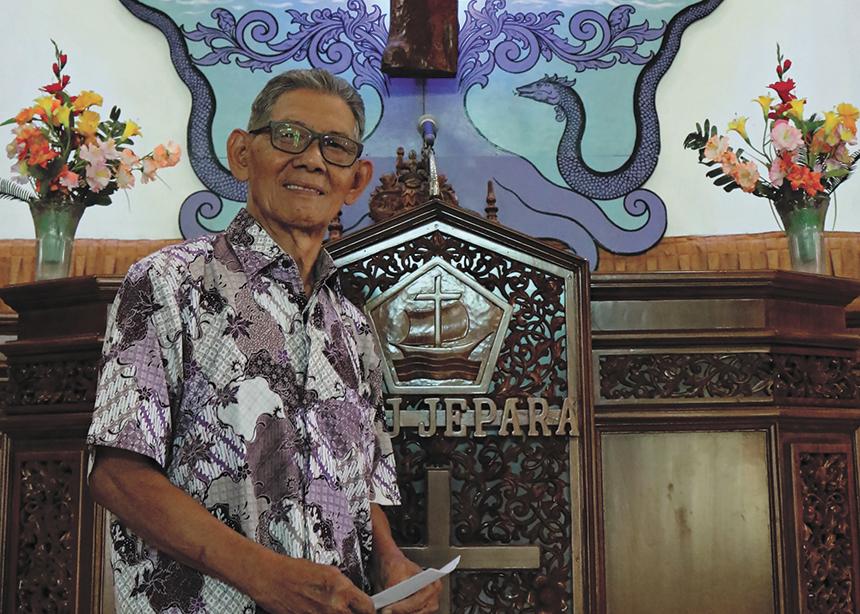 Gunungan is a figure from traditional Indonesian theatre that represents the world. The leaf-shaped art is used frequently around the country, including at the Mennonite church in seaside Jepara.

“This wood carving expresses the mission and vision of the church,” says artist Harjo Suyitno through the interpretation of Danang Kristiawan, his pastor. With the cross superimposed on top of the gunungan, the visual worship symbol represents the cosmic Christ (Colossians 1:15-23).

“Christ reconciled all creation to himself,” Suyitno says, pointing to the tiger, bull, fish, monkey and birds in his artwork. “The cross reconciles the cosmos into the family of God, who presents peace in the world. It’s a vision of the church.”

The gunungan usually has a mask in the middle representing evil and temptation. In the Jepara cross, it has been replaced with a tree, representing life, with the cross on top of it all.

“Everything is under the authority of Christ, even the bad things,” says Suyitno.

Some Christians question why he placed a snake in the drawing. It is also a symbol of wisdom, he points out, and repeats that it is underneath the cross.

Gereja Injili de Tanah Jawa (GITJ) is a Javanese MWC member church, Kristiawan says. “The good news is that Jesus loves this world. We want to picture this for our culture—Javanese people,” he says.

At the same time, many young people have become distanced from their own culture, so the Javanese artwork helps connect them, says Kristiawan. The pastors preach in a mix of the Javanese and Indonesian languages on Sunday mornings, with a smaller, more modern service in Indonesian in the evenings.

Anabaptists have often emphasized separation from the world, but “Javanese culture and Christianity have many shared values,” says Suyitno. In the church, “we accept culture, but we must modify it, cultivate it, reimagine it.”

Suyitno has changed his own culture for Christ. Born into a Muslim family, he became a Christian when he was middle-aged. A divorced father of four, he did not feel peace, but a Christian colleague urged him to pursue Jesus as his path to peace.

Suyitno is a visual, dance and music artist, who not only serves the church through showing the reconciling message of Christ through Javanese art, but he also designed the GITJ logo that incorporates the Pancasila, an Indonesian symbol.

Renewal 2027 is a 10-year series of events organized by Mennonite World Conference’s Faith and Life Commission to commemorate the 500th anniversary of the beginnings of the Anabaptist movement. “Testimony” is a series that highlights leaders in the movement, from historical figures to the present. 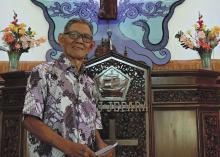 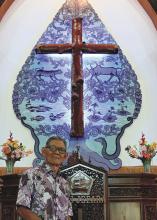 “This wood carving expresses the mission and vision of the church,” (Photo by Karla Braun)