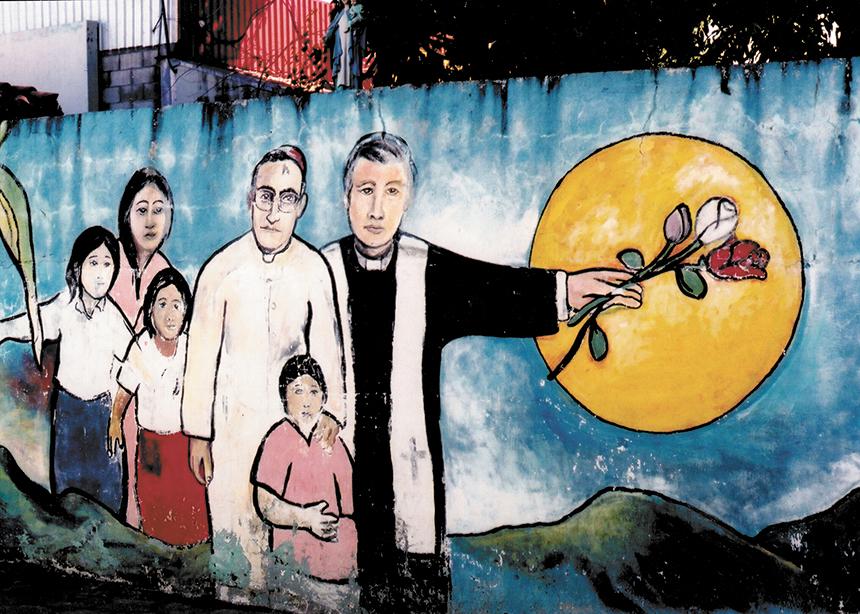 I find the Catholic process of declaring saints un-Anabaptist and weird—especially the part about verifying miracles–but the Vatican’s latest candidate for sainthood is someone who has shaped my Mennonite faith.

In February 1977, the established powers in El Salvador, a nation of death squads and deep church-state-oligarchy ties, settled on Oscar Romero as a safe choice for Archbishop of San Salvador, leader of the Catholic Church in the country. Romero was reserved, scholarly and not given to liberation theology. As the poor knew too well, he was status quo.

Until the status quo became spiritually untenable for him. Less than a month into Romero’s time as archbishop, Rutilio Grande, a priest and friend of his, was shot along with two peasants travelling with him. Grande stood with the poor who were organizing against big landholders, and the powers didn’t like it. Romero had not been particularly sympathetic to Grande’s views, but a fellow priest and two other members of his flock had been assassinated.

Grande and the two peasants are now buried between the front pew and the pulpit in the tiny church in the village of El Paisnal. In 2003, I visited the quiet church, hosted by Grande’s nephew, the priest there at the time. Beside the road outside the village, a monument to the three martyrs sits nestled in the sugar cane field.

I had been reading about Romero while backpacking through El Salvador. I doubled back, compelled by my reading, to visit sites of importance in his life.

After the death of Grande, Romero went directly to the countryside, where he conducted a funeral mass that night. He quoted Jesus: “Whatever you did to the least of these you did to me.”

There, among the grieved peasants, the simple people of his flock, began his conversion and his own path to martyrdom. He was changed not by politics or theological argument, but by the suffering poor. From that day on, he walked with the poor. He carried their pain and hopes in his heart.

He declared that the following Sunday there would be only one mass held in the whole country to commemorate Grande. The powers bristled.

At that mass, broadcast nationwide by radio, Romero said, “The one who attacks one of my priests, attacks me.” But most of the sermon was pastoral, offering words of solace, calling the church to unity and calling all to faith in “the one force that can save: Jesus who speaks to us about true liberation.”

Romero did not become a predictable leftist ranter. At the funeral mass, and later, he admonished “social movements,” stating that their efforts would be “feeble, revolutionary, passing, violent” if they did not understand the centrality of love and the need for conversion of hearts.

For the next three years, Romero preached, travelled the country and dealt with bitter tension within the church. As violence increased, each Sunday he would read the names of those killed and disappeared that week.

He addressed the elites and right-wing perpetrators of violence in a pastoral voice and with uncommon confidence: “Therefore, dear brothers and sisters, especially those of you who hate me . . . you who have hands stained with murder, with torture, with atrocity, with injustice—be converted. I love you deeply.”

He also addressed the leftist guerrillas and their sympathizers, continually calling them to renounce violence and not get lost in purely temporal goals.

He was, at once, intensely political—bringing the church into the concrete realities of history—and resolutely apolitical, refusing to align with interests vying for worldly power. “Hope is not found,” he proclaimed, “in money and power—neither on the left nor on the right.”

He confessed his weaknesses: “How timid I have felt before you,” he said to those gathered in the cathedral. He called people to prayer. He urged everyone, including mothers whose children had been disappeared, not to hate.

And he expressed and demonstrated his unbounded pastoral devotion to the poor, although he admonished them, too, for instance, not to indulge in “drink” and “bad habits.”

On March 24, 1980, an armed man silently entered the back doors of the chapel on the grounds of the San Salvador hospital where Romero lived. As Romero concluded his sermon, the assassin fired and killed the archbishop.

Only two weeks earlier, Romero had said to a reporter: “I have often been threatened with death. If they kill me, I shall arise in the Salvadoran people. . . . I offer my blood to God for the redemption and resurrection of El Salvador.”

Travelling through rural El Salvador, I saw countless murals of Romero, many accompanied by this quote: “The beloved archbishop died, but he so clearly lives on, having nurtured during his life that which no bullet can touch.” A saint indeed.

For more information and photos, see “More about Oscar Romero.” 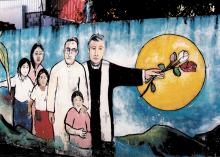