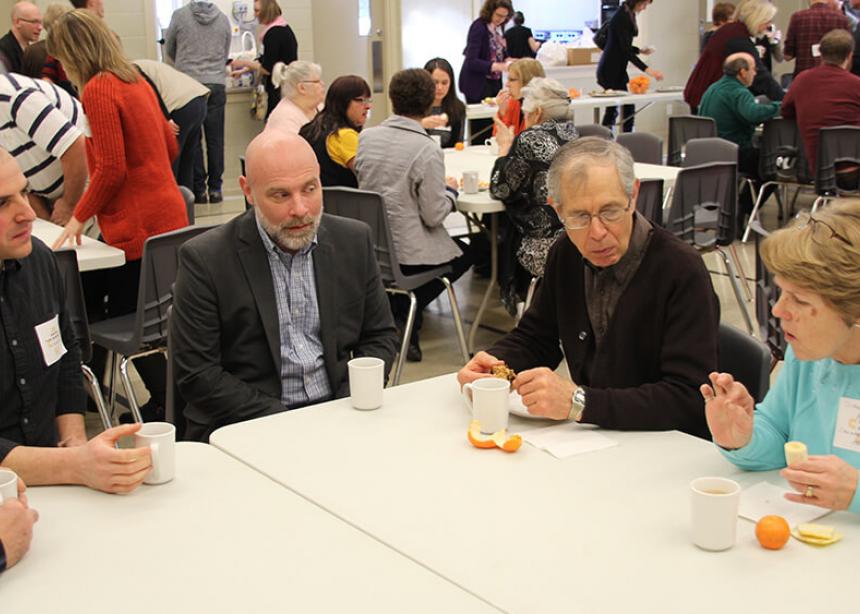 On January 22 to 23, 2016, Maple View Mennonite Church, with its pastor Brent Kipfer, sponsored the first Canadian workshop of the Evangelical Anabaptist Network (EVANA). Located west of Kitchener/Waterloo, Ont., the church is a member of Mennonite Church Eastern Canada (MCEC).

John Troyer, executive director of EVANA, emphasizes that neither he nor the network have a goal to divide Anabaptists into evangelical versus non-evangelical camps. He says no church need leave its denominational home in order to join EVANA or to utilize its tools and assistance.

Troyer was a pastor at the Clinton Frame Mennonite Church in Goshen, Ind., which removed its membership from the MC USA Indiana-Michigan Mennonite Conference in June 2014. One of the reasons the congregation left was that other local Mennonite leaders took public stances that “affirm same-sex marriage and support the LGBTQ agenda,” which “runs counter to our witness and outreach,” Troyer explained.

EVANA has seen other congregations join for similar reasons, and the Lancaster Conference, which has recently voted to leave Mennonite Church USA, is suggesting its congregations could join EVANA.

According to Troyer and Wes Furlong, director of church development for EVANA, the purpose of the network “is a ministry community of pastors and churches with a heart to see lives transformed by the Gospel of Jesus Christ” whose “common vision is to live out Jesus’ great commission to make and grow disciples.” To this end, congregations and pastors can join EVANA and receive training and assistance in missional-oriented evangelism in their home community.

Another concern of the network is to maintain a conservative interpretation and adherence to the 1995 Confession of Faith in a Mennonite Perspective.

EVANA assesses pastors like a denomination so they can operate within the legal framework for pastors in the country where the pastors serve. EVANA sees this as support for congregations and pastors, rather than trying to establish a separate denomination. With the credentialing of a leader, the expectation is that the congregation will contribution at least two to three percent of its annual budget to EVANA. Full partner congregations are expected to give five percent.

At the January event, Kipfer noted in a public statement the attendance of a number of MCEC and Mennonite Church Canada leaders, including David Martin, executive minister for MCEC and Willard Metzger, executive director of MC Canada. Kipfer expressed a deep appreciation and connectedness with the area and national churches.

In an interview with Canadian Mennonite Kipfer noted that Maple View’s leaders do not accept Recommendation #3 of Being a Faithful Church 7: “that we create space/leave room within our Body to test alternative understandings from that of the larger Body to see if they are a prophetic nudging of the Spirit of God.” That said, he is careful to note that Maple View wishes to be a “safe place for folk with same-sex attraction.”

Kipfer believes that EVANA might create a way in which Maple View and other congregations can “stay in MC Canada and MCEC with integrity.” But he is also clear that “this is not about who is in or out of the Kingdom of God,” and he does not want this to be divisive.

In sending out invitations to the event, Kipfer used the MC Canada mailing list, which is available to all pastors and congregations. This led some people to assume that the area or national churches were sponsoring the event, something MCEC disclaimed in emails to congregations on Jan. 16.

David Martin notes that while EVANA does not aim to be divisive, its presence has already been divisive in MCEC, as some congregations and pastors reacted to the workshop.

In an email interview Martin said he sees EVANA as offering missional leadership training similar to that which MCEC already offers and suggested, “If congregations are interested in joining EVANA because they want missional coaching, then MCEC invites those congregations to first explore what MCEC is already doing in this area. Further, MCEC is also concerned that a financial commitment to EVANA may place a greater strain on congregational resources.”

“Concern has also been expressed within MCEC congregations that EVANA’s presence might polarize the same-sex conversation in Mennonite Church Canada like it has in the US,” said Martin. “The Canadian approach to this conversation has leaned towards tolerance and forbearance and has been much less inclined to divide and polarize. We trust that congregations in MCEC will continue to be committed to this approach.”

Martin continued, “If a congregation chooses to articulate a particular position in same-sex conversation, then MCEC is committed to dialoguing with those congregations so that their theological understandings are understood and respected.”

The workshop was attended by 70 to 80 church members and leaders, including pastors from a number of new-Canadian congregations.

EVANA’s emphasis as a renewal movement within Anabaptism in the U.S., Canada, and beyond, is a hopeful sign for some and a frustration to others.

There are several issues where EVANA is biblical. A page accuses them of being anti- gay. Only when you are pro-God can you love everyone.

Please note that EVANA is also open for membership to individuals, regardless of the status of their own congregation’s affiliation or not. This is an important means of spiritual support and belonging in areas where there are no congregational alternatives for those individual Anabaptists who similarly still hold to the church’s official teaching. Membership in EVANA does not require leaving present formal church membership.