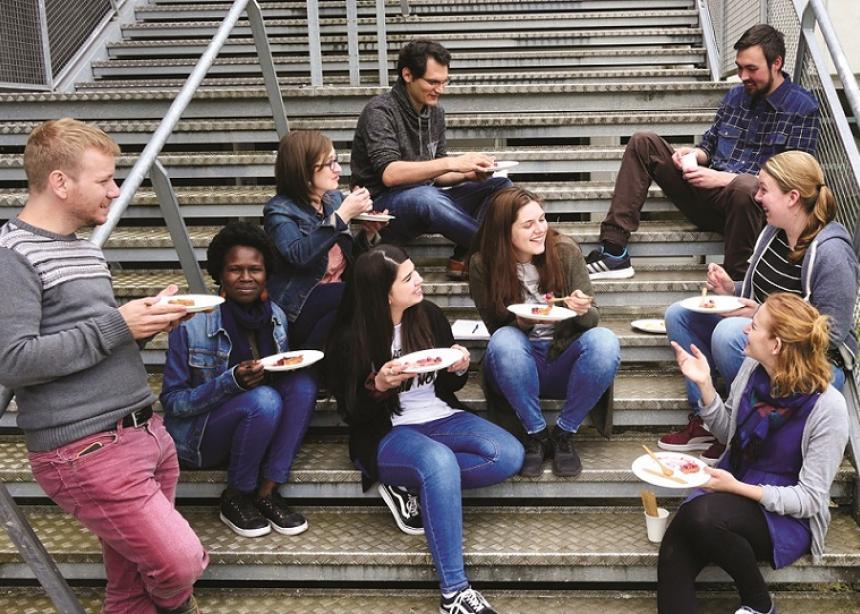 Youth program planners for the European Mennonite Conference come from nations including France, Germany, Switzerland, the Netherlands and Spain. (Photo by Max Wiedmer)

Organizers anticipate that about 1,500 Mennonites from across Europe will gather May 10 to 13, 2018, in Montbéliard, France. That total could swell to 2,500 when other visitors are welcomed to the closing Sunday morning worship service.

While previous EMCs—also known by the German acronym MERK—were organized mainly by individuals from the host country with some outside help, the 2018 conference has unprecedented teamwork. Nine church conferences are giving input, representing groups in France, the Netherlands, Switzerland, Germany, Austria, Portugal and Spain.

For the first time, one of Germany’s conferences of Anabaptists from Russia (Russlandsdeutsche, or the Bund Taufgesinnter Gemeinden), is taking part in planning.

“Previous MERKs had delegates from other countries, but this time we tried to include more youth from each country and also artists of all kinds,” said program committee chair Max Wiedmer of France. “We hope to experience unity in diversity.”

Other attendees are anticipated from Italy, the United Kingdom, Poland, Lithuania, Ukraine, Serbia and Albania.

Greater connections
The increased involvement is intentional. For the first time, each of the nine planning conferences was asked to send a representative for the general planning committee, one for a youth committee and another for an arts committee.

Elisabeth Baecher, EMC communications coordinator, said there have been more contacts between European conferences in the last few years. It’s something that has been encouraged by Mennonite World Conference regional representative for Europe Henk Stenvers, general secretary of Algemene Doopsgezinde Sociëteit in the Netherlands.

“There is a bigger sense of belonging, especially from the smaller conferences,” said Baecher, also editor of Swiss Mennonite Conference’s Perspective magazine. “This encourages the older churches.”

Stenvers said in Perspective that annual meetings of Mennonite leaders used to include only people from France, Germany, the Netherlands and Switzerland.

“The last years more and more leaders joined, and in 2017 we met in Vilnius, Lithuania, with leaders from 13 conferences from 10 different countries, four representatives of global Mennonite organizations and several mission workers,” he said. “. . . I strongly believe that the Mennonites in Europe can have a strong message of peace and compassion, without being hindered by political ties or hierarchical church structures.

“Each conference, congregation and brother and sister can do what is locally necessary and possible to make a difference for people and be a witness of faith.”

Wiedmer did his part as well. He visited the Bund Taufgesinnter Gemeinden churches—similar in some ways to Mennonite Brethren—in Germany twice to build on connections French Mennonites already have with MB Mission groups tied to North America.

“We went to isolated groups and visited with them. It’s important for them to be considered,” he said. “Henk Stenvers makes contacts also. Liberal groups are quite marginal today. What makes it easier is that apart from Germany, each country has only one conference. But in the same conference you can have a lot of different spiritualities.”

Diverse offerings
The conference seeks to reflect that diversity. A worship team has formed with members from across the continent. A mass choir, estimated to number 200, is already rehearsing in regional clusters.

Youth will have roles in plenary sessions but will have their own program.

Also scheduled are testimonies from across Europe on experiences in missions, social work, peace and education, as well as eight sermons.

On May 10, a new theater production, Far From Home, will use 100 actors and musicians from all over Europe. Beginning in 30 BCE in Palestine, the program will address Mennonites’ migrant past, continuing into 16th-century Switzerland and other European countries, culminating in a welcome of refugees today.

“There is still a secret about that,” Baecher said. “The director, Max, doesn’t want to say more.”

A historical colloquium open to the public will include exhibits from historical societies, including quilts from the Second World War and contemporary comforter work for refugees, and the Russian Mennonite museum in Detmold, Germany.

“There might be some tensions between more liberal and more evangelical Mennonites, but I am guessing rather less than in the past,” Wiedmer said.

Youth program planners for the European Mennonite Conference come from nations including France, Germany, Switzerland, the Netherlands and Spain. (Photo by Max Wiedmer)