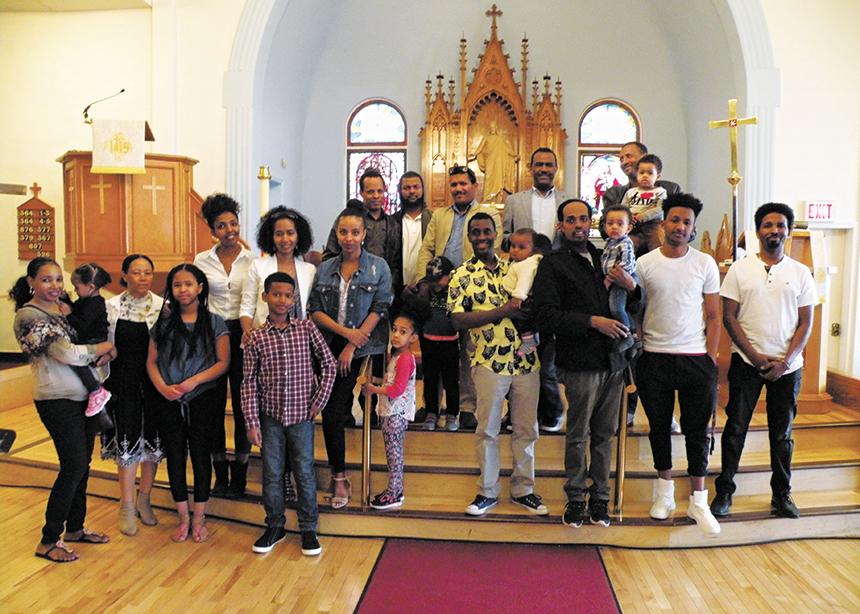 Bethel International Church Edmonton Oromo Congregation families are pictured at the front of Trinity Evangelical Lutheran Church in Edmonton, where they meet for services. (Photo by Joanne De Jong)

Born in Ethiopia, Tucho has planted more than 50 Oromo churches throughout Ethiopia and has travelled in Kenya, the United States, Canada and Australia, preaching the gospel. His passion is for his people from the Oromo tribe, who number more than 34 million worldwide, with 3,000 living in the city of Edmonton, where he planted Bethel International in 2016.

After pastoring a church in Toronto for seven years, he felt God calling him to Edmonton. “God gave me a vision to plant a church in Edmonton . . . in June 2014,” he says, “and for two years I prayed on it. Finally, I decided and came to Edmonton Feb. 26, 2016.”

After three years, the church now has between 40 and 45 members, with around 30 attending on a Sunday. This is the first time Tucho has not taken a salary. He works as a security guard four nights a week doing 12-hour shifts. He shares how it was a personal challenge not getting enough sleep: “Although it is a struggle, I enjoy the opportunity to study and prepare my sermons without interruption.”

He says that he is able to accomplish a work-life balance because of his model of ministry, which involves training a pastor within the congregation to eventually take over, and to appoint leaders who are responsible for specific ministry tasks. Bethel International has five main leaders: a prayer team leader; a women’s ministry leader; a worship leader; a youth leader; and a Bible study and preaching leader, which is currently being filled by Tucho. Each leader is trusted to lead and to bring problems to the team for discussion when they have their monthly meetings.

Bethel International officially became a member of Mennonite Church Alberta in 2018. The reason why it became a Mennonite church, Tucho says, is because, “[i]n Ethiopia I worked with the Full Gospel Church, and we saw the Mennonites [Meserete Kristos] as part of our family. When we began the church in Edmonton, some of our members were Mennonites from Ethiopia. When I see Mennonites, I think ‘biblically based,’ and that’s what we wanted to be.”

Tucho says that one challenge the congregation faces is the commitment to holiness. Some people want to belong to the church for ethnic reasons, but the leadership is interested in producing disciples who are serious about following Christ.

“The gospel is not about quantity but about quality,” he says. “If the gospel doesn’t change the people, what is the point? I’ve seen the gospel change the personal life. We can’t compromise to have numbers. How we speak, how we react in the world, is our witness.”

A final challenge to the congregation regards its youth. The next generation of young people will not speak the Oromo language fluently, Tucho notes, so they need to look ahead to having an English pastor.

He says that one of things he loves about this congregations is that “they love to learn the Word of God. They have an appetite. They ask me to learn more, and this gives me joy.”

Bethel International meets Sunday afternoons at Trinity Evangelical Lutheran Church in Edmonton. Once a month, the congregation has a fasting and prayer service followed by a Bible study. During the prayer time people focus on the big dreams: 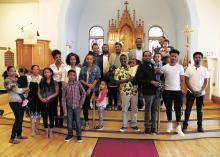 Bethel International Church Edmonton Oromo Congregation families are pictured at the front of Trinity Evangelical Lutheran Church in Edmonton, where they meet for services. (Photo by Joanne De Jong) 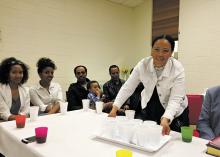 The last Sunday of each month for the Bethel International Church Edmonton Oromo Congregation is a fast and prayer time followed by a Bible study. The fast is broken with a barley drink and coffee. Serving the drinks is Ebissie Besso, the wife of Pastor Mezgebu A. Tucho. (Photo by Joanne De Jong) 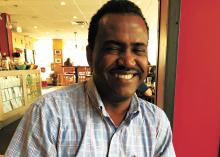 Pastor Mezgebu A. Tucho says that one of the things he loves about this congregations is that ‘they love to learn the Word of God. They have an appetite. They ask me to learn more, and this gives me joy.’ (Photo by Joanne De Jong)