‘What choice did I have?’ 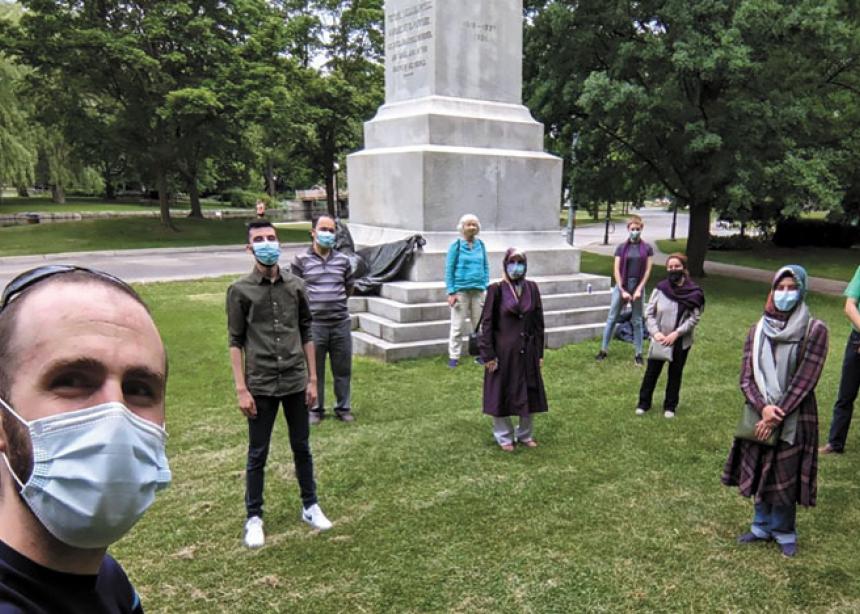 It has happened more than once. Someone approaches social entrepreneur Leon Kehl with the name of a highly qualified person who needs help getting a start in Canada. Kehl has learned these nudges often have “God’s fingerprint all over them,” so he takes a “leap of faith” and hires the person. “People come into my life. . . . How do you not see God in that?'' he asks. “What choice did I have?”

This is just one way that faith impacts Kehl and Boxbrite Technologies, the tech start-up business he founded. Of the 20 people he employs, 11 were refugees and several others are skilled immigrants. Kehl believes their diversity makes them a better workforce. “Homogeneity limits us,” he says.

Boxbrite develops the technology to automate the process of monitoring solar power systems remotely, using software to detect malfunctions much more efficiently than individuals onsite could do.

Kehl is intentional about hiring newcomers to Canada. In the aftermath of the 9/11 attacks in 2001, he realized the importance of people from different backgrounds getting to know one another, so he visited Israel, Palestine and Turkey, and participated in Muslim-Mennonite dialogues. He worked with his congregation, Floradale Mennonite Church, to sponsor refugees stranded in Syria, and with other groups in the community to sponsor additional families. By the time he started Boxbrite he had already helped five newcomers get established in Canada, and he wanted to keep helping others as part of living out his Mennonite faith.

He employs people from countries and faith traditions who might ordinarily see each other as enemies. “Bringing people together like that,” he says, “how do you not see God in that?”

Recently, Boxbrite employees attended a rally against Islamophobia in Kitchener, Ont., after a Muslim family in London, Ont., was run down with a vehicle in an incident being treated as a hate crime. Kehl describes attending that rally together as a real “God moment.”

The team also has virtual coffee and tea breaks, and they meet outdoors occasionally for a hike or a picnic as ways of staying connected.

Kehl also sees entrepreneurial work in the alternative energy sector as a way to put faith into action. He says people need to “transfer to green energy” because they “cannot keep going” the way things are.

But just because the solar industry is “green” does not make all of its players good. Companies that install panels do not always provide customers with information on potential faults or failures, or on how to monitor a system to ensure it is working properly. Boxbrite wants to ensure that solar panels and inverters work efficiently for decades.

In a recent article about his business venture in Marketplace, the publication of Mennonite Economic Development Associates, Kehl sited an example from South Africa where, out of six village solar panel projects funded by European agencies, none of the systems were working after five years. In one village the disconnected solar panels were being used as roofing for a latrine.

Kehl says Boxbrite can offer cost-effective monitoring that would avoid such failures. He sees this as “necessary work” that is “no different than feeding people.” As someone who began computer programming as a teen, he likes to use software to solve problems.

Kehl only recently started to embrace the label “businessman,” avoiding it for years because of negative stereotypes that link business people with the love of money, something Jesus critiqued often. Over and over again, Kehl finds himself wrestling with God, only to find himself, like a reluctant Moses after his burning bush experience, stepping out in faith.

“I didn’t choose this path,” Kehl says. “I can’t make my business succeed. I can only be faithful.” It has taken him a couple of years of wrestling with God to be able to say he is a “Mennonite called into business.”

Several books that came into his life at the right time shaped how he approaches business. Titles like Why Business Matters to God, The Soul of an Entrepreneur: Work and Life Beyond the Startup Myth and Good Work helped him understand the purpose of business from a faith perspective, and the importance of creating meaningful work opportunities for people. Many humble Mennonite business leaders have also inspired him.

Kehl has two master’s degrees, in business administration and spiritual direction. He finds himself “taking the tools [he] learned as a spiritual director and applying them in a business context.”

Listening to the stories of those he employs has led to many powerful conversations about faith, he says, allowing him to see a broader view of God. Being attentive to God’s leading also helps him turn over control to God. “I couldn’t do it without a faith orientation . . . because I would assume it is up to me,” he says. “Control and faith are mutually exclusive.”