Henry Paetkau retires after lifelong service to the church 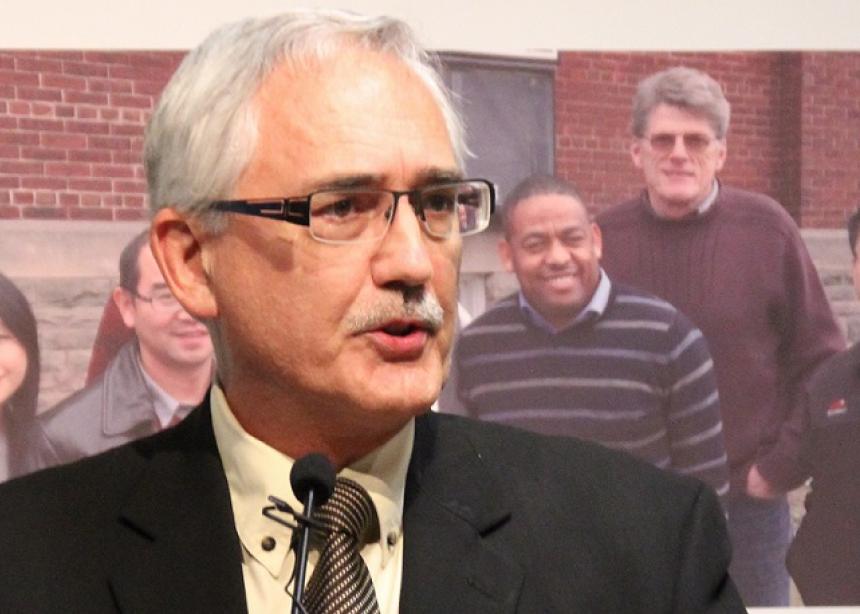 May 3, 2018, was Henry Paetkau’s last day in the Mennonite Church Eastern Canada office, but he wasn’t quite done yet. On June 5, he delivered the final address of the Ralph and Eileen Lebold Endowment for Leadership Training fundraising dinner at Conrad Grebel University College in Waterloo. (See more about the Lebold fundraising dinner at “End of an era.”)

Paetkau ended his career in the church as regional church minister, but his work in many ways goes back to 1970, when he left southern Ontario to study at Canadian Mennonite Bible College in Winnipeg (now Canadian Mennonite University).

In his comments on June 5, he noted that, like many others from the baby boom generation, he wanted things to change, including the church. Quoting New York Times columnist Ross Douthat, Paetkau said, “Boomers were the last generation to come of age with some traditional edifices still standing, the old . . . norms and Christian(ish) [sic] religion . . . which gave them something powerful to wrestle with, to rework and react against and attempt to overthrow.”

He went to Bible college in Winnipeg to begin an academic career, one which came to fruition in 2003, when he became Grebel’s president, a position he held for eight years. Before that, he served as the pastor of Windsor Mennonite Fellowship, Harrow Mennonite Church and Grace Mennonite Church in St. Catharines, Ont., and as the conference minister for Mennonite Church Canada—45 years of service in total.

In his Lebold address, entitled “What’s past is prologue,” he noted that many wonder if the church has any future, since the boomers were very effective at tearing down institutions.

“Ironically, in many ways the boomer rebellion eventually succeeded, and now we aging boomers are wondering what happened to the programs and institutions which formed us, we became involved in and supported,” he said. “Now we are anxious about what will become of the church in an age of post-institutionalism and post-denominationalism, indeed, post-Christendom.”

But instead of depression and worry, he expressed hope in the future, a Christian resurrection hope that is already being realized. He pointed at four significant developments:

In a fifth category, he grouped three more changes:

Paetkau highlighted that, while the church has been good at calling and equipping pastors and teachers, it is time to focus on the other three gifts from Ephesians: apostles, prophets and evangelists.

In closing, he challenged the church as it goes forward to remember that it is the vehicle for the good news to be spread to the world. This is the “hope, promise and opportunity of the church,” he said.

Celebrations around Paetkau’s retirement included a book of stories, memories and words organized by his daughters Heidi, Shari, Angie and Becky, and a celebration of his ministry held at 50 Kent Ave. in Kitchener on May 15.

Blessings of peace, hope, laughter, good health and joy in your retirement. Wishing you plenty of time for family, visitation, travel, (if you still enjoy it), and pursuit of new passions, hobbies, or whatever other calling you may sense from within/without.

If ever you’re in our area, please DO plan to stop in.