The end of an era at MHC Gallery 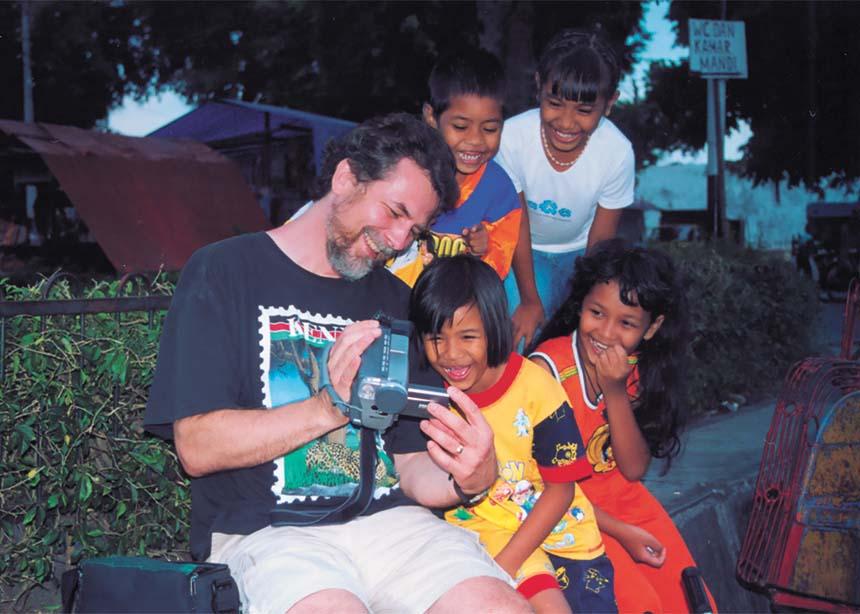 Ray Dirks travelled to Yogyakarta, Indonesia in 2001 to hear stories from Mennonite families and meet artists for his book, In God’s Image: A Global Anabaptist Family. (Photo courtesy of Ray Dirks)

The founder and curator of the Mennonite Heritage Centre (MHC) Gallery, Ray Dirks, retired after 23 years of leadership. His career at the gallery, which ended on July 31, has included producing four books and countless exhibits, receiving multiple awards and building dozens of relationships with artists and visitors.

Dirks established the MHC Gallery in 1998. He previously curated exhibits of contemporary African art for development education with non-governmental organizations, working in 15 countries. When Dirks moved back to Winnipeg, he wanted to use his experience to create a new kind of gallery. He proposed the idea to Ken Reddig, the director of the Mennonite Heritage Archives, as there was empty space in the building.

“I wanted it to be a place where Mennonite artists can feel appreciated and feel at home,” Dirks says. “Perhaps you didn’t feel valued in the past but here is an institution of the church that says you are.”

The Mennonite church supports people who can preach, write, sing and play instruments, so “why not the gift of being able to create visually?” he asks. “They can introduce new or different ways to worship than what we’re used to.”

With Dirks’ proposal in hand, Reddig approached Mennonite Church Canada, which approved the plan—as long as Dirks raised one hundred percent of the funds. He started completely from scratch, with no contacts, money or exhibits. While the gallery got a few vital contributions at the start, fundraising was difficult.

“In those first few years I remember there were many times that I was planning up to two years in advance, knowing we had a month or two of money,” he says. He asked to have his pay cut to part-time and crossed his fingers.

It was Dirks’ book, In God’s Image: A Global Anabaptist Family, and the support of John Wieler, who helped coordinate the financing and distribution of the book, that got the gallery on a stable foundation. The book tells stories from the lives of Anabaptists around the world through photos, art and text. Getting to know and spend time in-person with other members of the global Anabaptist family was a huge highlight of Dirks’ run at the gallery.

To his surprise, they sold enough books to secure some financial cushion. The loyal and generous donors that have since followed, who Dirks considers not only supporters but friends, have kept the gallery alive.

“For me, a lot of the most humbling highlights were the relationships that I had with individuals . . . and I think it happened because this place was, and is, unique.” Those connections continued, even when the gallery went through changes and ownership passed from MC Canada to Canadian Mennonite University.

The gallery became a place for not only Mennonites to display their art, but also for people of other religions and backgrounds. “I wanted it to be a place that was open to the diversity that is now in Canada and always increasing. I wanted it to be a place where you could say to artists from other cultures and other faiths: so long as you are a person of goodwill, here’s a place that you can consider to be like a home . . . we want to learn from you and we want you to learn from us,” says Dirks.

Art has the power to bring people together. For Dirks, it led to working with Muslim artist Isam Aboud and Hindu artist Manju Lodha. In 2009, they created In the Spirit of Humanity, a project focusing on cultural diversity in Manitoba. Travelling to schools and EAL centres, they taught art workshops to thousands of students, helping them express who they are. That project ended in a book and more than 500 pieces created by students in the gallery.

Lodha and Dirks have done further work together focusing on the diversity of faith and spirituality in the province, for which they were jointly awarded the Lieutenant Governor’s Award for the Advancement of Interreligious Understanding in 2018. They have created a documentary, led workshops and are currently working on their final phase of the Leap in Faith project, a book exploring faith diversity through the eyes of ordinary people in Manitoba. It will be available in 2022—Dirks’ first task for retirement is to finish it.

Dirks is looking forward to more projects in retirement, such as compiling his journals from his years working in Africa and creating a series of paintings for a Mennonite museum. The MHC Gallery is celebrating and honouring Dirks at its annual fundraiser taking place on Nov. 12. His books are available for purchase at CommonWord bookstore. 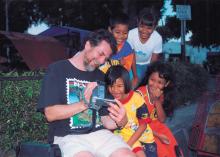 Ray Dirks travelled to Yogyakarta, Indonesia in 2001 to hear stories from Mennonite families and meet artists for his book, In God’s Image: A Global Anabaptist Family. (Photo courtesy of Ray Dirks) 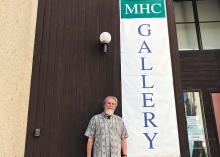