Encounters with the church in Cuba 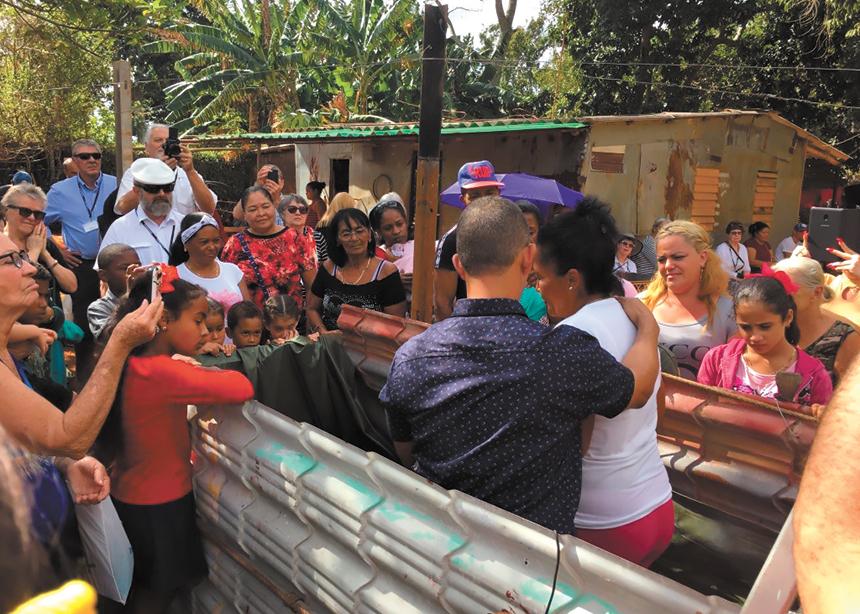 Sixteen Anabaptist Christians from Canada and the United States came to Cuba from Jan. 12 to 16 to learn about the church there. I was one of them.

Jack and Irene Suderman of First Mennonite Church in Kitchener, Ont., organized our travel experience through TourMagination. Longtime students of Cuban history, economics, culture and politics, the Sudermans are friends of the Cuban church as well as teachers in Anabaptist leadership for the Brethren in Christ (BIC) Church.

We on the tour recognized daily the distinctive and unique experiences we were having in Cuba because of their many previous trips and contacts, friendships, formal relationships, and the respect they have gained from the Cuban people, fostered over the past decades.

We rouse ourselves early to leave our Havana hotel and drive 30 minutes to the little village of El Cafetal to worship with a year-old BIC house church; we are accompanied on our bus by the BIC bishop and executive secretary.

We can hear the energetic singing of some 40 to 50 congregants, half of them children, as we arrive. They clear out of the already crowded space to make room for us and then cram back in to the back of the long narrow room.

Half the house is inhabited, the other half given over for church. The BIC model for evangelism is: Grow the church in a house until a thriving congregation needs to search for a church building. This group is beginning to look for a place after only a year.

Singing is at the heart of the service. Led by a praise team, the pastor’s guitar and a tambourine, all of the songs are known to everyone in attendance, including small children.

Jack interprets the sermon delivered by the young pastor who, with his wife and three children, live in a neighbouring town and come to minister on Tuesday, Thursday and Saturday evenings, and on Sunday, conducting Bible studies, worship services and lay leadership training.

His simple and direct message is from John 14: “Love God and your neighbour.” Such a command is not so easy to do in this town, we learn, where there is violence over religious faith and for other reasons.

The pastor has been stabbed. He asks us to pray for the lessening of violence and for the growth of the church’s witness.

We are all grateful for the chance to walk into the village to another home for the baptism and after-service meal. The baptismal service has been created just for this occasion, tin roofing having been removed from one of the congregant’s homes and stood on end to create a kind of deep horse tank. The 1.5-metre deep tank is entered via a common metal step ladder.

We are witnesses as the first baptismal candidate, an older woman who uses crutches, is helped up the ladder and over the edge and into the water. She looks solemn as the bishop lowers her down into the water and then joyful as the pastor pulls her up from the water, saying ven, (“come” in English).

The young pastor says this to each of the six baptismal candidates, offering his hand: “Come into this Christian fellowship.” The candidates all keenly want this immersion into Christian community.

More than one of us observers wipes a tear. Of course, we are moved. Fellow Christians from the U.S. and Canada also long for baptisms, to witness new life, to see the people “come.”

After the baptism, we enjoy a sumptuous special meal prepared for us at great cost, given the poverty of the average Cuban household. We sit where we can: on available chairs and on a concrete building foundation in the yard where the children sit. We use the Spanish we know to talk with the children; we use sign language and smiles and hugs and cameras.

Our farewell embraces feel real; we are friends. Such is the enveloping kindness, warmth and acceptance of the Cuban people, even toward some of us who are Americans, whose government has made their lives hard.

Multiple forms of the Cuban church

At the heart of our visit is a series of encounters with the Christian church of Cuba.

Although everyone on our tour is Mennonite or Mennonite-connected, we spend most of our time with the BIC church, for an important reason. When Fidel Castro’s Revolution succeeded in 1959, the BIC was registered, while the Mennonite church was not. Registered churches had advantages: land was allocated for church buildings, religious visas for visiting teachers and preachers were granted, and they had the right to import religious materials.

On what is Martin Luther King Day in the U.S., we visit the Martin Luther King (MLK) Center in Havana. The pastor of Ebenezer Baptist Church, Amos Lopez, talks to us about violence in Cuba’s history and the church’s mission to promote peace. He openly discusses the role of the government in Cuba, the validity of cooperation with the government in its social role, and love of homeland versus the prophetic message of Christianity.

We feel lucky to meet Raul Suarez, now in his 80s, who is the founder of the MLK Center and a well-known Protestant leader in Cuba described as having “a mission to ‘Anabaptize’ Cuba.” He believed that the Anabaptist faith was missing in denominational Cuba and he sought to emphasize nonviolence, women in leadership, and opposition to capital punishment. He became the first “evangelical” in the Cuban Assembly.

Described as a kind of Billy Graham figure to Fidel Castro, Suarez served as an influencer on the Cuban revolutionary leader. His message to us: “The church’s temptation is to live for itself. Its mission is to confront the world with Jesus Christ. We need restoration and re-imagining of the roots of Christianity in our theological, biblical and liturgical practices. Christianity must evolve: for example, the church must recognize the wrongs of poverty.”

That same afternoon we meet with another amazing charismatic leader, Joel Ortega Dopico, executive secretary of the Cuban Council of Churches (CCC), a Presbyterian pastor with whom we have an amazing Q&A session. He tells us of the CCC’s sponsorship of a thousand volunteers showing Jesus through the unity of the church.

Offering background on the history of the church in revolutionary Cuba, he also reflects on why the Cuban church is growing today:

Because he knows we are Mennonites, Pastor Joel ends with a dramatic story. What is known as the Special Period—1989 to 1994—after the Soviet Union fell apart and discontinued its $4 billion of support for Cuba, was a devastating time for the Cuban economy. People were literally starving in Cuba, he says. But Mennonite Central Committee (MCC) sent canned meat for pregnant women, to provide protein needed for the development of the babies they were carrying, which was distributed through the CCC.

Later, when John Lapp, the head of MCC during this time, came to visit Cuba—on a tour like we were experiencing—a young man who was one of those babies saved by the meat his mother received, came forward to thank Lapp, recognizing him from his picture, Pastor Joel tells us.

Our next gathering is with BIC presbyters at the BIC Training Center in Palmira, where Jack and Irene teach Anabaptist leadership courses. The presbyters are candid about their needs and wants: their desire to grow in 2020 from 100 churches to 150.

They discuss their very active prison ministries, noting that Cuba is second in the world, after the U.S., in per capita imprisonment. They testify to the fact that Cuban prisoners have become ministers in their church and they introduce one of them to us during our visit. More than 700 baptized members in prisons meet together in cell groups three times a week, we are told.

When asked about the unique contributions of the BIC Church in Cuba, they say that they preach peace, nonviolence, the importance of family life, pacifism and reconciliation. They are humble, readily admitting that peacemaking is a slow process.

Finally, the most visibly prosperous church institution we visit in Cuba is the Christian Center for Reflection and Dialogue, in Cardenas. Begun by a veteran of the Revolution, Raimundo Garcia, the Center is run today by his daughter Rita, who meets with us.

She personifies the strongest woman in leadership we see during our time in Cuba. Convincingly honest about the failures of the Cuban government and her own protests in Cuban politics, she argues for the human rights guaranteed by the Cuban Constitution. She laments the lack of opportunity for Cubans to thrive in the current system, and the departure from their homeland of the young, including her own child, who will leave Cuba for anywhere else in the world for a better life.

The Center tries to provide models and experiments that the Cuban people can imitate to improve their lives. These include fostering women’s rights, family well-being, counselling for domestic abuse victims, agriculture, care for the elderly, water purification, simple organic farming and bio-gas production.

The Center receives global support and is clearly well managed. Theirs is the most direct voice we hear in Cuba on issues of human rights and the use of the Cuban Constitution.

During our stay, Jack emphasized again and again as we sought to understand Cuba, that the Revolution has been a “living experiment” for the past 60 years. All of us marvel at the resourcefulness of the Cuban people as they have lived out the experiment through its successes and failures.

We all agree that our time in Cuba was not just a life-changing learning experience, but also a powerful and moving emotional experience, people to people.

One of our group cited Luke 24:32 to sum up our time in Cuba: “Were not our hearts burning within us?”

Raylene Hinz-Penner is a retired English professor and writer (Bethel College and Washburn University, both in Kansas). She is a member of Southern Hills Mennonite Church in Topeka, Kan. Excerpted from “Freedom in Christ” in the Feb. 24 issue of Mennonite World Review.

1. What experiences have you had with Cuban people? What is the historic attitude of Canadians toward Cuba? How did the collapse of the Soviet Union affect Cuba? How have Canadian-Cuban relations been different from U.S.-Cuban relations?

2. After describing an outdoor baptism in Cuba, Raylene Hinz-Penner writes that the Cuban baptismal candidates “all keenly want this immersion into Christian community.” Why do you think these candidates are so keen for baptism? How is the worship experience she describes different from a typical worship service in your congregation?

3. Hinz-Penner says that in Cuba, “church growth is the work of the Holy Spirit.” What do you understand this to mean? Why do you think it is important that the church “has a Cuban identity, not an imported one”?

4. Hinz-Penner writes that Joel Ortega Dopico believes that Cubans are “inherently religious people by background and history.” What factors might make Cubans inclined to be religous?

5. Where do you find hope in this story? What can the church in Canada learn from Christians in Cuba? 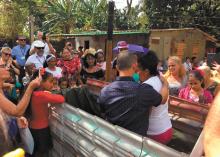 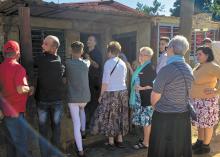 Irene Suderman, centre with the blue scarf, a co-leader of the learning tour with her husband Jack, is pictured with tour members at a Brethren in Christ house church in Cuba. (Photo by Jack Suderman)