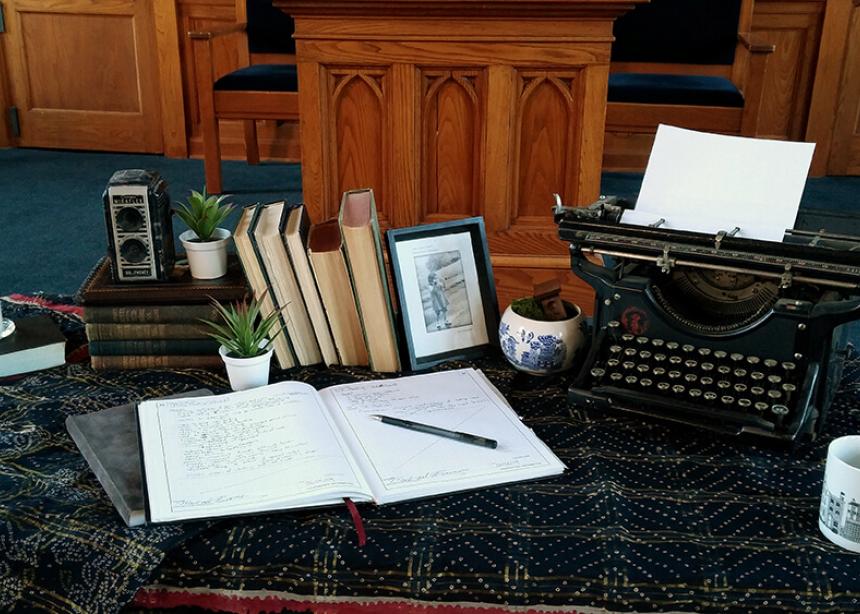 Lent is a time that commemorates the 40 days Jesus spent in solitude, silence and fasting in the wilderness. During this time in the wilderness, Jesus was tested and confronted with his own human vulnerabilities. Through Lent, we are invited into that same space of intentionality, to seek Jesus in the silence, coming to terms with our own vulnerabilities. It is not really all that much fun.

It’s intentionally bleak with the promise of hope in the resurrection at Easter. At the very least, however, the journey of Lent is a practice in encountering the resurrected God. Without Lent and coming to face our vulnerabilities, we are left with a hollow resurrection. What we learn in Scripture is that when you encounter Jesus with your vulnerabilities, you will be resurrected, transformed and made whole. It’s like Jesus was the “bringer of shalom.”

It is by no mistake that those who receive transformative healing from Jesus are those who are the most vulnerable and have nothing to lose, for the painful realities of life have already done that to them. As in many societies, including North America, first-century Palestine had its power structure that marginalized poor and vulnerable populations, and religious and socio-economic elitism saturated that world.

One of the beautiful ways people encountered Jesus in a way that subverted this perverted power structure was through meals. Jesus ate with all sorts of people: tax collectors, prostitutes and other “have nots.” Sitting at a table was a beautiful sign of solidarity, as everyone was on the same level. No one was higher than the other, and all shared food and drink together.

He also hung around lepers, and healed them and other sick and “unclean untouchables.” The thing is, he made physical contact with the untouchables without fear or reservation in a “bringer-of-shalom” kind of way. The cast-offs were made whole and were given the integrity of relationship, and thus they became a threat to the oppressive structure of first-century Palestine. Shalom subverts empire.

While it was a stunning social movement in that particular place and time, it has more substance than that. The “social gospel” falls flat when we refuse to acknowledge our own vulnerabilities, for it is in our vulnerabilities that we encounter Jesus.

A stunning encounter with the resurrected Jesus

John 20:1-18 gives us a stunning encounter between Mary Magdalene and the resurrected Jesus. Women in first-century Palestine were on the bottom of the social ladder. Even in the other gospels, woman are visible, but do not carry a significant part of the vocal narrative. But in John, that is not the case. Women have a voice and are integral to the overall story. It is a subversive event when a woman, in this case Mary, is integral to a story.

Mary travels to the tomb for no other reason than love. She simply and brilliantly loves Jesus. In Luke 8:2, we learn that Mary was delivered from seven demons. She met Jesus as someone who was in dire need, and completely vulnerable to the control of demons. In the Gospel of John, we meet Mary Magdalene in 19:25, where she is named as one of the women who stood near the cross.

After the disciples leave, Mary stands outside the tomb weeping over the missing body of the Jesus. As she looks inside, she sees two angels in white. One inquires, “Woman, why do you weep?” Mary responds in distress over her master’s body being taken. The moment she turns her head, she sees Jesus but does not know it is him. It seems she does not expect the resurrection. Mary asks what she can only tell to be a gardener if he took the body somewhere.

The gardener speaks again, but simply says her name, “Mary.” She turns to face him and recognizes him as “teacher.” Jesus then asks her to proclaim this to the other disciples and she goes to tell them what she has just seen and heard. The movement of what Mary goes through is quite telling to the relationship she had with her master and defined her encounter. She weeps.

Emotions have a deep sense of truth-telling about them. They expose a core element of the human experience. Mary is devastated that her master has died in the most brutal of ways. She is also devastated that he had been taken from the tomb.

She recognizes Jesus after first mistaking him for a gardener. She didn’t know he was to be resurrected. Yet here he is, and she has the gumption to recognize who he was before her.

What a Christian call!

In Mary’s excitement, Jesus calls her to proclaim what she had seen to the other disciples. This is significant, as she is the first apostle to tell of the Easter resurrection event.

Love is a vulnerable thing. Mary loved Jesus. All she did was love. It was love that enabled her to encounter Jesus in a number of ways. She touched, saw and heard Jesus. Of course, this shouldn’t be a surprise, as this was Jesus being subversive, pointing to a just, divine kingdom reality that a woman should announce his resurrection. We should be inspired. Let’s be like Mary! If we take this seriously, we are to be vulnerable, love the vulnerable, be loved and be transformed. What a Christian call that is! Yet we still marginalize and prey on the vulnerable.

In September 2013, I attended the Truth and Reconciliation Commission (TRC) in Vancouver. The TRC is a national truth-telling commission speaking to the terrible realities of Canada’s Indian Residential Schools. The commission travelled to many Canadian cities with the hope that truth-telling will begin a journey to reconciliation with its oppressors. It is there I came face to face with vulnerability in its ugliest, rawest form.

I walked into a sharing circle where Indian Residential School survivors were sharing their stories. I sat on the periphery, seemingly lost in the large number of chairs for people to listen. The testimonials were brutal. Anyone with any sliver of empathy would be heartbroken. One man took the microphone and sat with it for a few moments, not saying a word. After a while, I heard faint sounds of a man weeping. Then after a time he wailed into the mic and said that he was raped when he was 6. I have never heard a grown man cry in such a way. It was as if it echoed through eternity, sounding of a tortured soul.

The indigenous population in Canada has been significantly marginalized. Our neighbours have significantly higher incarceration rates, poor living conditions and tremendous trauma from a history of being told to live a certain way. A lack of empathy, no desire for solidarity, brutal proselytizing that reeks of colonialism, and a continued “buy-in” to the archaic stereotypes, all contribute to our indigenous neighbours being continually marginalized and vulnerable to the point of death. This “buy-in” crafts before us a people who are villains, so much so that they cannot be seen as human.

The moment we pick on the vulnerable, we are nailing Jesus to the cross ourselves. Jesus himself was vulnerable. He encountered the vulnerable and was persecuted for it. Remember, though, that Jesus’ encounters with them made them whole and thus subverted the empire of first-century Palestine.

Lent has the power to transform us

This is what Lent does. It crafts a vulnerability that, through Christ, redeems this world. Jesus, the “bringer of shalom,” crafts us into a people who are vulnerable, acknowledging our brokenness, which is common to all humanity. God in the flesh, in full vulnerability, was killed on the cross by those who did not acknowledge their common humanity and attempted to hold power over those who are “lesser.”

To encounter the vulnerable Jesus is to be vulnerable ourselves. If we take the Lenten path of peeling away our vulnerabilities and fully embrace the resurrection, we will indeed meet Jesus, learn to love, and be “bringers of shalom” and love. This is the kind of spirituality that shakes us to our core. It has the potential to change the way we look at the world and the people within it. May we be a people who embrace our vulnerabilities for the sake of being transformed by Jesus and thus empowered to be a people who fully love our neighbours.

Chris Lenshyn is associate pastor at Emmanuel Mennonite Church in Abbotsford, B.C. He lives with his wife and two boys in Mission.

See a Lenten biblical reflection: “For what purpose has Christ grabbed hold of you?”

1. What situations or circumstances make you feel vulnerable? What is it about vulnerability that we dislike? Can you think of someone who graciously lives with vulnerability? What can we learn from that person? What does it mean to “embrace our vulnerabilities”?

2. Chris Lenshyn writes, “[I]t is in our vulnerabilities that we encounter Jesus.” Why might we be less apt to encounter Jesus when we feel strong and capable? Does that mean that the poor and the weak have a deeper faith?

3.  What practices or rituals help you to remember that you are not in control or keep you connected to your vulnerabilities? How important is it to have periods of quiet reflection? How does busyness prevent us from encountering the vulnerable Jesus?

4. Who are the vulnerable people in your congregation or in your community? How does the church extend love and shalom to them? Is God calling you to increase your participation in this message of love and resurrection?