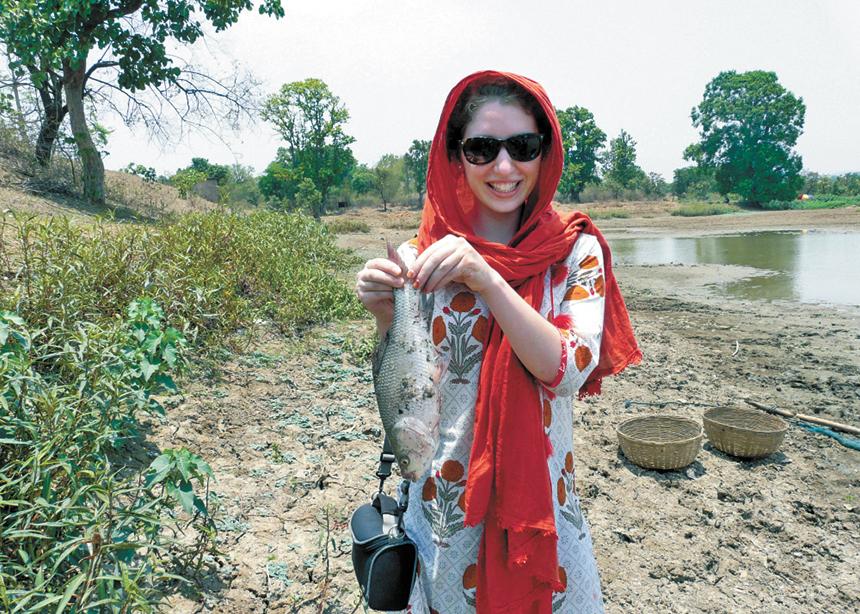 I caught this fish with my own hands! (Photo by Sara Wyngaarden)

For the past year, Sara Wyngaarden of Elmira, Ont., has been in India, participating in the Serving and Learning Together program (SALT) of Mennonite Central Committee (MCC). This reflection originally appeared on her blog.

Last week I had the privilege of visiting Jharkhand, a state in eastern India where MCC has partnered with local Mennonite church organizations on a food security project in some of the villages. The local staff agreed to show me the ropes, including giving me the opportunity to stay with hosts in the villages themselves. I couldn’t have been more excited!

When I arrived at my first host’s home, I was greeted by a crowd of people singing, dancing and pounding on drums. A woman sprinkled water on me using a branch of leaves. Children gave me bouquets of flowers and threw loose petals onto my head. This is a traditional village welcome, and I gladly joined the dancers, who led me all the way from the road into their home.

After providing a chair and a glass of water, some women approached me with a jug and a large plate. “In our tradition, when a guest comes, we wash their feet,” someone explained. And indeed, this is how I was welcomed into multiple homes where I visited or stayed that week.

Now, I’ve had my feet washed before. In my home congregation, Elmira (Ont.) Mennonite Church, we practice foot-washing whenever we take communion. It’s a reminder that Christ calls us to be servant leaders, interacting with love and humility towards one another (John 13:1-17). I’ve always appreciated the experience.

But this felt vastly different from that symbolic gesture. These women weren’t removing my well-shined Sunday shoes to reveal my sparkling, rose-smelling tootsies. They were removing my dusty, sweat-stained, well-worn and falling-apart shoes to reveal smelly, calloused feet whose nails could use a good cleaning. And they washed my feet, pouring cool water over the well-tanned skin, gently massaging the well-worked muscles, and tenderly drying ten wiggling toes. What an incredible feeling.

I told my hosts, right off the bat, that I wanted to try everything. I’ve visited multiple villages this year, so I know that many aspects of “village life” look different from the “city life” I experience in Korba, where I have lived most of the year. I asked MCC for this opportunity because I wanted to actually experience the pace of things—the day-to-day work that people in the village perform. I hoped they would let me participate in any nitty-gritty thing, from sweeping to hoeing to gutting fish. I imagined that I would be working and resting right alongside my hosts from dawn till dusk.

That wasn’t exactly a realistic dream, of course. Hospitality is such a central tenet to Indian culture that I knew being treated like a guest was inevitable, especially when staying for just a week. Even after months of living with my host family, it’s still a battle for me to help with the dishes! The fact that my hosts in Jharkhand allowed me to do as much work as I did is notable indeed. I had the opportunity to carry rocks and water on my head, catch fish and help with cooking and sewing, among other things.

One of my favourite authors is Max Lucado. At the beginning of In the Grip of Grace, he writes what he calls “the parable of the river.” It’s about four straying sons and the fifth who goes out to retrieve them. One of the four who strayed decides to work his way back to his father’s home by building a stone pathway across the river. When the eldest finds this brother, he tells him to leave the project because the river is too long, the task is too great, and besides his father will forgive him. He offers to carry his brother home. The brother refuses, determined to finish his work, to win his father’s favour and earn his mercy. The most poignant line in the parable comes when the eldest says to his brother, “Favour won is no favour. Mercy earned is no mercy.” And we could add one further, “Grace deserved is no grace.”

Sometimes I get confused about God’s grace, thinking I need to impress God through my actions in order to receive it. I think his favour is something to win; his mercy is something to earn; his grace is something of which to be worthy. I want to work for it, sweat for it, get completely dirty and then receive it as a delightfully cleansing bucket bath. But if I had to be deserving in order to be received by God, then his grace would be irrelevant. And if I had to work my own way back to him, well I would never make it there at all.

That’s what makes our God so incredible. He extends true grace; it is completely undeserved. And he sends his son, Jesus, to carry us home so that we can live in the light of his favour. We need only to say “yes.”

Hospitality isn’t a perfect parallel, but it can certainly involve a lot of grace extended, particularly in a cross-cultural context. I’ve received an abundance of grace from my hosts this year, as I fumbled around their culture, learning like a young child. There was grace for the awkwardness of language barriers and for my cultural faux pas; grace for my bouts of homesickness and my reactions to culture shock; grace for my misplaced energy in some moments and for my utter fatigue in others. And ultimately, they graciously welcomed me into the middle of their lives as a guest, observer and participant for months upon months.

I didn’t come to India to have my feet washed. Quite the opposite, in fact. I anticipated doing much more of the figurative “foot washing” myself. But things haven’t been quite as I imagined. And as I poured buckets of lukewarm water over my head that day in Jharkhand, I pondered, if I struggle this much to receive hospitality for one year, then how can I truly receive God’s grace, which I need every single day of my life?

It’s a lesson I needed to learn, and to continue learning. God’s grace is not about my worthiness. And good hospitality isn’t either. It’s about the generosity, the humility and servant leadership, the love being expressed by the giver. And so, I remove my shoes, extend my dirty feet, and receive this cleansing water with gratitude and awe. 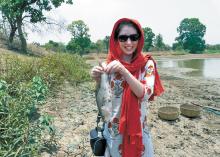 I caught this fish with my own hands! (Photo by Sara Wyngaarden) 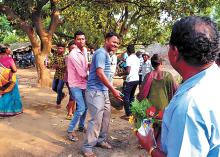 I snapped one quick pic before they pulled me into the dance! Some of the men are drumming and singing, ladies are dancing in a line on the right, kids are here, there and everywhere! (Photo by Sara Wyngaarden) 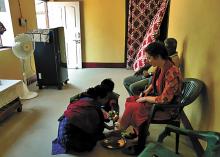 When your feet are dirty, having them washed by others is a humbling experience. (Photo by Sara Wyngaarden) 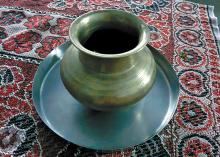 The pitcher and basin my hosts used for washing the feet of guests. (Photo by Sara Wyngaarden) 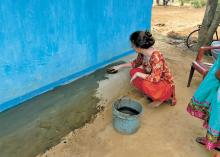 A mud, manure and water mixture is used to make and maintain homes. (Photo by Sara Wyngaarden) 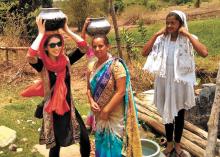 Carrying water on my head. (Photo by Sara Wyngaarden) 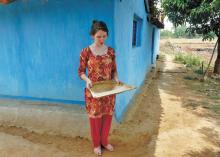