Encountering the gifts of a global church 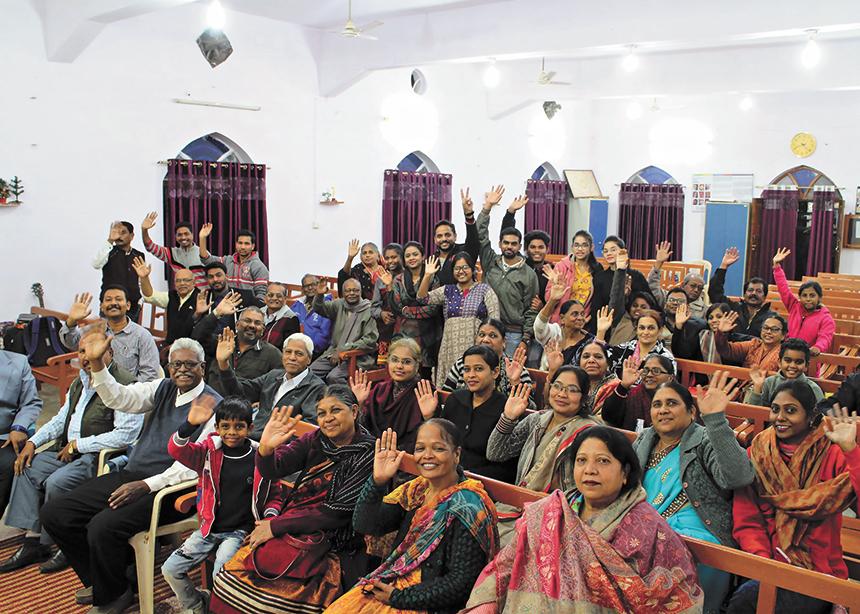 The world is getting smaller. Peoples, places and cultures that in the past existed in distant lands may today be just around the corner. Here in North America, because of migration, many neighbourhoods have become mosaics of people of a variety of skin colours, languages and cultures. Some of the newcomers are Christians and they exemplify what most of the Christian world looks like. They are the global church.

The term “global church” recognizes that the majority of people making up the Christian world come not from the West or North but from the South. To speak of a global church is to acknowledge the cultural diversity and the international and multicultural nature of the church. The term also highlights the equality and mutuality of affluent and poor churches around the world. If churches in North America and Europe used to shape the agenda of worldwide mission, today the aim is to build egalitarian relationships in which every voice is welcome to contribute to the conversation.

The trend is toward partnership relationships between churches. In doing so, there is a recognition that the church is composed of people from far and near, people from different social, cultural, ethnic, economic and political backgrounds.

Today, churches in the West have a unique opportunity to welcome and engage with the global church in their own places. In the intersection of these churches, it is important to remind ourselves that many of these seekers and followers of Jesus come from an unprivileged life. Most of the global church still lives in Asia, Africa and Latin America, where many are poor and where even elementary education is a luxury.

Unlike most Christians in the West, they face suffering, persecution and misunderstanding. Yet, as Latin American theologian and pastor Samuel Escobar reflects, theirs is a grassroots Christianity “marked by a culture of poverty, an oral liturgy, narrative preaching, uninhibited emotionalism, maximum participation in prayer and worship, dreams and visions, faith healing, and an intense search for community and belonging.”

With a diverse body comes a variety of gifts. In all their multiplicity, those gifts are meant to be valued and integrated into the life of the church, for they have been given by God (I Corinthians 12). Every person, of whatever background, has received “grace according to the measure of Christ’s gift” (Ephesians 4:7). Therefore, that grace is meant to be used to enrich and equip the church.

A global church brings a variety of gifts to our North American context:

One of those is “cultural diversity,” which in itself is a gift from God.

The Apostle Paul affirms that we are one body with many parts and gifts (I Corinthians 12). The global church brings different skin colours, tastes, cultural expressions, languages, worldviews, and theological and life perspectives. Yet such diversity is missing in many North American churches.

Indeed, “if you survey churches during Sunday morning worship, you will find that they are not as culturally diverse as the neighbourhood they serve,” says Paul Kroeker, author of Every Tribe and Nation: Cultures and the Kingdom of God. What would happen if churches in North America lived out their faith in the way of intercultural inclusion, acceptance and solidarity?

A second gift is joy and spontaneity in worship.

The integration of emotions into worship is a common experience in the global church. While a regular service may have some structure, non-western Christians see spontaneity as an appropriate way to respond to God’s presence and work. This response may take the form of singing aloud, shouting hallelujahs or crying. Joy is externalized in dancing, clapping and other kinds of body movements. In the eyes of Christians in the West, displays of joy and spontaneity in worship may seem confusing and messy, especially if prophecy, dancing, visions and charismatic experiences are not part of their tradition. But these biases are rooted in culture, sometimes in racism, often in misinformation or in a sense of superiority.

Christians from the global church who migrate to North America sometimes also view their brothers and sisters from the North with suspicion. They don’t see solemnity, structure and preparation in worship as gifts but as formalities. In this case, too, judgment arises out of cultural differences, ignorance and a sense of spiritual superiority.

What would happen if churches from western and non-western societies made an intentional effort to get together, learn from each other’s strengths and practise mutual encouragement—for the sake of the global church?

A third gift is passion for reaching out.

The global church is a community that engages its neighbours with the good news of the kingdom of God, for it takes the Great Commission seriously. It has a sense of responsibility and urgency. The sense of responsibility lies in the authority given by the Messiah to his followers to go into the world and announce the dawn of a new age (Mark 16:15; Acts 1:8). The sense of urgency lies generally in an apocalyptic worldview: Because the world is coming to an end soon, the church must actively participate in God’s mission in the world.

In contrast, in Canada I have observed fear and reluctance about witnessing to one’s faith outside the church. Many of us have seen examples of bad evangelism: random confrontation of people on the street, short-term mission trips that fail to establish relationships, unscrupulous televangelism that preys on the gullible and obnoxious defences of the faith on the internet.

Fear of being identified with these approaches justifies Canadian Christians in keeping their witness to themselves. Also, cultural sensitivity to others’ values and views makes many Canadian Christians reluctant to share their faith. They do not want to offend people with a religious outlook they might find disagreeable. Consequently, they keep their faith private.
But a global church understands that its commission and authority come from God. For this reason, people in the Global South live out the missionary task with courage, love and obedience, and sometimes at great personal cost. They reveal a passion to proclaim the good news to anyone open to hearing it.

It isn’t surprising that Christianity is not only surviving but also growing in the Global South. What would happen if churches in North America let their partners in the Global South help them rediscover and rethink their theology and practice of witness?

Fourth, a global church comes bearing the gift of resilience in the face of suffering.

In the West, our main problems are related to mental health, violence, irregular migration, politics and various pressing international matters. Levels of anxiety, depression and the incidence of eating disorders and addictions are growing.

The hardships faced by Christians in the Global South are of a different sort. They do not enjoy positions of privilege. Poverty is a given. Most are at the margins and they face situations of social, political, military, religious and racial conflict. Persecution resulting from missionary activities is a real possibility, yet they are willing to risk their lives for the sake of the gospel. They are aware of Jesus’ warnings that his disciples will be rejected and persecuted (John 15:18-16:4).

Despite all the challenges, Jesus-followers around the world find meaning, hope, strength and joy, and they experience resilience in the Spirit of the One who invited them to be part of his great multiethnic family (Ephesians 2:14-16; Revelation 7:9-10).

The concept of a global church finds its roots in the New Testament. In the beginning, the Jesus’ movement was mostly a Jewish movement. When his followers spread throughout the Mediterranean world, the movement became empire-wide and multiethnic. The challenge Jewish and Gentile believers faced was how to live together peaceably despite their theological differences.

Under these circumstances, it is understandable that the Apostle Paul’s main concern in his letter to the Romans was about the unity of these assemblies. After laying out a long, complex argument, the apostle advocated for the unity of the body of Christ (12:1-8). The climax of Paul’s argument is the exhortation to “welcome one another, therefore, just as Christ has welcomed you, for the glory of God” (15:7). As New Testament scholar Gordon Zerbe observes, “[E]verything in Romans leads, in one way or another, to this dramatic and concluding exhortation.”

To Paul, God’s action through the Messiah Jesus is the creation of a new humanity. He affirms that whoever trusts Jesus is incorporated into God’s covenant people regardless of their cultural, social, national and ethnic background.

The global church is a diverse body consisting of a variety of members, united by God’s grace as embodied in the self-giving sacrifice of the Messiah on the cross (Romans 3:21-26). From eternity, God dreamed of building a multiethnic community of people who would embody God’s love, justice, blessing and peace in the world.

A global church is a gift for a fragmented, self-centred and independent humanity. A global church with all its complexity offers the possibility of embodying unity, while acknowledging and embracing diversity, by welcoming the gifts that followers of Jesus from every nation, tribe and language bring to the table.

Adapted from an essay in Vision: A Journal for Church and Theology, Fall 2018. José Luis Moraga was born and raised in Santiago, Chile. He moved to Canada in 2011 and currently is pastor of discipleship at Springfield Heights Mennonite Church in Winnipeg.

2. José Luis Moraga says that churches in the Global South have more joy and spontaneity in worship than do most western churches. Do you agree? What are some of the strengths of being more emotional in worship? Why is worship in western churches less apt to be spontaneous?

3. Moraga writes that he finds Christians in Canada more reluctant to witness to their faith than Christians in the Global South. Do you agree? What makes the global church readier to proclaim the good news in spite of personal cost? How much resilience do Canadian Christians have in the face of possible suffering?

4. How can our churches do a better job of increasing cultural diversity within congregations? Is it more difficult for Mennonites to achieve cultural and ethnic variety than other Christians? 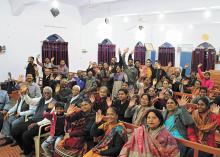 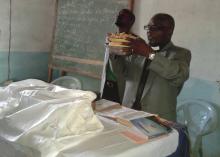 Laston Bissani Mitambo, an evangelist who has planted many churches in the Palombe District in Malawi and in the Zambezia Province of Mozambique, prays for the communion bread. (Photo courtesy of Laston Bissani) 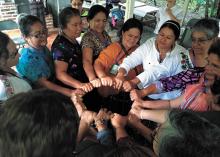