‘It is the attributes of children in their dependence, powerlessness, trust and hope that point us toward the community we need to rebuild’ 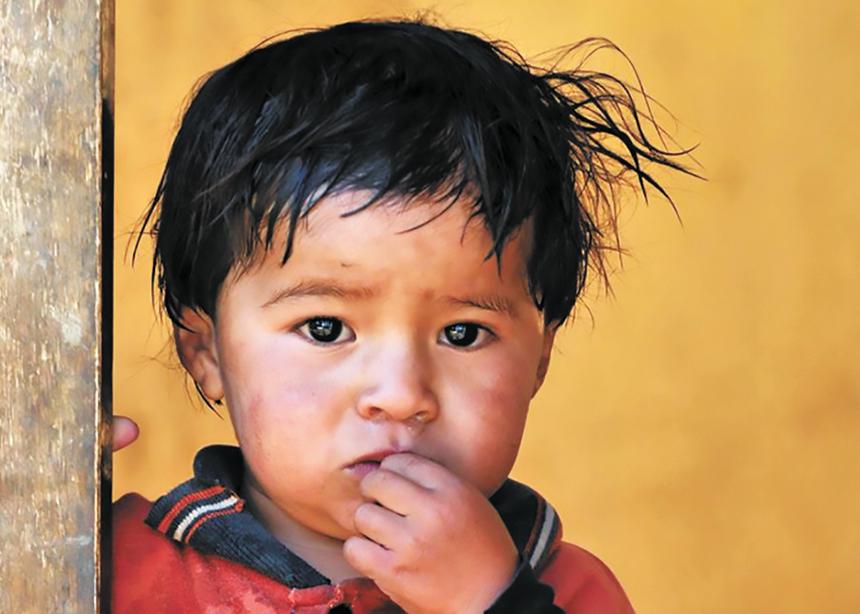 Unlike their elders, who have more years behind than ahead, children and youth have the benefit of unlimited possibilities for their life. (Photo taken from povertyinstitute.ca)

This year marked the 30th anniversary of the United Nations Declaration of the Rights of the Child. Fittingly, the theme of the 2019 Universal Children’s Day, held on Nov. 20, was “Acting together to empower children, their families and communities to end poverty.”

Despite decades of progress, millions of children remain trapped in poverty. According to the World Bank, around 385 million children live in extreme poverty across the globe. In Canada, poverty affects more than a half-million children, while in Calgary around 33,000 children live in poverty—enough to fill the city’s McMahon Stadium, where this year’s Grey Cup game was played.

What does it mean to live in poverty, especially if you are a child? Our society has determined that child labour is not acceptable, so poverty among children becomes much more complex because it is detached from questions of personal accountability and even money.

A number of years ago, the Canadian Poverty Institute led a study to understand poverty from a child’s perspective. The study determined that poverty for a child involves four dimensions. First, there is the material dimension of poverty in which children lack the resources necessary to help them grow and thrive. Also important is the availability of supports and services that can help them develop to their fullest potential. At a deeper level, children often experience a poverty of relationships, especially when they are without older adults who can mentor and support them and be positive role models. The deepest poverty, though, is the poverty of hope and dreams, when children can’t envision a bright future for themselves or they can’t see that they will have any purpose in it.

The poverty of hope is the most troubling. This has been eloquently stated by the young climate activist Greta Thunberg, who challenged adults at recent public demonstrations, including at the United Nations in New York City. “This is all wrong,” she said. “I shouldn’t be up here. I should be back in school on the other side of the ocean. Yet you all come to us young people for hope. How dare you? You have stolen my dreams and my childhood with your empty words.”

Yes, we look to our youth for hope. Christ holds up children as a model for people to look to if we want to envision the kingdom of God (Matthew 18:1-5; 19:13-15). This is a remarkable role reversal; typically, adults try to find role models for children, not the other way around.

There are four attributes of children that tell us something about the kingdom of God:

• The first attribute of children is dependence.
As the centre’s research into child poverty has shown, children are utterly dependent on others—on their parents, on the other people around them and on the supports that society provides for them. This is the meaning of the saying, “It takes a village to raise a child.”

Often children also have a deep understanding of their dependence on God. Sadly, as children grow, adults encourage them to become independent, as though, on our own, people can individually provide what we most deeply require without the gifts of community, society and God.

• Second, children are often known for their powerlessness.
At a fundamental level, the right to vote begins at the age of 18, as does the power to make decisions apart from parents or guardians. Adults often tell children to be quiet and listen, which means youth can’t offer a meaningful voice in decisions, especially those that affect them. Many people have dismissed Thunberg as “a little child” who should just be quiet. Even as she gathered a large rally on the steps of the Alberta legislature, a convoy of truckers headed north to shout her down.

Yet Christ says that it is the powerless ones who have power, that the powerless will experience the kingdom of God. In a vision of the future kingdom, the prophet proclaims: “The wolf also shall dwell with the lamb, the leopard shall lie down with the young goat, the calf and the young lion and the fatling together; and a little child shall lead them” (Isaiah 11:6).

• The third important attribute of children is trust.
Healthy dependence requires trust as a foundation. Unless damaged, trust is instinctual among children, who trust, first of all, their parents to provide for and protect them. Christ uses the relationship between parent and child as a metaphor for the relationship between people and God, inviting his disciples to call God “Father.” Children also place implicit trust in their surroundings, and they require a stable and healthy environment in order to grow and thrive.

Trust is essential not only for children, but for everyone to live together in community. But as humans grow older, our trust seems to diminish. Research tracking levels of trust across the world, including Canada, shows remarkably low and declining levels of trust in our institutions and leaders. When trust is lacking, people cannot experience the kind of cooperation necessary to reassure young people that we are capable of preserving the future for them and all future generations.

• This brings us to the most important attribute of children: Hope.
Unlike their elders, who have more years behind than ahead, children and youth have the benefit of unlimited possibilities for their life. They have decisions yet to make and paths yet to choose. There is the hope for a future, a hope that Christ and the prophets also call us to envision, as in the prophecy of Isaiah. Yet the cry of many youth is the opposite, decrying an apocalyptic vision of the future that the children and youth of this world did not participate in creating.

This is the tragedy of child poverty in all its dimensions. Poverty is ultimately contrary to the will of God, as it not only violates the lives of children, but also the childlike attributes that Christ calls his followers to emulate.

One of the important impacts of child poverty is that it disrupts what should be healthy dependent relationships. Disrupted relationships have long-term effects on children that persist well into adulthood. Poverty disrupts dependent relationships through abuses of power. When people grow to view themselves as independent of each other and God, this separation mars their identity and allows injustice to flourish. We abuse power when we fail to see each other as beings bearing the image of God.

When power is abused and dependent relationships are damaged, trust is broken. This extends to a lack of trust in God, whom we come to doubt as capable of providing. It also speaks to a broken trust between people, who see each other as competitors rather than as neighbours.

Broken trust in the people and systems that should provide and protect is the opposite of the kingdom of God. God’s vision is for an interdependent community in which all needs are met and all people find meaning and purpose. Poverty typically robs people of both meaning and purpose, and, consequently, of hope.

Poverty closes doors and blocks pathways of opportunity. It prevents people from becoming who God has designed them to be. Poverty robs all of us of the gifts that God provides through other human beings. When poverty robs children of hope, it robs all of us of hope in a future that our children will inhabit.

“Why should any young person be made to study for a future when no one is doing enough to save that future?” asks Thunberg. “What is the point of learning facts when the most important facts given by the finest scientists are ignored by our politicians?”

American author and evangelist Jim Wallis points out that the most vulnerable people in our society are the first to feel the effects of changes in our environment, be they social or ecological. It is up to us to pay attention, because these are the ones who point us toward the kingdom of God.

In Matthew 6, Jesus tells his disciples not to worry about how they were going to be fed, housed or clothed. Rather, he says, work for the reign of God and everything else will fall into place. So children point us toward a new reality that is not inhabited by the independent and powerful, but by those who recognize their interdependence with each other.

In this reign, people of all ages live out just and peaceful relationships free from exploitation and the abuse of power. This kingdom is marked by trust in God and each other, with hope for the future—for our generation and the ones to come. If we work to build that kingdom, the rest will indeed be given to us.

In the end, we work to heal the wounds that poverty inflicts on all of us when we allow damaged relationships to divide people one from each other and generation from generation. Ultimately, it is the attributes of children in their dependence, powerlessness, trust and hope that point us toward the community we need to rebuild.

Derek Cook is the director of the Canadian Poverty Institute at Ambrose University and serves as the representative of Mennonite Church Canada on the Canadian Council of Churches’ Commission on Justice and Peace. He attends Foothills Mennonite Church in Calgary. This is adapted from a talk he gave at Ambrose University Chapel in Calgary on Oct. 22.

1. How much child poverty is there in your community? Is there a difference between experiencing a lack of money and living in poverty? How do the churches in your community serve disadvantaged children? Do you see a long-term solution to this problem?

2. Derek Cook writes that, according to the Canadian Poverty Institute, children living in poverty “often experience a poverty of relationships.” He also states, “Poverty disrupts dependent relationships through abuses of power.” Do you agree? What is the connection between poverty and unhealthy relationships?

3. Greta Thunberg, a young climate activist, has expressed despair about the future. Do the young people you know also have a gloomy outlook? Do we instinctively expect children to represent hope? How does the Christmas message express hope for you? Do you agree that children lose a sense of dependence on God as they mature?

4. According to Cook, the childlike attributes of the kingdom of God are dependence, powerlessness, trust and hope. Why is it challenging to aspire to these attributes? How important is it to build communities based on these qualities? 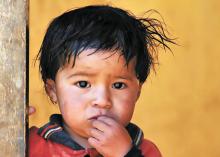 Unlike their elders, who have more years behind than ahead, children and youth have the benefit of unlimited possibilities for their life. (Photo taken from povertyinstitute.ca) 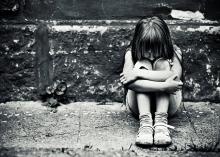 ‘Christ holds up children as a model for people to look to if we want to envision the kingdom of God . . . . This is a remarkable role reversal; typically adults try to find role models for children, not the other way around,’ writes Derek Cook. (Photo © istock.com/lmgorthand)

homelesshub.ca/gallery/bad-worse-child-poverty-rates-canada (Infographic created by the Canadian Centre for Policy Alternatives based on 2006 Canadian census data.)