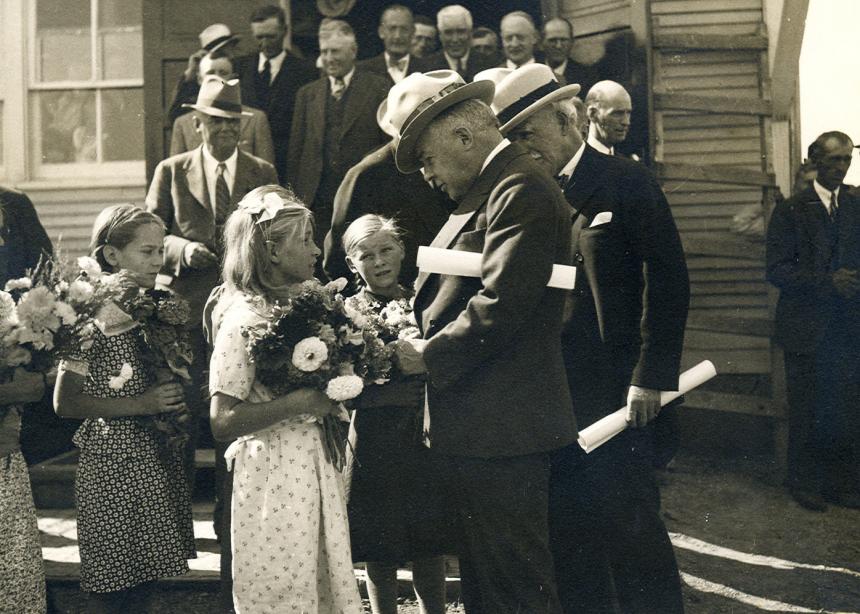 Edward Beatty, front row right, and John Dennis, behind him, speak with Mennonite girls. Dennis was a young man in 1874 who witnessed the Mennonite immigration to Manitoba. Over the next decades, he observed that the Mennonites were honest, hardworking and trustworthy farmers. By 1922, he was a commissioner of the Canadian Pacific Railway. He convinced Beatty, his boss, to extend credit of $400,000 to bring Mennonites from Russia to Canada based on a handshake with Bishop David Toews and the Mennonites’ good name.  The amount grew to $1.7 million. At a service in Coaldale, Alta., in 1938, B.B. Janz, a Mennonite leader, said, “Not just one generation was saved, but also their children and the generations to come. In the midst of a world full of suspicion and ill will, . . . Colonel Dennis, you have continued with trust and confidence. . . . We thank you for this confidence and faith.” Dennis struggled to keep his composure as a group of teenaged girls laid bouquets of flowers at his feet, saying, “You saved our lives. Thank you.” 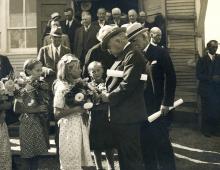 Thank you for reminding us of Colonel J. S. Dennis’ contribution when the Canadian Pacific Railway saved the lives of thousands of Mennonites. The CPR benefited from cheap labour from internment camps set up by the Canadian government, using incarcerated immigrants from the Austro-Hungarian empire during the First World War. That experience was quite negative for the CPR. Then Dennis was seconded to the International Red Cross and travelled to Siberia where he saw firsthand the destruction of the Russian civil war. It was upon his return from seeing suffering firsthand that he made the agreement with Bishop Toews. The story of the CPR’s change of heart is yet to be told. And our grandparents’ suffering changed the course of Canada’s narrative, Canada’s history.