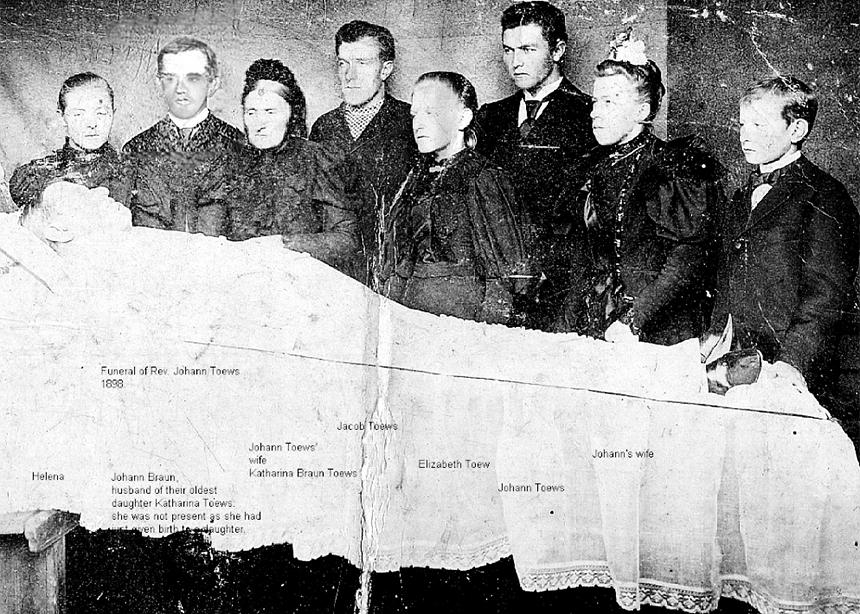 Funeral picture of Reverend Johann Toews Sr. (1845-1898). Third from right is Johann Toews, the letter writer; far right is Wilhelm Toews, who received the letters. Second from left is John Braun’s great-grandfather Johann Braun (1869-1922), whose wife Katharina Toews Braun is not pictured because she had just given birth. (Photo courtesy of John Braun)

When John Braun was contacted by a relative he didn’t know existed, it was the start of a long adventure into family history and an old language.

Braun pastored Charleswood Mennonite Church in Winnipeg for the last 25 years and is currently an interim pastor of Bethel Mennonite Church, also in Winnipeg. He received an email in the spring of 2019 from Ruth Anne Taves, a very distant cousin in British Columbia who is not Mennonite but who was interested in exploring her Mennonite roots.

Taves wanted to get in touch with Braun after seeing his numerous contributions about their shared ancestors in the Genealogical Registry and Database of Mennonite Ancestry. She had reached out to another distant cousin in Minnesota, Karen Toews Howden, and discovered that Howden had more than a hundred family letters sent between 1899 and 1933.

Wilhelm was the recipient of the letters, which were written by his older brother, Johann (1877-1933), another Toews sibling, in the Soviet Union.

However, the cousins could not unlock these family secrets in front of them because they were written in German gothic script, which they couldn’t read. To their surprise, Braun told them he could read the letters.

“My grandmother taught me that script when I was a kid, when I was a teenager, because I was very interested in old family documents,” he says. “I’ve been a genealogist all of my life. . . . I’ve been interested in family history for ever since I can remember.”

Braun offered to translate all the letters. He transliterates the Gothic alphabet into the Latin alphabet and then translates the German text into English. Of about 120 letters, he has translated half in the last 15 months.

Braun is intrigued by oral tradition. “We’ve often concentrated on the literary criticism or the literary part of [the gospels], but there’s this oral part that came before it was written down,” he says. There is a power in oral tradition, and he enjoys examining that both in the Bible and in his own family story.

Braun’s opa (grandfather) told him a story when Braun worked in the fields with him as a kid. “Wilhelm was different than a lot of Mennonite boys. Wilhelm was a poet,” Braun says, retelling the story. “In fact, he would write poems on the pumpkins in the pumpkin patch. And the poems would often have to do with ‘Amerika.’ One day, Wilhelm was gone. And they didn’t hear from him for months and months. Then one day they got a letter from Wilhelm. He was in Amerika.”

Wilhelm had travelled to Mountain Lake, Minn., in 1906, when he was about 20 years old. He became the editor of two newspapers there, and after a few years he found a community and got married. Braun’s opa told him the story in the 1960s, 60 years after it took place. Now in 2020, another 60 years later, the story came full circle when Howden, Wilhelm’s great-granddaughter, contacted Braun.

From within the letters unfolds the story of two brothers communicating across the ocean. In the first few letters before Wilhelm goes to America, Johann comforts him when both their parents die suddenly at a young age. When Wilhelm becomes deeply homesick in America, and doubts whether he has made the right choice, Johann strongly encourages him to stick with his decision and stay there. Later letters are filled with Johann’s wishes to join Wilhelm in America.

When COVID-19 was beginning to race around the world, Braun was translating letters written in the years around 1920. These were years of widespread disease caused by the Russian Revolution, civil wars and famine, as well as the 1918 influenza pandemic. All the Toews sisters, including Braun’s great-grandmother, died of tuberculosis. “I couldn’t help but see that there are echoes in history,” he says.

He was also struck by the tension in the letters about the political situation in the Soviet Union. Life was falling apart and the Mennonite colonies were no longer the same. Johann was arrested in 1929 and sentenced to five years of hard labour in Siberian exile because he was a Mennonite minister teaching religion to children.

Braun’s dedication to learning and preserving family history stems from his passion for stories. He is translating the letters sequentially because discovering what happens next in the story is what keeps him going. He says it is fascinating to see someone’s mind develop and mature over the span of three decades.

Next up are the many letters Johann wrote while in exile. 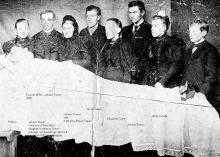 Funeral picture of Reverend Johann Toews Sr. (1845-1898). Third from right is Johann Toews, the letter writer; far right is Wilhelm Toews, who received the letters. Second from left is John Braun’s great-grandfather Johann Braun (1869-1922), whose wife Katharina Toews Braun is not pictured because she had just given birth. (Photo courtesy of John Braun) 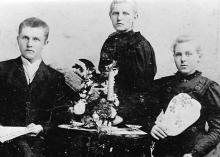 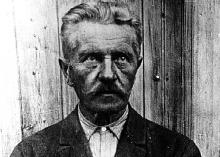 Johann Toews, the letter writer, when he was sentenced to five years forced labour in exile. (Photo courtesy of John Braun) 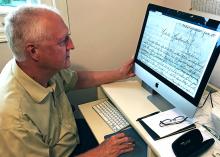 John Braun, currently interim pastor of Bethel Mennonite Church, has always had a passion for stories and genealogy. (Photo by Nicolien Klassen-Wiebe) 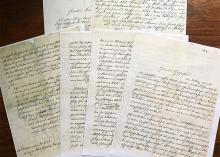 The letters, written from 1899 to 1933, reveal the story of two brothers, Wilhelm and Johann Toews. (Photo by Nicolien Klassen-Wiebe)