Like Peter, sometimes we are not prepared for the way life is going to treat us 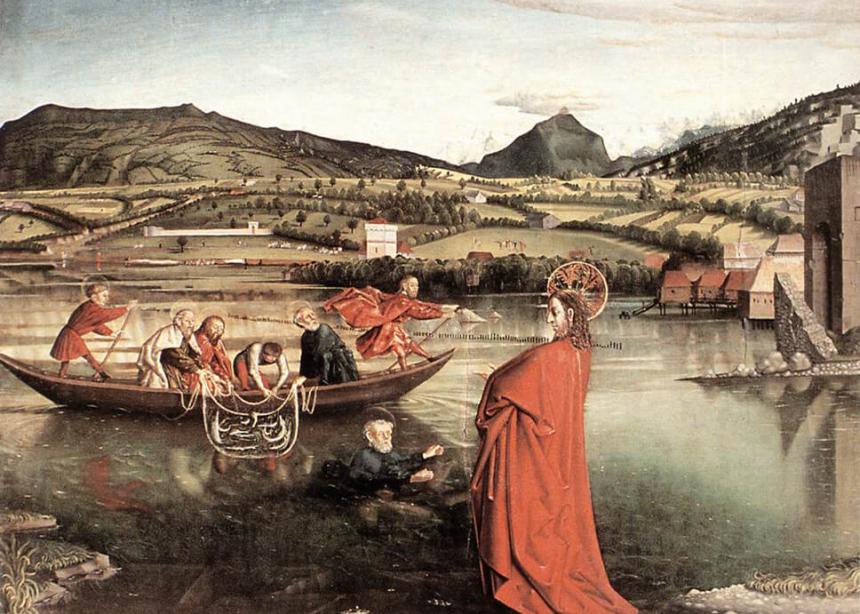 Excerpted and translated from a sermon preached at Niagara United Mennonite Church, Niagara-on-the-Lake, Ont., on April 26, 2015. It is based on chapter 21 of the Gospel of John, the well-known story of the disciples back in Galilee shortly after Easter.

The entire Easter story is full of tension and contradictions. And the disciples had to live through all of it: The glorious entry into Jerusalem, the repeated sparring with the Jewish religious leaders, followed by Jesus’ apprehension, the religious and secular court hearings, the crucifixion and finally his burial. It all must have seemed like a huge storm with a terrible, tragic end. And in spite of all the warnings and predictions Jesus had given them, they were not prepared for it.

But then came Easter morning. And for that they were not prepared either, even though Jesus had predicted that as well. The disciples were completely lost. Their entire world was turned upside down. They could not see how life would continue or what would happen next. Everything must have seemed as in a fog: “Lord, where shall we go? What do you want us to do now?”

Of course, they knew that Jesus had risen from the grave. After all, they had seen him several times and had even touched him. But everything must have seemed beyond reason and understanding. Now they had returned to Galilee. That was where they had lived most of their lives. And, after all, Jesus had told them to go back to Galilee, and that he would meet them there.

‘Lost in my own wilderness’

When I saw the lostness of the disciples, and especially Peter, it felt as if I was looking into a mirror, and saw myself last year, lost in my own wilderness, shortly after the death of my wife of 50 years.

Finally, Peter made what he must have considered to be a reasonable suggestion. “I’m going fishing” he said. It seemed to be the most natural thing to do: go back to what they knew best and what they had done all their lives. And the others followed. And why not. Now they at least had something useful to do and they hoped that the fresh sea breeze would blow all those miserable thoughts out of their minds. And once they were properly tired from some honest work, they hoped to be able to sleep again. And tomorrow the sun would rise again, and there would be a new day—for them and for me.

How often have I been through that same miserable state, when stress rises to the point to wake me up at 4 in the morning, and I can’t go back to sleep any more? Yes, I can understand Peter all right. I also prefer to work, rather than to think and worry.

But sometimes you work all through the night and you still don’t catch anything. “Lord, what shall we do?” Not even fishing works any more! Yes, sometimes I don’t understand life any more. It’s all a giant puzzle, and none of the pieces fit together. You work so hard! And you strain to get it all done. But sometimes all our busyness doesn’t seem to get us anywhere. Could it be that we are trying too hard to get it all done by ourselves, often without God?

‘How is life treating you?’

Sometimes people greet me with the question: “How is life treating you?” Personally I don’t like that view of life. I don’t like to sit back and wait to see how life is going to treat me. I prefer to treat life myself, my way! But with the passing years I have had to learn that I don’t always have the choice. Sometimes life treats me, and not always the way I like it.

Yes, sometimes we are not prepared for the way life is going to treat us, in spite of all the warnings we were given, just the same as Peter wasn’t prepared for the events surrounding Jesus’ crucifixion and resurrection. In spite of all the warnings, he was not prepared for the temptations in the high priest’s courtyard. He had been so self-assured: “ ‘Even if I have to die with you, I will not deny you,’ he said. ‘Don’t deceive yourself,’ Jesus said. ‘Before the rooster crows this night, you will say three times that you do not know me.’ ” And Peter couldn’t shake these thoughts. Every time he heard a rooster crow, the sound cut through his thoughts, and gave him no rest.

Then the morning dawned and they were all tired from a long night of unproductive work. They had thought they could do something useful: Catch some fish, have something to eat and sell the rest. They were tired, having nothing to show for their efforts, and they rowed back to shore, more lost than before. Everything seemed so useless to them . . . and to me.

But why? Easter has happened! Jesus has risen! Jesus lives! Sure. But where is he now? What shall we do now? Lord, where shall we go? We thought you had words of eternal life. But what will the present life demand from us now? We have no problem with eternity. It’s this present life that is an awful bloody mess that we don’t know how to deal with any more!

And then this man stood on the shore, asking his disciples: “‘Well friends, did you catch any fish?’ ‘No, not a single one.’ ‘Well, cast your net on the right side of the boat. Then you will make a good catch.’ ”

What difference would that make? What did he know about fishing? After all, the fish were in the water where they wanted to be. They didn’t care about one side of the boat or the other. But they were too tired to argue, and just did what the stranger said. And suddenly it happened! Where did all these fish come from? They caught so many fish that they couldn’t even pull the net into the boat.

Finally John recognized the stranger. “It’s the Lord,” he shouted. Really? Is that really possible? And when they reached shore, Jesus already had a fire burning, and even some fish on it, and bread as well.

But could he still not hear what Jesus was really trying to tell him? Well, I think I can understand Peter. I would also much rather just go fishing, forget everything, start afresh, without all these complications and uncertainties!

But Jesus gave Peter a new assignment. “Feed my sheep,” he said, because he knew that they—and we—are all like sheep without a shepherd. And he added, “Take care of my sheep.” Was that really a sign that Jesus had long forgiven Peter? Had he not given Peter the same assignment three years ago? “Simon,” he had said, “your fishing days are over. From now on you will catch men. . . . Now take care of my sheep.”

Peter was allowed to start fresh. In fact, he was supposed to start afresh! But not in his own old way. Jesus said to him, “I tell you the truth, Simon, when you were younger you dressed yourself and went where you wanted. But when you are old, you will stretch out your hands, and someone else will dress you, and lead you where you do not want to go.”

In other words, “Peter, you thought you could master your own life. You didn’t have to wait to see what life would offer you or how it would treat you. You grabbed life with your two fists and pressed your own will on it. But since then you have had to learn that was not always successful. Life does not always obey our own will! Now follow me because you do not know the way! But that is not necessary now. You are not leading the way any more. Now I am leading you. I am the way! You just follow me!’

Just follow? Peter wanted to know more. Just like you and I do. He still didn’t want to give up. He turned around, saw John following them, and asked, “Lord, what about him?” But Jesus said, “If I want him to remain alive until I return, what is that to you?”

In other words, “You are responsible for yourself and for your assignment, not for him. You just follow me. Feed my sheep!”

And God is faithful. He keeps his promises. When we read the beginning of the Book of Acts, we see how he has turned Peter into a courageous witness in Jerusalem, and into one of the leaders of the early Christian church.

And in the end we all have sheep that we are supposed to feed and take care of, because Jesus calls us as well: “Follow me. Take care of my sheep. I will take care of you. And surely I will be with you always, to the very end of the age.”

Udo Woelke is a lay minister in charge of the German program at Niagara United Mennonite Church.

1. Why would Peter and the rest of Jesus’ disciples have felt bewildered at the end of Jesus’ ministry? What are some aspects of life that cause tension and frustration for you or for your congregation? Do you feel as though you are in control of your life?

2. Udo Woelke writes, “Could it be that we are trying too hard to get it all done by ourselves, often without God?” How do you respond to this question? Under what circumstances should we try to influence the course of our lives? When is it best to relax and accept what life brings?

3. Woelke says that Peter went fishing instead of thinking and worrying. Is doing something and working harder your normal reaction to fear and worry? What are some strategies that might help us deal with fear and worry? 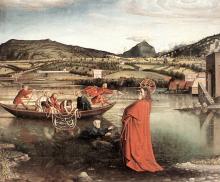