Duet bikes an opportunity for young and old to connect 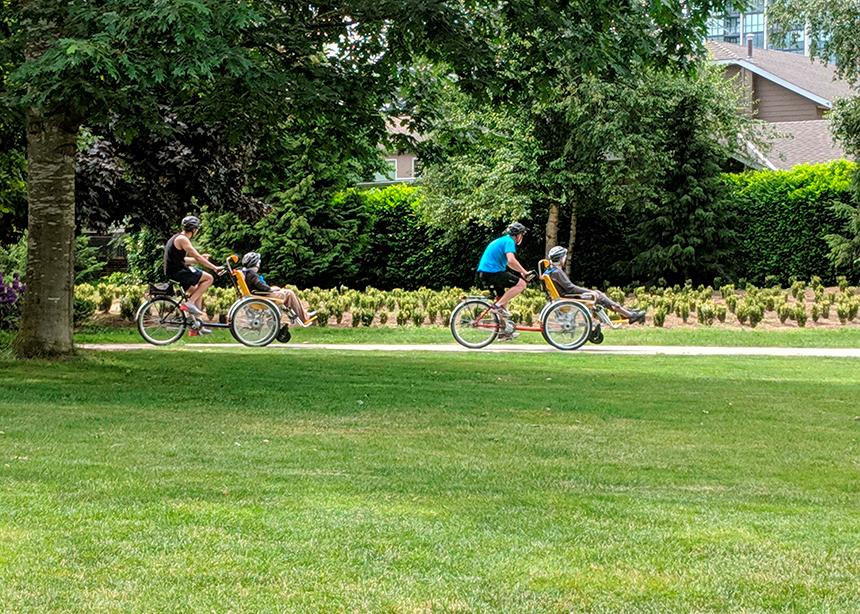 Volunteers take two residents out for a ride on the duet bikes. (Photo courtesy of Menno Place)

People walking around Abbotsford, B.C.’s Mill Lake might have caught an odd sight of seniors riding on duet bikes this summer.

Duet bikes are wheelchair tandem bikes that enable people who have little mobility to get pedalled around by someone who has that ability.

“It’s like a rickshaw in reverse,” explains Dale Carlisle, a rehabilitation assistant for Menno Place, which offers independent and assisted living seniors housing, as well as long-term care.

Menno Place was given a donation earmarked for an activity to improve the quality of life of its residents, Joanne Sweeney, the recreation and volunteer manager, says. In 2018, the team decided to buy a duet bike and look into how the time outdoors and spending time with other people improved the mental health of its residents. Menno Place bought another bike this year.

Cutting-edge research on the mental-health benefits of a duet bike was done for the first time in Canada at Menno Place, Sweeney says. The initial research was completed in August in conjunction with the B.C. Patient Safety and Quality Council, led by Victor Kang, a medical school student from McGill University in Montréal. Preliminary evidence shows there is a reduction in depression for those who score in the moderate range of the geriatric depression scale.

Part of the benefits of the program come from being outside, the seniors say.

“It’s amazing to see some of the smiles on the faces of the residents going out,” Sweeney says. “Some of them haven’t been on a bike in 60 years.”

Carlisle adds that it’s an opportunity for the seniors to forget they’re in care.

“It’s great to see the residents let their hair down, relax and just enjoy nature,” he says.

Carlisle says the program also promotes relationship-building. “Part of it is the communication between the resident and the volunteer. You talk about everything you see, so it’s a good social activity,” he says.

That’s been Emily Pfannschmidt’s experience. She has been working at Menno Hospital, helping in recreation and rehabilitation since last February and has worked in the duet bike program for the last three months.

“I try to make it as therapeutic as possible, so we’re talking with them, singing with them and trying to make sure they enjoyed the ride,” she says.

She gets a lot out of working in the program. “It’s very rewarding for me just to see how the bike ride impacted the folks that went on them. If they were hesitant to come, afterwards they’d say how much they enjoyed the ride and wanted to go again,” she says. “I felt the sense that I was helping someone and that I was making a positive impact on their lives.”

Those involved say the program is a good way to bring the residents together with younger people for a mutually beneficial interaction.

Moving forward, she hopes that other care facilities and programs for people with disabilities will purchase duet bikes.

“We want to start a community riding club,” she says. 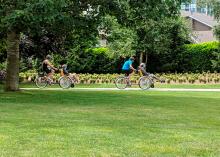 Volunteers take two residents out for a ride on the duet bikes. (Photo courtesy of Menno Place) 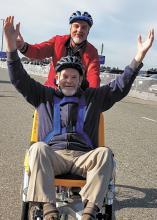 Bruce Marshall, a resident of Menno Place, is pedalled around by rehabilitation assistant Dale Carlisle, who took part in the 2018 MCC B.C. Pedaling for Hope cyclathon. (Photo courtesy of Menno Place) 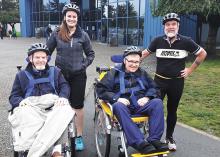