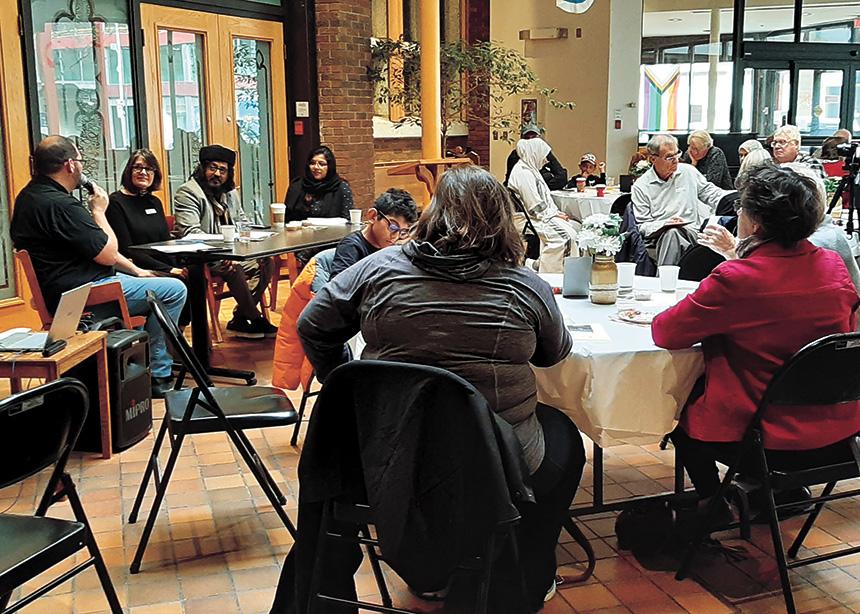 The annual Christian-Muslim Interfaith Dialogue at All Saints Anglican Cathedral in Edmonton. (Photo by Suzanne Gross)

“Our theme for the dialogue today is ‘Drawing the circle Bigger,’ ” said Scott Sharman, emcee for the annual Christian-Muslim Interfaith Dialogue, held on Oct. 29 in Edmonton. “We are asking our speakers to help us understand how our call into dialogue as Muslims and Christians also calls us to broaden the dialogue further. In particular, the way that Christians and Muslims living in this land we call Canada each have a responsibility to pursue right relations with the First Peoples in whose traditional territories we live.”

“The topic was chosen in part because of the recent visit of Pope Francis to Canada as part of a penitential pilgrimage among the First Peoples,” Sharman continued. “It also has a special urgency because of the Calls to Action of the Truth and Reconciliation Commission that address religious communities. While some of these calls to action are directed in particular ways to Christian churches and institutions, there are also interfaith dimensions.”

The panellists, Christina Conroy from Ambrose University in Calgary, and Sadique Pathan, outreach Imam at Al Rashid Mosque, were asked several questions on the topic:

Suzanne Gross, the bridgebuilding facilitator for Mennonite Church Alberta, shared a number of themes that emerged through the panellists’ answers and table discussions.

Although our Scriptures did not all include teachings on collective guilt or collective sin, the concept of collective responsibility emerged as a guiding principle as we navigate harms from the past. We reflected on the Christian concept of Jubilee, which is making things right economically, and the Islamic concept of balance, which is about justice in that our behaviours contribute either to God’s mercy or to God’s wrath. Both concepts invite us to live actively into a spirit of recalibrating or rebalancing for justice to prevail.

The Quran starts with ourselves, encouraging believers to be critical thinkers when it comes to judging others. It calls the faithful to stand firm for justice, even if it is against yourself. The idea that reconciliation is the core work of a Christian can be found in writings of the Apostle Paul in Colossians.

On the topic of overlap with Indigenous teachings about care of, and responsibility for, ensuring a healthy web of relationships with the natural world, Conroy shared how Jesus was so often referencing nature and using natural plants and phenomena in his parables. Who was Jesus’ teacher in all of this? Likely his mother Mary. Both traditions have stories of caring for the animal world and the whole of the created world. Pathan talked about how, in the Quran, everything created praises God the creator—even the rocks—a concept echoed in the Hebrew and Christian Bibles as well.

An observation was made that governments seem to get stuck on apology, not able to move to action that brings about justice.

One table participant commented: “If government is the obstacle to addressing the systemic issues that keep us from moving from apology to justice, maybe these interfaith dialogues are even more important!”

Reconciliation starts with an acknowledgement of harm and apology, but can’t stop there. Muslims and Christians need to convey intent that “we are with you; what do you need?” when it comes to reconciliation with their Indigenous brothers and sisters.

The event was hosted by All Saints Anglican Cathedral in Edmonton. Gross helped organize the event and find a location.

“We had hoped that the event would be hosted by Sacred Heart First People’s Church, the church where Pope Francis visited in the summer, but they are doing renos, and the work was not done in time, so we had to find a different place,” she said. 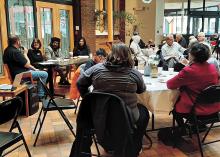 The annual Christian-Muslim Interfaith Dialogue at All Saints Anglican Cathedral in Edmonton. (Photo by Suzanne Gross)