Don’t be afraid of your weaknesses 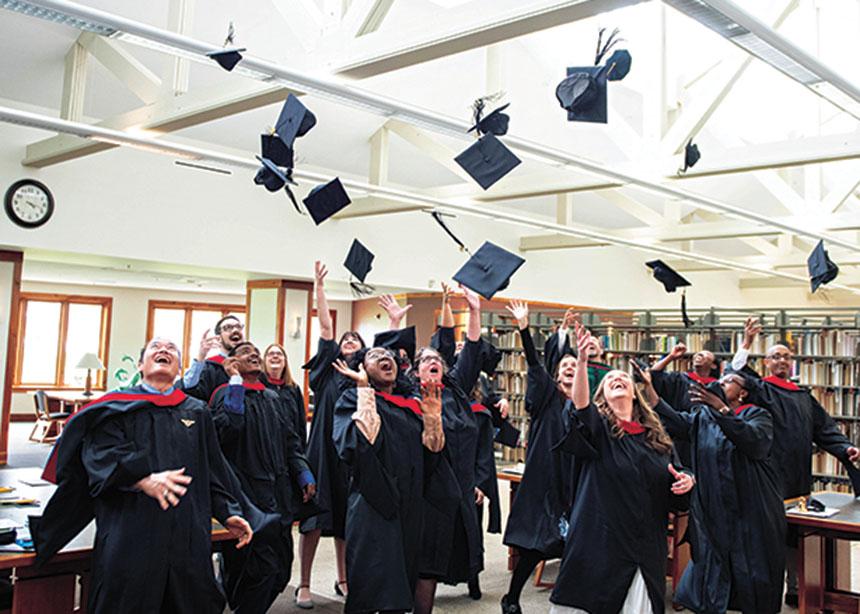 The 2022 graduates of Anabaptist Mennonite Biblical Seminary in Elkhart, Ind., celebrate together by tossing their caps in the air in the seminary’s library following the commencement service on April 30. (Photo by Jason Bryant / AMBS)

For wisdom and insight to face today’s leadership challenges, César García invited participants at the Anabaptist Mennonite Biblical Seminary (AMBS) commencement service on April 30 to look to the story of Moses and his call to serve in Exodus 4:1-17.

Around 140 people attended the service in person in the seminary’s Chapel of the Sermon on the Mount. Nearly 80 people watched the event via livestream, with around a third of them viewing from outside of the United States.

In his commencement address, García, the general secretary of Mennonite World Conference (MWC), noted that, of the five times that Moses questions God’s call to serve, only one of them upsets God: Moses’ refusal to act.

“A leader takes responsibility and acts,” García said. “If you see a need, probably God is calling you to be part of the solution,” said García, of Bogotá, Colombia, who now leads MWC from its office in Kitchener, Ont.

In the biblical narratives, he continued, God invites people to act. “God does not do it for us; God acts through us!” he said. “True leaders do not just manage. They create the conditions through which God’s purposes can be fulfilled.”

García pointed out that, in Exodus, how a leader commits is crucial, and he invited his listeners to reflect on three leadership lessons from Moses’ story:

Commit by looking back at the past.

García noted that God is revealed as the God of Abraham, Isaac and Jacob four times in Exodus 3 and 4, and that God invites Moses to define his ministry and vision by looking back at the past.

Commit by seeing the best in others.

In the second sign that God gave Moses to use in case the people didn’t believe in his mission—Moses’ hand being affected by leprosy—García saw a connection to God warning Moses to choose his words carefully in speaking about the people of Israel. In biblical times, leprosy was considered to be related to punishment for derogatory speech.

“Remember that evil speech is one of the worst sins in the Scriptures,” he said. “Develop the ability to see the best—the great—in other people, your colleagues and those you are leading.”

García noted that, when Moses tells God that he is not eloquent enough to carry out what God is asking of him, God does not deny his incapacity or punish him for his thoughts about himself: “On the contrary, it seems that God agrees with him! I am more and more convinced that God chooses people to lead not because of their capacity and talents, but because of their weaknesses.”

García encouraged his listeners not to be afraid to recognize their weaknesses. He pointed out that, in Greek mythology, heroes faced battles against their enemies but, in biblical narratives, “the major conflicts we have to face are against ourselves: our fears, hesitations and sense of unworthiness.”

“That may be because, in the Scriptures, it is not people’s victories that make them leaders; it is how they cope with their defeats,” he said. “You know you are called to lead because of your weaknesses because, thanks to them, your need for dependence on God is clear and evident.”

Of the 21 graduates honoured during the commencement service, there were 14 women and seven men from seven countries: Canada, Ethiopia, Honduras, Indonesia, Nigeria, Tanzania and the United States. Eleven of the graduates are members of Mennonite Church U.S.A.; one is from MC Canada; and three are from Mennonite denominations around the world. One graduate is from the United Methodist Church, and five represent other denominations or nondenominational churches.

Mennonite colleges and universities with graduates in AMBS’s Class of 2022 include Columbia Bible College in Abbotsford, B.C., and Conrad Grebel University College in Waterloo, Ont. 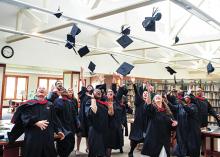 The 2022 graduates of Anabaptist Mennonite Biblical Seminary in Elkhart, Ind., celebrate together by tossing their caps in the air in the seminary’s library following the commencement service on April 30. (Photo by Jason Bryant / AMBS) 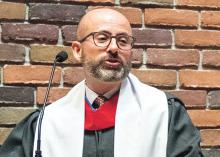