‘Do you know any Mennonites?’ 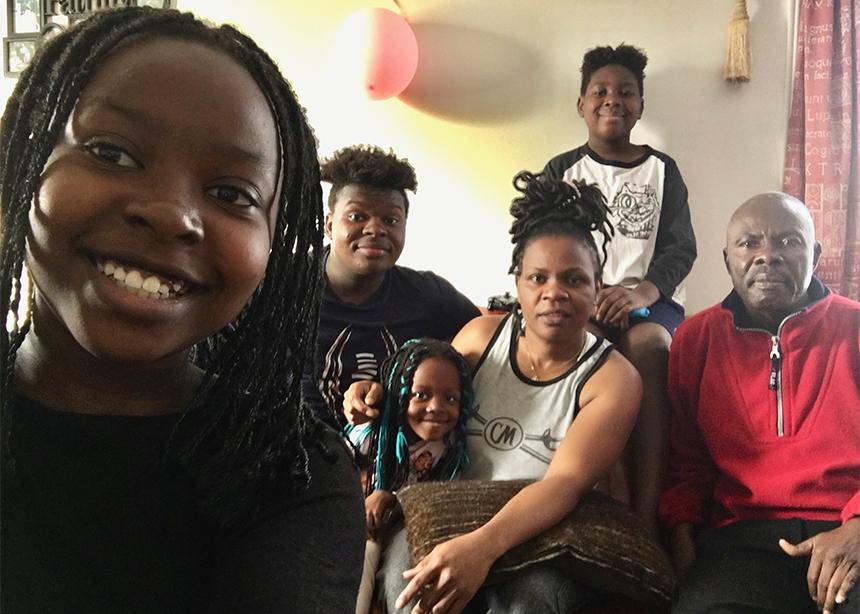 Pictured from left to righ: the Bena family is composed of Sephora, Sidney, Sikila with mother Mamissa, Stony, standing, and father Ben. (Photo courtesy of the Bena family)

In 2005, a Congolese Mennonite couple with a 15-month-old baby made a desperate plan to flee through Europe and fly to Calgary to safety. Even though the second Congo war had officially ended in 2003, a thousand people were still dying daily of disease, starvation and violence. Everyone was suffering and afraid.

When Ben and Mamissa Bena and baby Sidney landed in Calgary, they had to report immediately to Immigration since they had not gone through any of the official channels. For this reason, it took 10 years for them to become permanent residents. In the meantime, the Canadian government agreed it was not safe to send them back to their home in the Democratic Republic of the Congo and released them.

The Benas had decided to go to Calgary since a friend had recommended it. But when they left the airport, they were not prepared for winter and had nowhere to live. Right away, they asked if anyone knew “the Mennonites.” The Mennonites were their family. The Mennonites had been in the Congo for more than a century, and the family was part of the Mennonite church.

Unfortunately, there was nowhere to go but the streets. They were sent to a French-speaking charity first and they eventually connected with another that offered help to homeless people who have gone through trauma. Then they connected with Inn from the Cold that bussed them each evening to a place where they could spend the night. They were the only newcomers.

Still no one knew how they could find the Mennonites.

Finally, after the Salvation Army found them a room to rent on 26 Avenue, they discovered Calgary First Mennonite Church was only a few blocks away. Ben found the phone number and called the church. He spoke with Marv Thiessen, who was the pastor at the time. According to Ben, he tried to explain his story. With emotion, Ben says, “The pastor hung up the phone and was at our place in minutes. Literally minutes.”

This began an enduring and endearing friendship.

“Every day, Pastor Marv or Craig [Wiens], the youth pastor, would check on us, call us and bring us to the food bank,” Ben says. “They came so close to us.”

One day, Ben and Mamissa had no money left and they wondered how they would even buy bus tickets to get to their English classes. When they arrived home, there was a large gift basket on their doorstep full of food items. To this day, they don’t know who left it there, but they will never forget it.

Although warmly welcomed, they found everything to be a form of culture shock. At church, the pastor prayed, but when he finished no one enthusiastically said “Amen!”

While the Benas believe that there are no good or bad cultural norms, it still wasn’t easy, says Mamissa. “We praise God and sing in a different way,” she says. “No one moved in worship. It’s like faith is between you and your God. People don’t show their feelings.”

There was so much to learn and they struggled to understand new ways in their new land. Christmas was one holiday that was quite different.

In the Congo, gift giving is not really part of their tradition. On one occasion they were asked, “What do you want for Christmas?” Mamissa says. “It seemed like such a weird question. In Congo, you receive with gratitude whatever you are given. I didn’t know how to answer. . . . Christmas isn’t about presents. It involves lots of food and drinks to share. People come with no invitation; they just come.”

The Benas clearly express their gratitude to the church and to God, but they would love to see more people drop in for coffee.

One of the many strengths they see in the Mennonite church is its willingness to meet people where they are and to walk with them. “They are more open-minded here and not as judgmental,” says Mamissa, who thinks this is something that could be passed on to the Mennonite churches in the Congo.

That being said, the Benas wonder if their Canadian congregation would be open to exploring the Congolese style of worship from time to time, suggesting it could be an opportunity for them to invite their friends to experience something new.

When asked why they stay in the church when it’s so different than in the Congo, they replied, “Because we are Mennonites. We never thought to leave. They are our family, and it is where we feel safe.”

After 15 years in Canada, the Bena family now includes four children, who are all Canadian citizens. Mamissa is working towards a degree in social work from Bow Valley College and Ben is upgrading his English. 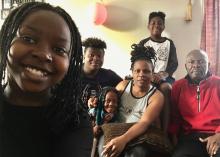 Pictured from left to righ: the Bena family is composed of Sephora, Sidney, Sikila with mother Mamissa, Stony, standing, and father Ben. (Photo courtesy of the Bena family)