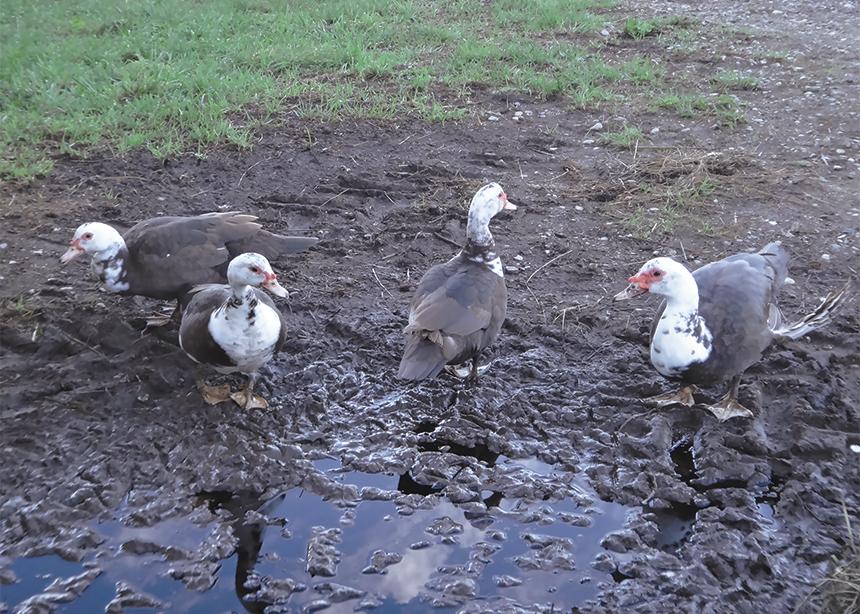 Muscovy ducks dabble in one of their favourite mud puddles in the Wiederkehrs’ barnyard. They are kept for eggs, meat, fly control and because they are fun to have around. (Photo by Theo Wiederkehr)

My family farms, raising plants and animals on a small scale—40 hens, five cows, two sows—both to feed ourselves and as a source of income. So I read with great interest “What would Jesus think about factory farms?” a critique and encouragement to move towards a vegan diet by Sandy and Jason Yuen.

I have deep doubts regarding the sustainability of agriculture and our society. Some of these doubts come out of my own experience raising animals. In my family’s farming, we have deliberately tried to address the animal-welfare concerns around factory farms.

Our animals all have access to the outdoors all summer, with most living entirely on pasture land while the grass is growing. Our cows’ calves are not snatched from them at birth; instead, we leave them with their mothers full-time for the first month and then share the milk supply, with us taking half and the calf taking half, for months after that.

But economic problems remain. Although we spend a lot of time and effort caring for our land and its creatures, farming on our scale is not profitable, and my father works another job full-time to support our family’s modest lifestyle. From our experience, it seems that consumers will not pay enough to make small-scale, careful, food raising a realistic career.

Factory farming is one way that some farmers have attempted to solve this problem and, based on our experience, we understand why they might move in that direction. But factory farming does massive harm to the environment and, even in our own careful farming, some of its ecological problems remain. Chief among these are two problems:

Both of these problems have led us to believe that our farming—and all agriculture that feeds people who live far from the farm—is unsustainable. However, I don’t believe that veganism or vegetarianism are tidy solutions to the problems in how we grow food and eat it.

Vegetarianism for environmental or animal welfare reasons makes little sense. Both dairy and eggs are produced only by female animals, which means that half the population of dairy cattle and egg-laying chickens—the males—must be eliminated somewhere, as well as the elderly, unhealthy or unproductive females. Producing dairy and eggs produces a lot of meat as an inevitable byproduct.

Veganism seems like a more logical way of addressing the problems of careful resource use and animal welfare. But, when viewed only from a consumer’s perspective, it misses several things that I have observed from my producer’s perspective.

Eating only plant foods does not eliminate animal suffering. Last year, I was preparing soil for planting dry beans by hoeing it. I was happily working when I was suddenly interrupted by the ground writhing under my hoe. I had accidentally struck a little red-bellied snake that had been hidden from my view as it hunted its prey underground.

Of course, this sort of thing happens hundreds or thousands of times while farmers work their fields. Plant-based diets do not eliminate suffering, although they may make it less intentional and visible.

But I have a second difficulty with veganism. I don’t see a way to live a vegan life, as a Canadian, without relying on non-renewable resources. Tractors, combines and trucks all depend on fossil fuels to operate, and therefore cannot be part of a food system that cares for creation, if we take anthropogenic climate change seriously.

I heartily agree with the Yuens that factory farms are an immoral way to work with animals, and that we need to make personal changes to the way we live to address the wrongs that we are aware of.

But I think that shifting where we buy food—or what foods we eat—can simply obscure our sins more, as in my story with the snake. Instead, I believe that, when and wherever possible, we should take off our boots and dig our toes into the actual soil that feeds us.

Learn to garden, if you can find anywhere to do so. But don’t just grow tomatoes and lettuce; learn to grow the crops that are your staples, and which farmers grow in big fields. Raise animals, if you can, even if it’s only a couple of hens.

Even if those projects are beyond your abilities or resources, consider how all the food you eat is grown, and try to trace it back through the people who work with it, to the land. If possible, get to know your farmers, and search for ways to partner with them, to make it more possible for them to take the time and care to raise food in a thoughtful, loving, Christian way.

Theo Wiederkehr is a 24-year-old farmer who often feels that he is just beginning to learn how to work with other creatures. He is part of Hanover (Ont.) Mennonite Church. 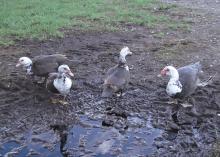 Muscovy ducks dabble in one of their favourite mud puddles in the Wiederkehrs’ barnyard. They are kept for eggs, meat, fly control and because they are fun to have around. (Photo by Theo Wiederkehr) 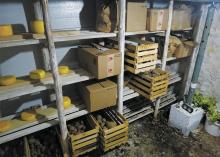